The Church of St Catherine also known as Temple Church, a Grade II* listed building, lies in the small hamlet of Temple not a great distance from the busy A30 which bisects Bodmin Moor, but, far enough to not be affected by traffic noise.

The sleepy backwater feels as if it has been suspended in time and the church itself has no electricity, just candlelight. The bucolic peace and tranquillity of this moorland setting is apparent from the moment you arrive.

This tiny church was founded in the 12th century by the mysterious and secretive medieval Order of the Knights Templar after they procured a large parcel of land on Bodmin Moor.

It was the duty of the Order to protect and provide hospitality to journeying pilgrims and so it’s believed that they established a chapel on the site as a refuge for those pilgrims en route to Santiago de Compostela, Rome and of course the Holy Land itself. 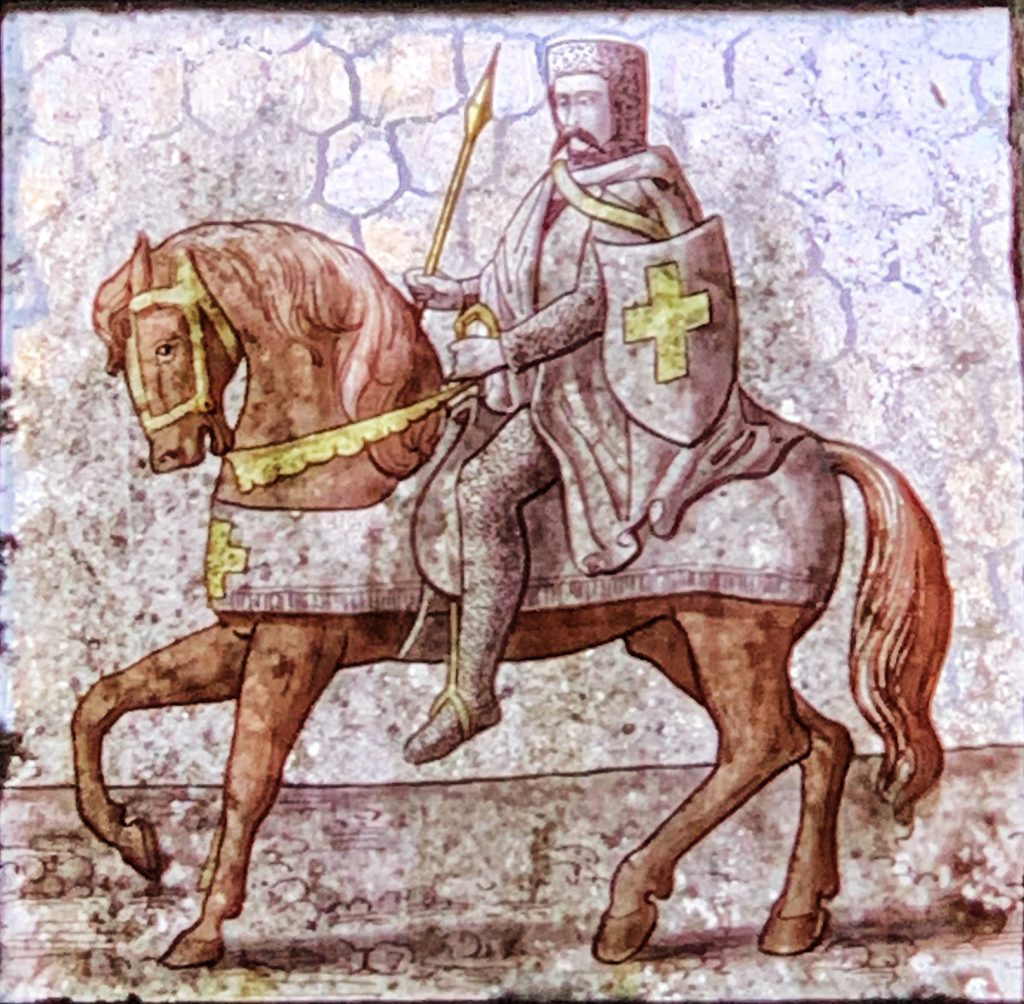 The pilgrims journeyed from Wales and Ireland and took the land route across Cornwall, perhaps first stopping over at Little Petherick, in order to reach the port of Fowey and continue their sea crossing to the continent. Sailing around the treacherous waters off Land’s End was to be avoided at all costs. 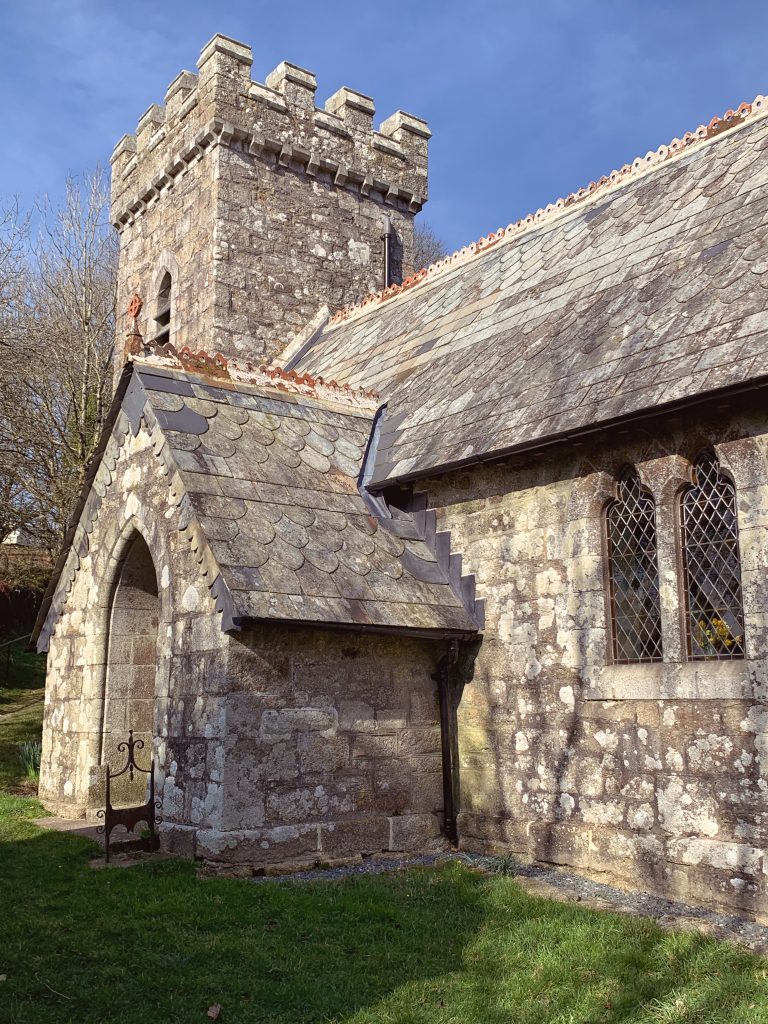 The Order of the Knights Templar was disbanded in 1312 by Pope Clement V and the property was given to the Knights Hospitallers also known as the Order of St John until all religious houses were disbanded by Henry VIII in the 16th century.

The Gretna Green of the South West

At some point, prior to the mid 16th century, the diminutive church became famous, or perhaps more appropriately infamous, as a place where ‘quickie’ weddings could take place without the need for banns to be read or a marriage licence granted; perfect for illicit elopements. This all came to an abrupt end in 1744 when St Catherine’s Church came under episcopal jurisdiction. 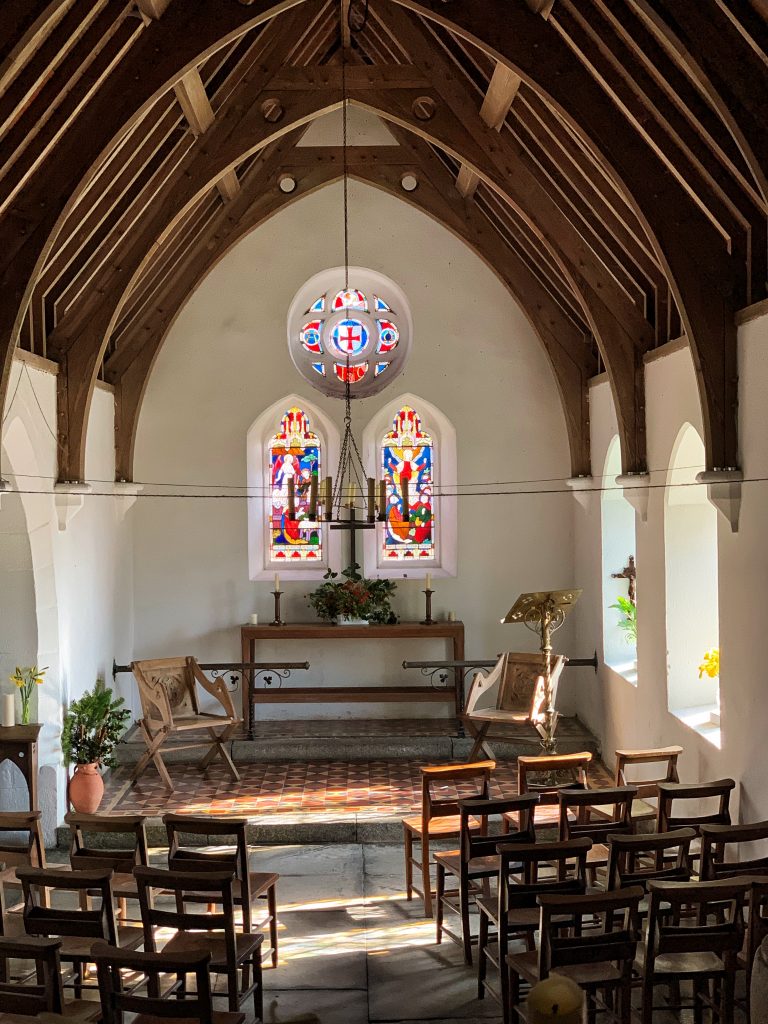 John Norden (c.1547-1625) in his Speculi Britanniae Pars: A Topographical and Historical Description of Cornwall wrote:

‘It is a place exempted from the bishops Jurisdiction, appertayninge in former times to the Templers: It is a lawless churche (as they call it) where manie badd marriages (where or howsoever contracted) are consumated. And here were they wonte to bury suche as wrowght violent death upon themselves…’

And according to John Norden victims of suicide could be buried on the consecrated ground within the churchyard which was unheard elsewhere in the country. In fact, it wasn’t until 1823 that a statute was passed to legalise the burial of suicides in consecrated ground; and it’s only since 2015 that the Church of England has granted a full religious service to such people.

Kitty Jay’s grave on Dartmoor is perhaps one of the most famous sites of a suicide victim being buried at a lonely isolated crossroads, quite literally in the middle of nowhere.

The Church of St Catherine of Alexandria had fallen into a ruinous state by the mid-18th century and no services were held there for over a hundred years.

By the 1850s there was a widespread movement for renovating ancient churches across the length and breadth of Victorian Britain which became known as the Victorian Restoration and it’s believed that over three-quarters of all parish churches were ‘renovated’ in some form between 1840-1875 – some more sympathetically than others. 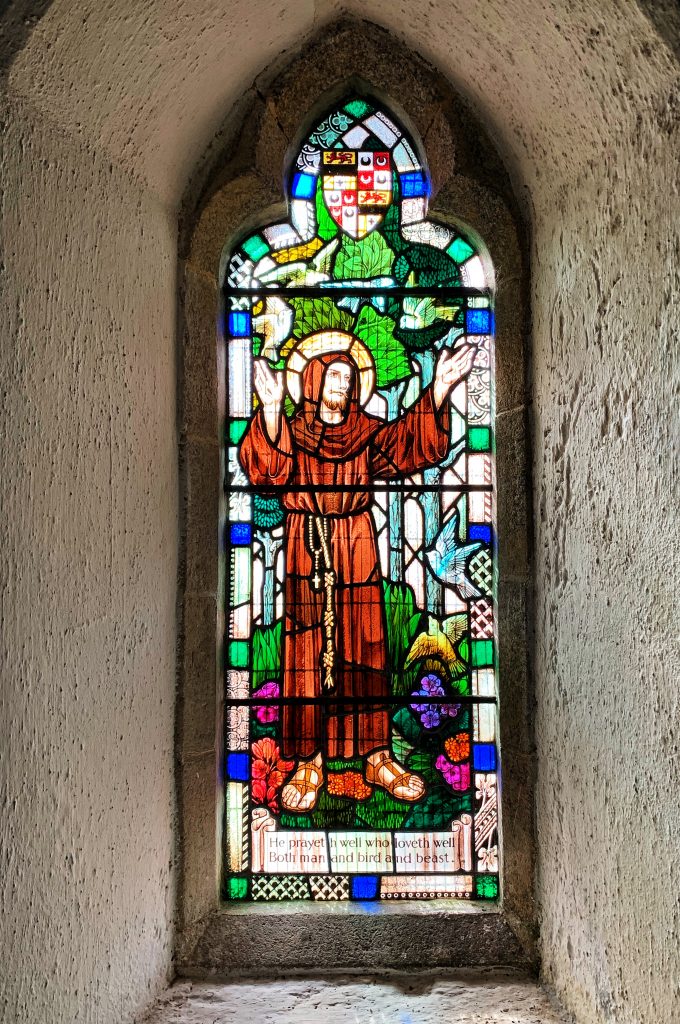 St. Catherine’s at Temple was amongst the aforesaid parish churches and Silvanus  Trevail, who was considered the leading Cornish architect of the 19th century, and was President of British Royal Society of Architects, was engaged to reconstruct the church upon its original foundations and was building work was completed in 1882-83.

Silvanus Trevail is noted for designing numerous hotels in Cornwall including the Headland Hotel, Newquay and Carbis Bay Hotel, nr. St Ives and over fifty schools across the country. 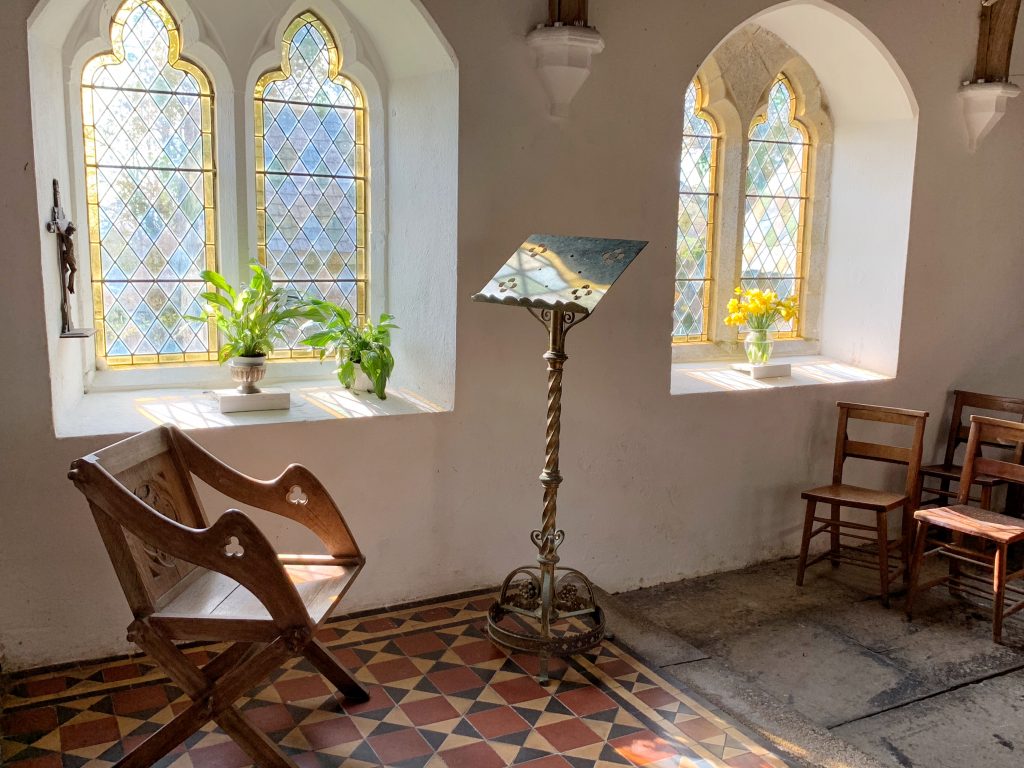 The Temple Church may have been his only religious project but the overall effect is simply stunning and as Pevsner writes in his ‘Buildings of England – Cornwall’:

‘The church, of diminutive scale but strangely impressive in its remote moorland location…The interior is of striking simplicity with whitewashed walls under a plain arch-braced roof.’ 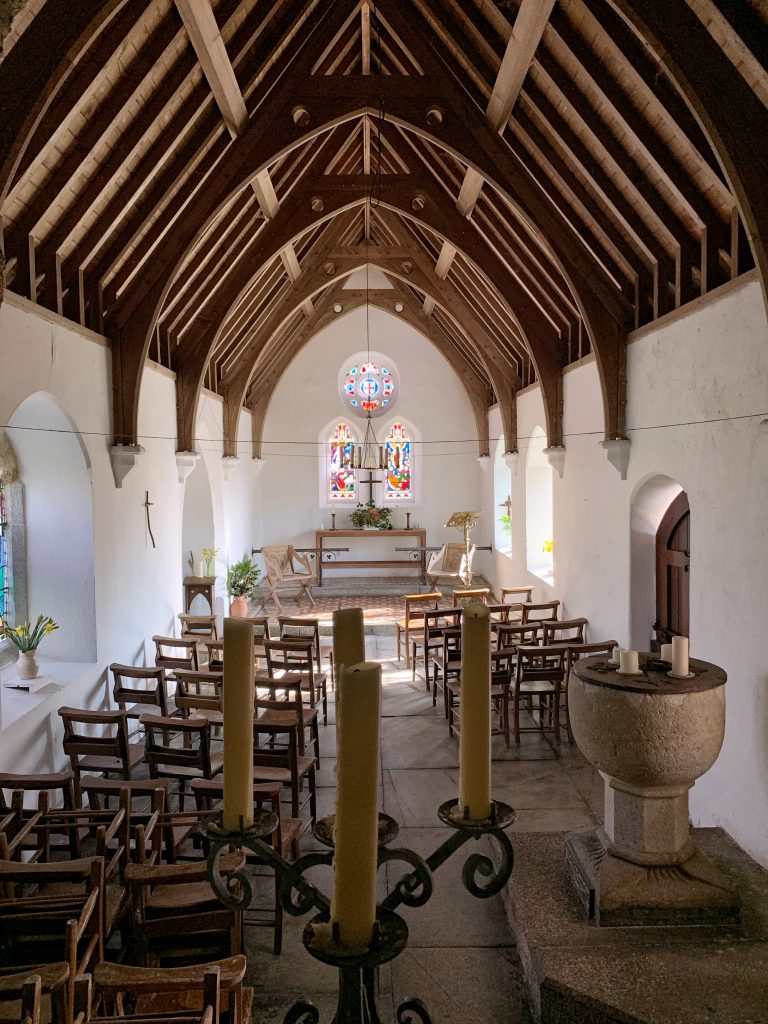 There are a few late 19th century stained glass panels with details harking back to the Knights Templar and Hospitaller such as the Templar on horseback illustrated in the Knights Templar section above and a Cross Pattee in the east window above the altar. 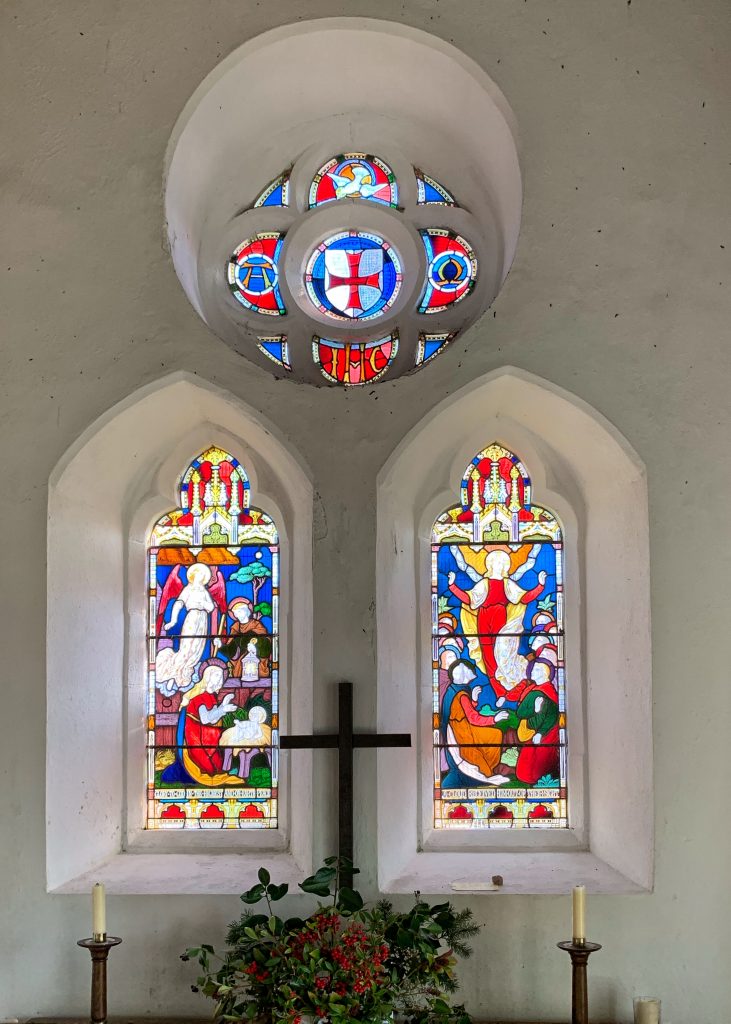 Lanhydrock – A magnificent estate owned by the National Trust offering a fascinating glimpse into the upstairs/downstairs life of a late Victorian country house.

Launceston – The ‘Gateway to Cornwall’ with a magnificent Norman castle, interesting museum and an unusual granite carved Church

Blisland – An attractive moorland village with a quirky pub and beautiful Church.

A Brief Guide to Lydford: A Dartmoor village once home to Rough Justice 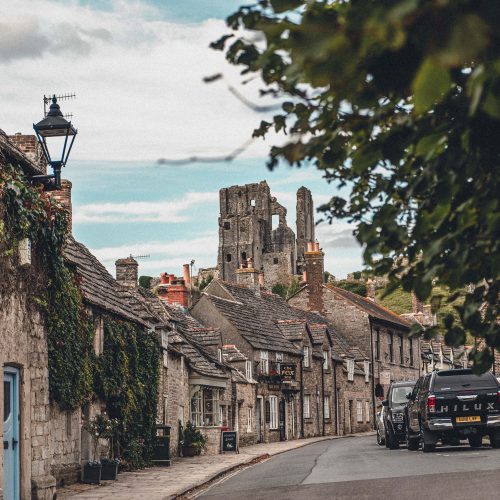 172 shares
escapetobritain.com is a participant in the Amazon Services LLC Associates Program, an affiliate advertising program designed to provide a means for sites to earn advertising fees by advertising and linking to Amazon.com. As an Amazon Associate I earn from qualifying purchases.