Mention the name Avebury and the awe-inspiring prehistoric Henge and Stone Circles spring to mind. However, these are only one piece, a large one to be fair, of the intricate historical jigsaw that makes up the extensive site of Avebury. Indeed, the entire village of Avebury is also worth a visit, including Avebury Manor.

A village was constructed that intertwines with the ancient monument and includes the ancient Church of St James and the must-see attractive Avebury Manor which are both often overlooked by visitors to the area, but that you should definitely visit should you get the chance to visit this pretty area of England.

The Benedictine Monks at Avebury Manor

King Henry I gifted lands that included the site of the present Avebury Manor to William de Tancarville, Chamberlain of Normandy and England and a close adviser to the king.

In 1114, William de Tancarville, bequeathed this land to the Benedictine Abbey of St. Georges de Boscherville near Rouen which created an English cell at Avebury and a Priory was established shortly thereafter. This was known as an ‘alien priory’ as it was controlled by the French abbot from the Abbey near Rouen.

The monks were granted freedom from the shire by Henry I and this continued under Henry II and Richard I; they were also granted permission to create a chapel in the Manor House at Avebury.

Interestingly the Benedictines never controlled the advowson (ie. the right to put forward a person as parish priest) of the Parish Church of St James which belonged to Cirencester Abbey and this created ongoing tension between the two Abbeys.

Avebury was eventually sold in 1411 to Fotheringhay College which held the lands until the Dissolution of the Monasteries in the mid-16th century under Henry VIII.

It’s thought that the current Avebury Manor is built either on or very close to the original priory structure.

Dissolution of the Monasteries and Rich Pickings for the Tudor Courtiers

Following the dissolution of the monasteries there were numerous opportunities for Tudor courtiers to acquire the defunct religious properties and lands, of which Avebury was no exception. The crown granted the Avebury estate to Sir William Sharington (c.1495-1553), who in 1540 had paid £783 for Lacock Abbey, situated just 15 miles west of Avebury,  and converted it into his private residence.

Sharington was an entrepreneur with interests in ships, wool, land and even moneylending. However, he became involved in defrauding the newly formed Bristol Mint of which he was under-treasurer and even worse embroiled in a plot with Thomas Seymour against the young Edward VI. In 1549  Seymour was to lose his head and Sharington, through various political connections and with the luck of the devil, was eventually pardoned.

William Sharington sold the Avebury Estate to William Dunch (1508-1597) in 1551 for the sum of £2000. Dunch was a wily courtier who managed to avoid becoming embroiled in the intrigues and religious power struggles of the Tudor Court apart from in 1549 when he was imprisoned for a short spell, the reason for which is unclear.

He rose to prominence in the Royal Household and served under four monarchs of both Catholic and Protestant faiths, Henry VIII, Edward VI, Mary Tudor and Queen Elizabeth – a quite remarkable feat.

The Dunch family seat was in Little Wittenham, Oxfordshire which like Avebury has an iconic prehistoric landmark known as  Wittenham Clumps in the vicinity.

It’s not clear when William Dunch purchased the Avebury lands whether there was a building still in situ, but it does seem that he constructed the initial wing of Avebury Manor that we see today during the mid-late 16th century. This oldest part of the property is now the Kitchen and the Parlour.

Change of Ownership and Further Additions to Avebury Manor

The Manor was to change ownership on numerous occasions throughout the centuries and with a different family came either a further additional wing to the house or a major renovation. The blend of different styles and numerous gables make this house feel like a real family home and it’s also surprisingly easy on the eye.

The property is constructed of Sarsen, a type of sandstone found locally on the chalkland and which is the same stone used in the nearby Neolithic stone circles.

In 1937 Alexander Keiller (1889-1955), heir to a marmalade empire, purchased Avebury Manor so that he could be closer to the enormous archaeological excavations at Avebury that he had initiated after purchasing 950 acres of land in the area.

It’s thanks, in great part, to Keiller that Avebury monument has been reconstructed to what we see today and in 1943 he sold the land to the National Trust for just £12,000 – this being the agricultural value of the 950 acres.

He offered to sell Avebury Manor to the Trust at the same time but the offer was declined. However, the National Trust finally acquired the property in 1991 and leased the property for almost twenty years to tenants.

In 2011 the National Trust decided to revamp Avebury Manor and in conjunction with the BBC produced a television series called The Manor Reborn.

The premise of the programme was to refurbish the rooms in the style of previous owners spanning five hundred years from when the house was first built and recounting the history of Britain at that particular moment in time.

Perhaps the most attractive decor is that of the late 18th-century dining room that has become known as the Governor of Jamaica’s Dining Room and is designed to reflect the life of one of the occupants – Sir Adam Williamson, a professional soldier who became Lieutenant-Governor and Garrison Commander of Jamaica.

The whole house has been designed to be an immersive experience which is a far cry from most other National Trust properties, with little touches such as washing hanging on a line outside the kitchen window.

People are encouraged to play snooker in the post World War I Billiard Room and children can climb onto the four poster beds. All in all the experience makes history exciting and a palpable experience for young people.

Avebury Henge and Stone Circles – Literally a stone’s throw from the Manor is perhaps the most impressive prehistoric site in Britain.

The Church of St James – Just next door to Avebury Manor and a glimpse back in time to when the French monks would have been living at the Manor.

Lacock Abbey – Converted to a private dwelling by William Sharington and once home to William Henry Fox Talbot, a pioneer of modern-day photography.

Marlborough – A vibrant market town steeped in history and full of independent shops and galleries. For more information on this pretty town, be sure to check out our guide to the best things to do in Marlborough. 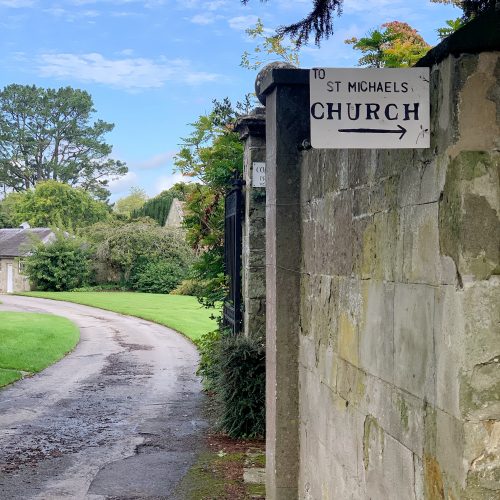 33 shares
escapetobritain.com is a participant in the Amazon Services LLC Associates Program, an affiliate advertising program designed to provide a means for sites to earn advertising fees by advertising and linking to Amazon.com. As an Amazon Associate I earn from qualifying purchases.