Kingston Deverill Church is set within the beautiful Deverill Valley that is found nestled amid ancient rolling downland. It’s an area teeming with history since man first inhabited the region more than 5,000 years ag0. The present parish church is a relatively new addition, in the scheme of things, merely dating back to the 15th century! 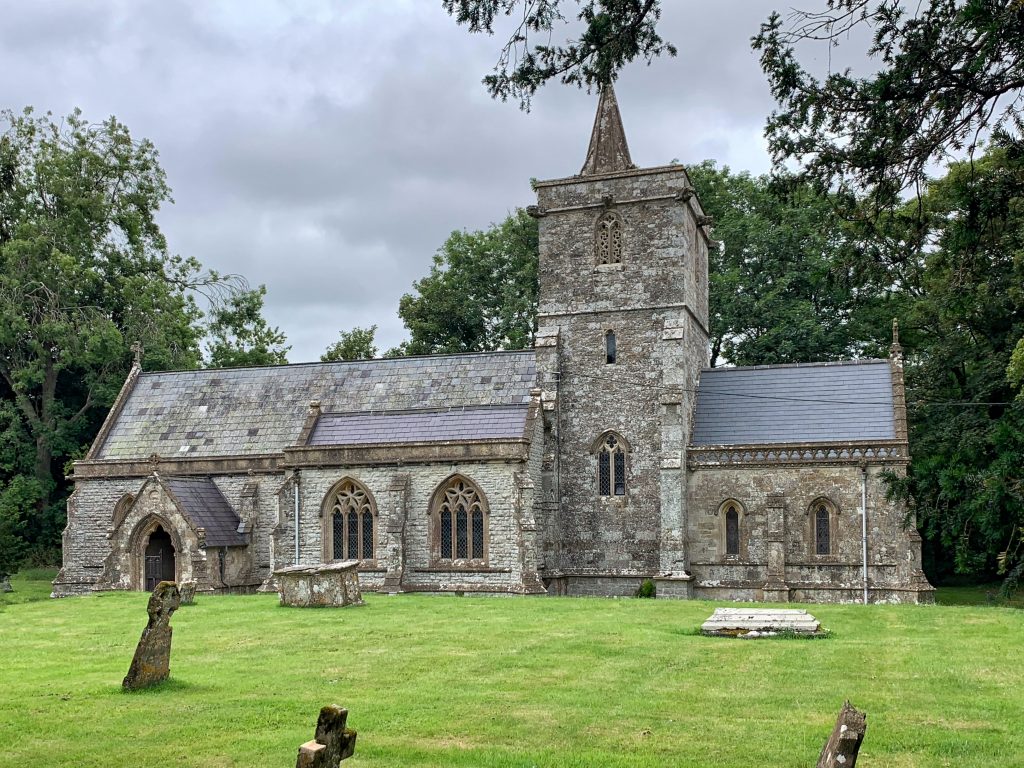 The River Deverill meanders gently along the valley floor and gives its name to this region of the Wiltshire Downs that is sandwiched between the western edge of Salisbury Plain and the Somerset Levels.

Inhabited since at least 3,500 BCE, the Deverill Valley is rich in archaeological discoveries. Unlike other areas of the country, such as Dartmoor and Bodmin Moor in the South West, where the acidic soil causes terrible erosion, the chalky soil provides the perfect terrain for the preservation of materials buried within. Pottery, animal bones, even a necklace originating in the Baltic and dating back to the Iron Age, have been discovered near the village. 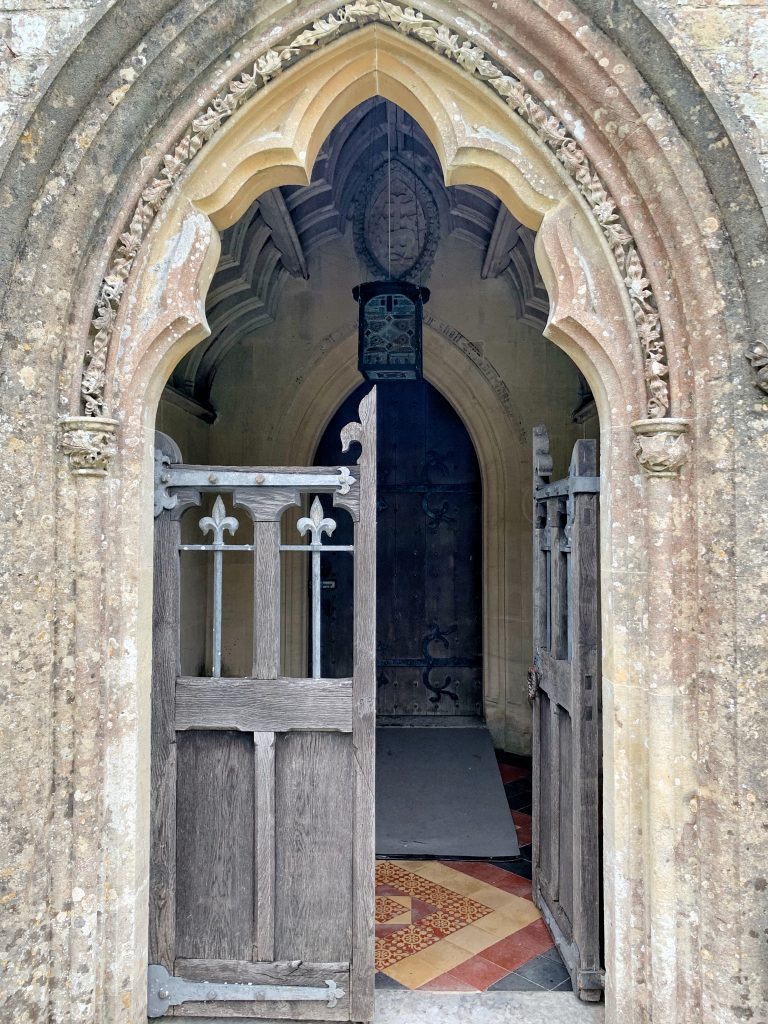 Two important Roman roads crossed at the ford in Kingston Deverill, where it’s believed there was a small roman village and a Romano-Celtic temple was discovered at Keysley Farm less than two miles away. Just a few centuries later King Alfred the Great is said to have assembled his troops at King’s Court Hill just before the battle at Ethandun against the Danes.

Prior to the Norman Conquest (1066AD) the area belonged to the canons of Lisieux in France as recorded in the Domesday Book (1086), but, at this point in time the land was appropriated by the Crown and hence the prefix Kingston that is still used today.

Highlights of The Parish Church of St. Mary the Virgin at Kingston Deverill

The existing church was built in the 15th century on the site of an earlier Saxon church. It was during extensive renovations, that took place from 1842-47 by Manners and Gill, that the font from this earlier building was unearthed in the churchyard and is now back in its rightful place. 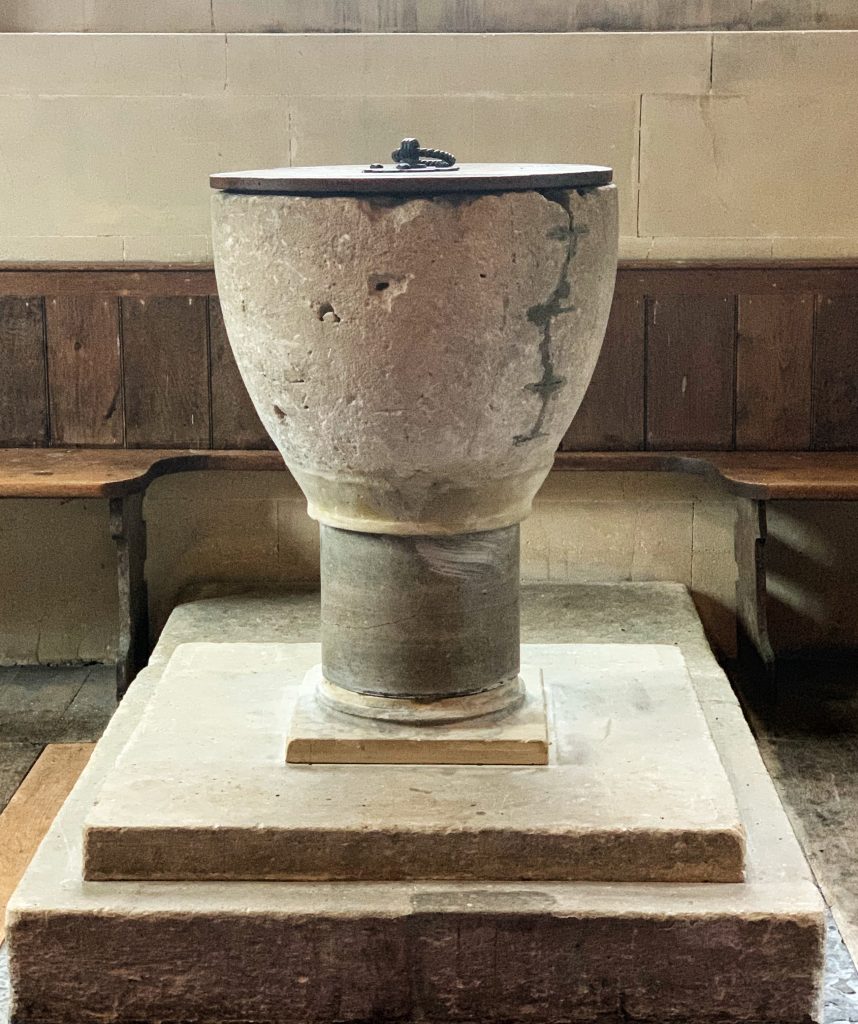 Unfortunately, there are no other artefacts from this earlier Saxon Chapel but documentary evidence of its existence is provided in the Church Register created by Bishop Osmond (d.1099), where it is recorded as a chapel dedicated to St. Andrew.

Bishop Osmond was a Norman noble, nephew to William the Conqueror and became the 2nd Bishop of Salisbury (1078-99) when the city was still sited at Old Sarum. In fact, he completed and consecrated the original cathedral of Salisbury in 1092. Osmond was canonised in the 15th century. 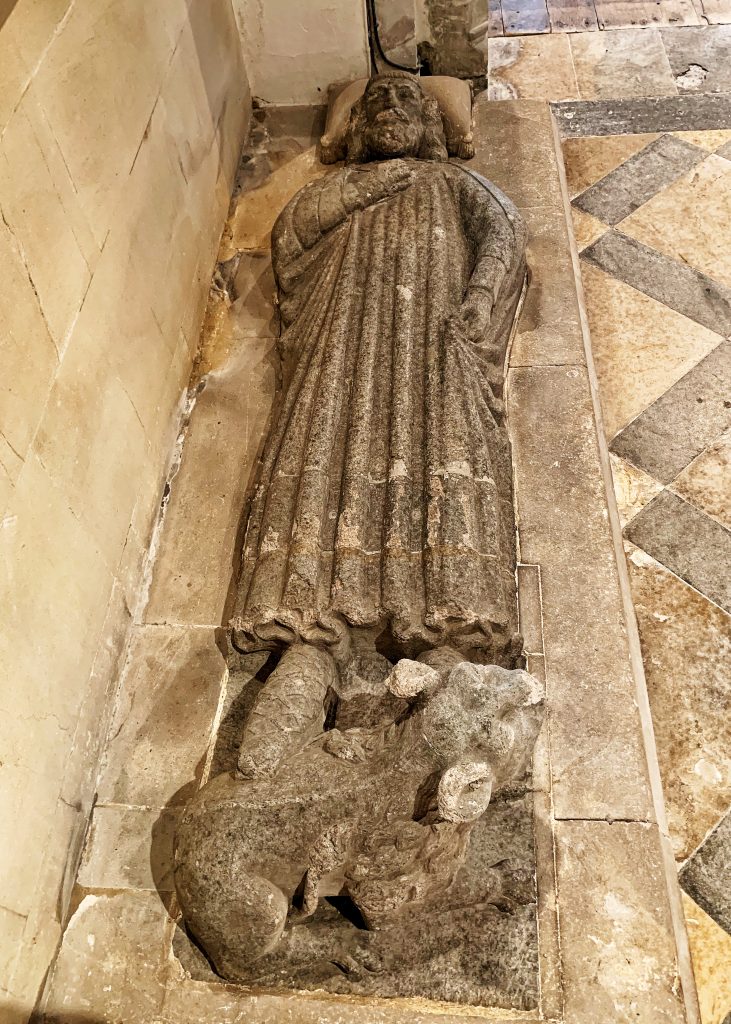 Little is known about the stone effigy of a recumbent man with a curious dog/beast lying at his feet, which is now situated on the south wall of the Chancel. It was apparently discovered during the extensive mid-19th-century renovations and is believed to date from the late 13th/early 14th century.

Similar stone effigies from this era can be seen in churches across the country including a number of well-preserved examples in Sherborne Abbey. 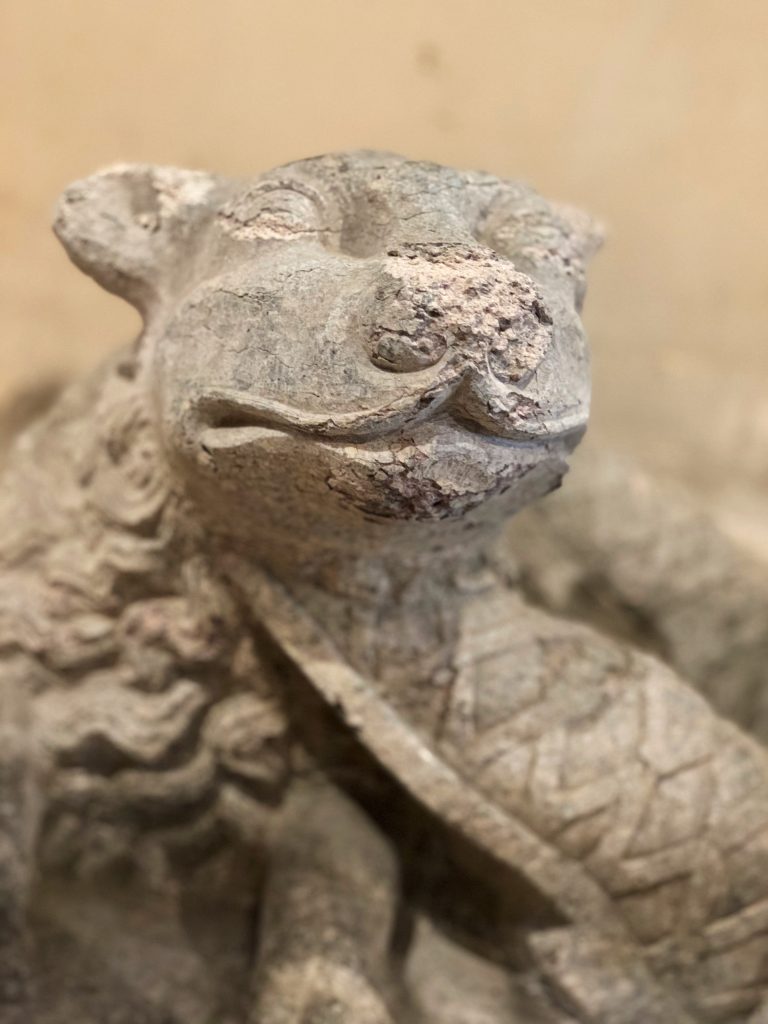 A relatively recent addition to the church is the stunning wooden sculpture of a seated Madonna and Child, of German or Flemish origin and dating back to c.1360. This was donated to the church by Herbert Leigh Holman in 1968. From 1932-40 he was married to one of the most renowned English actresses of the day – none other than Vivien Leigh who is probably best remembered as Scarlett O’Hara in the epic drama Gone with the Wind (1939). 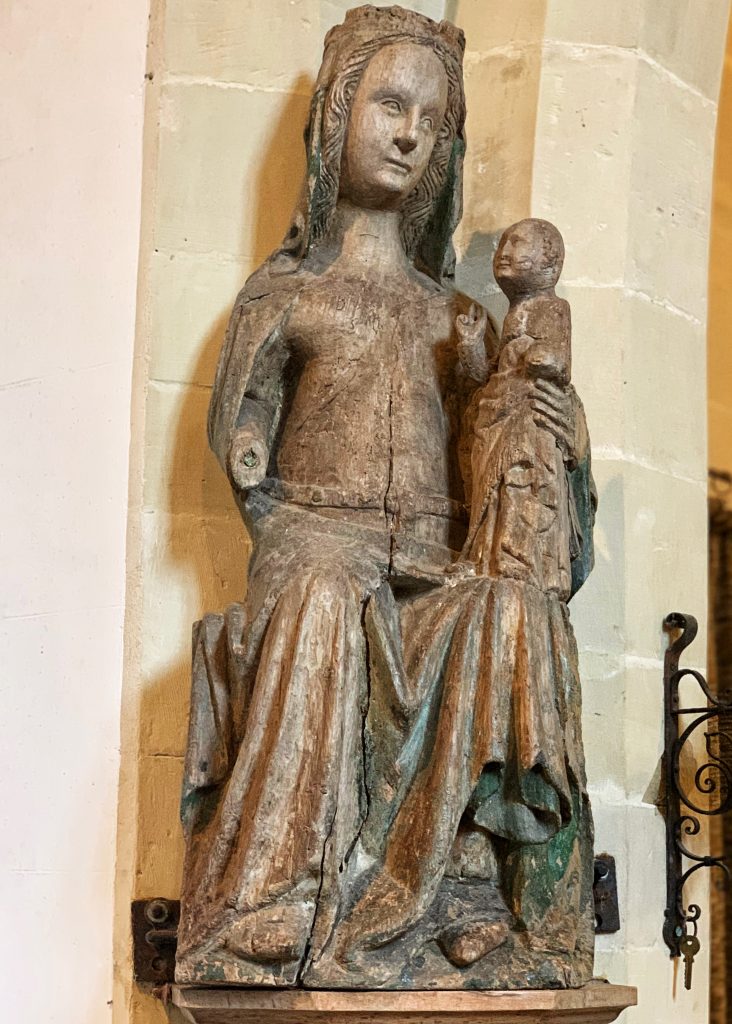 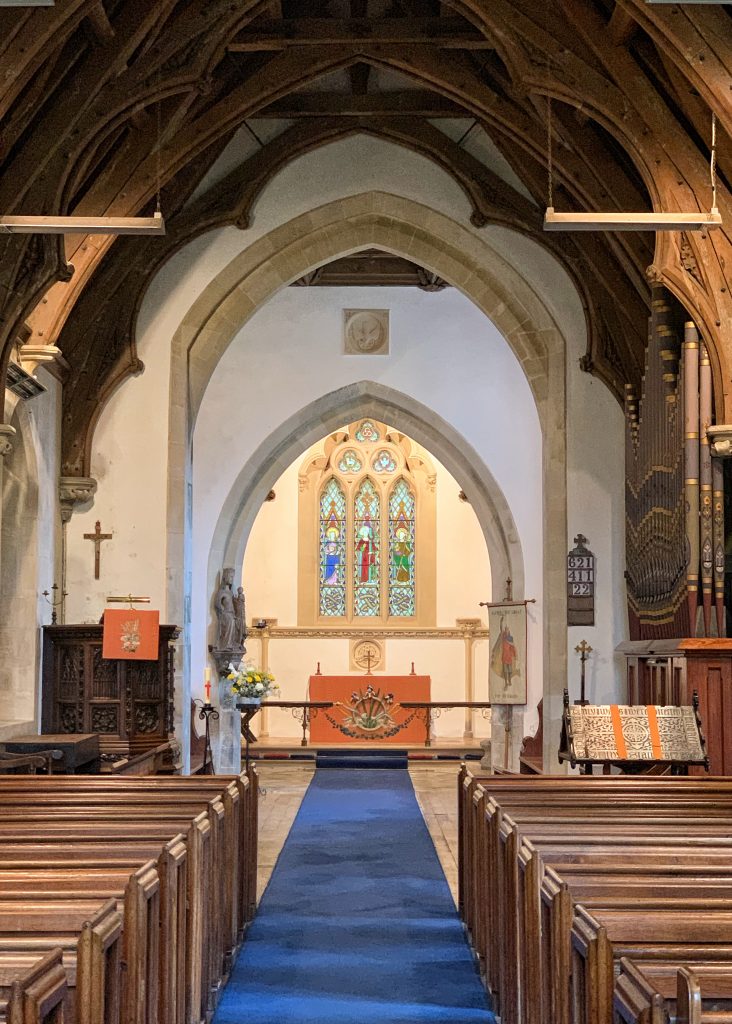 Major renovations were carried out by the architects Manners and Gill of Bath (1842-47) and paid for, in large part, by the Dowager Marchioness of Bath. The exterior remained true to its Medieval origins but the interior was modernised. New pews and roofs were installed but fortunately, the beautiful Flemish 17th century carved wooden pulpit and much of the medieval flooring were retained.

In the Chancel a stunning stained glass window by William Wailes (1808-1881) of Newcastle was incorporated into the east window. 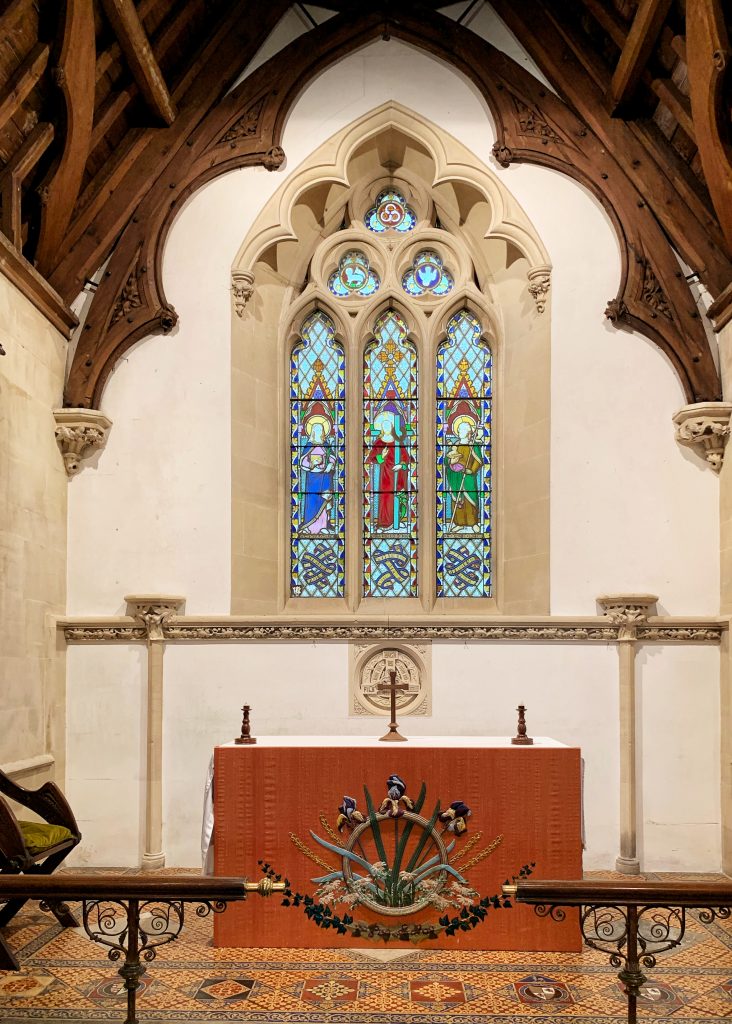 William Wailes’ workshop was one of the largest of the era and produced windows that were more similar in colour to the European producers than those of his English contemporaries. The contrast between the two styles can be seen at St. Mary the Virgin at Compton Pauncefoot

His works can be recognised by the use of bright jewel like colours including bright reds, acid greens and pale pink. Some other churches containing his works are St. Edward’s in Stow-on-the-Wold, St. Mary’s in Kingsclere and St. Mary’s in Thatcham.

… and finally –  A small 17th Century Bequest to Kingston Deverill Church that keeps giving and giving! 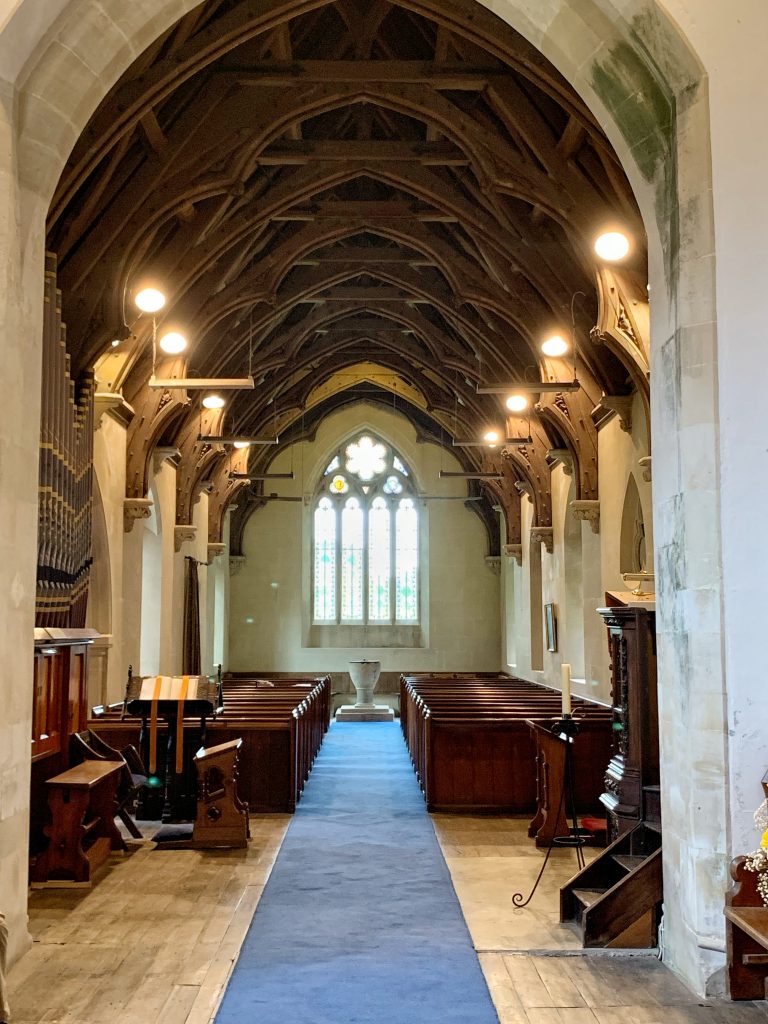 It seems hard to believe that a smallish bequest made in the 17th century is still being distributed annually over 400 years later. A wealthy parishioner, Eleanor Hurle, left a sum of £50 in 1688 which is roughly the equivalent of £12,300 in today’s money.

The interest from this Bequest was to be distributed amongst those in the Parish that needed it most in perpetuity. Over the centuries, the Trustees have, quite incredibly, made this possible. Today the Eleanor Hurle Charity has been established to hand out small grants to elderly people in need that reside within the Parish of Kingston Deverill.

IMBER – An absolute must-see. Each year, for just five days during August the abandoned village is open to the general public. Situated on Salisbury Plain, the small village was commandeered by the army in 1943, during WII. It was used as a training site for American troops preparing for the invasion of Europe. Sadly, the villagers were never allowed back to their homes.

CADBURY CASTLE – A Bronze and Iron Age hillfort that has been associated with King Arthur. Free to visit and perfect for a clear day when the views over the Somerset Downs allow you to see as far away as Glastonbury, you can’t go wrong by dedicating a couple of hours to discovering the best of Cadbury Castle.

STOURHEAD – A Palladian house and a stunning 18th-century Classical landscape garden that is truly magnificent whatever the season. Numerous paths around the lake offering breathtaking vistas and magical grottoes and Greek temples. Managed by the National Trust

NUNNEY – A picturesque village with a great tearoom and the romantic ruins of a 14th-century moated castle. If you’re in search of just one Somerset gem to visit, make it this quaint settlement! 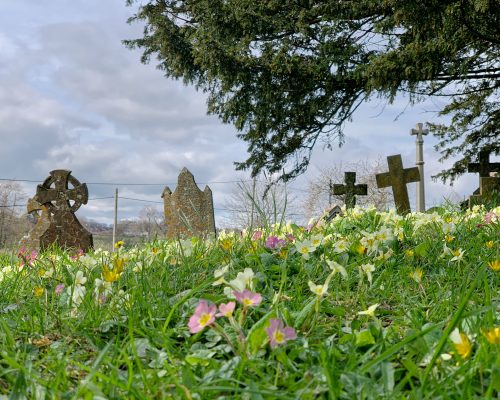