Just over nine miles from the more well known historical sites of Stourhead and Longleat lies the romantic ruins of a 14th-century moated castle. Set within a quaint village, it’s a must-see on any visit to Somerset! Sir Nikolaus Pevsner described it as “aesthetically the most impressive castle in Somerset”. 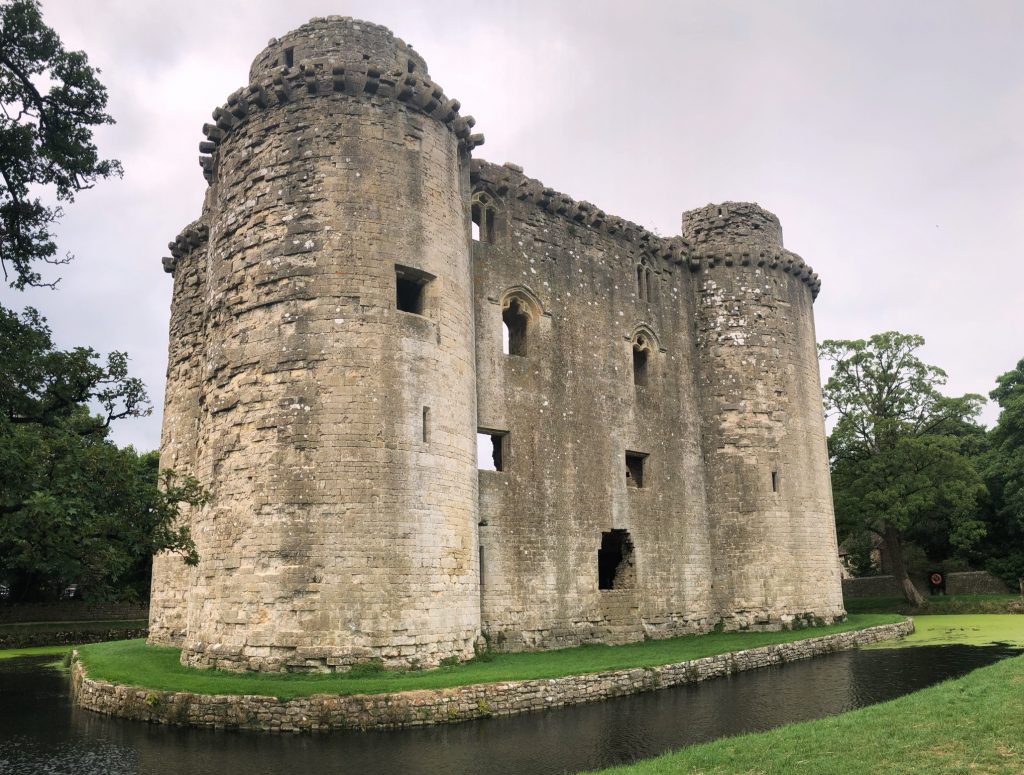 Nunney is a picturesque village, situated in the Nunney Brook valley, around two miles southwest of the market town of Frome. The historic high street sprawls along the Nunney Brook which is a tributary of the Mells River.

The village is dominated by an impressive 14th century moated castle which conjures up images of knights, steeds and shining armour! 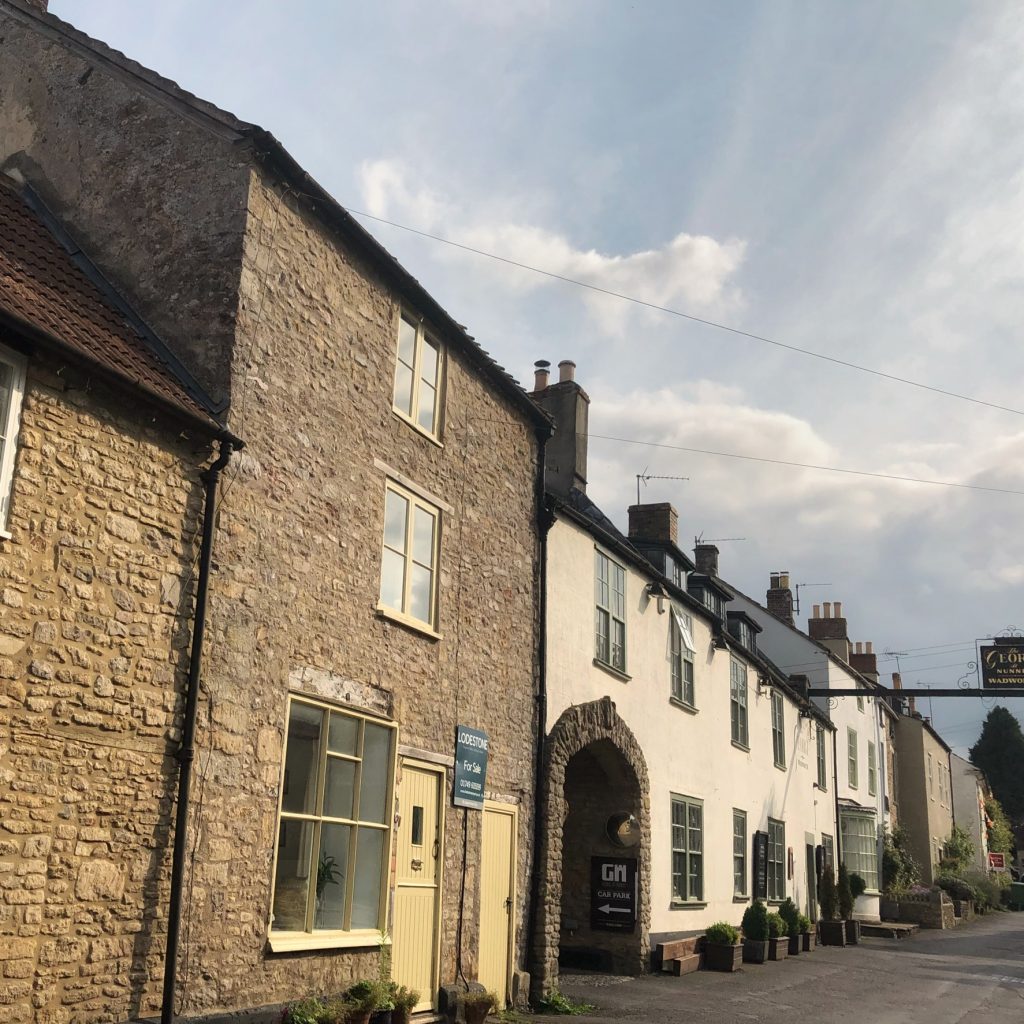 There’s a choice of two places to choose from to grab a bite to eat, relax and immerse yourself in the tranquil village life. There’s the 17th century coaching Inn The George at Nunney  serving traditional pub food or The Moat and Turret, a charming dog-friendly cafe offering light lunches and a great variety of homemade cakes. 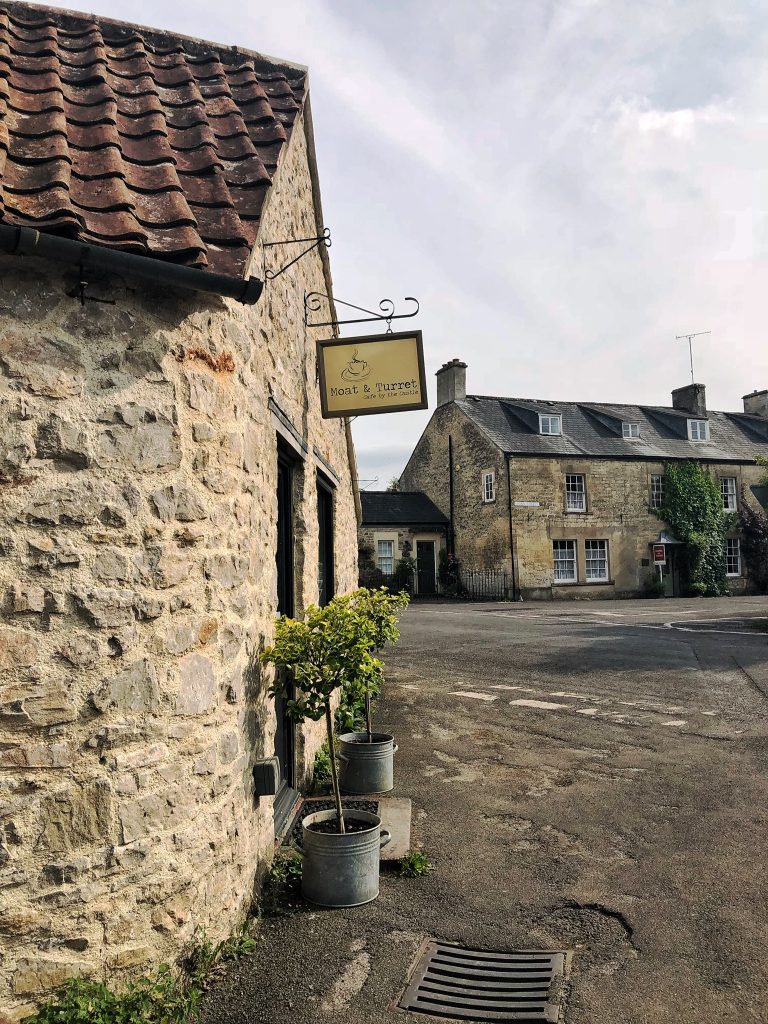 Nunney and surrounding area has been inhabited since at least Roman times. In 1860, an urn was discovered whilst labourers were ploughing a field to the western end of Horn Street. The urn itself was badly damaged but at least 249 coins were found; of which the majority were from the Dubonni tribe (early inhabitants of Somerset) and the rest were Roman.

It’s believed that the Nunney Hoard was probably hidden around 50AD when the Romans invaded Somerset. Some of these coins have ended up in the British Musuem archives. A few are at other museums,but, for the majority of the hoard, the whereabouts is now no longer known.

There was another fascinating discovery at Nunney during the 19th century. A Romano British villa was discovered a few hundred metres south of Combe Farm on the outskirts of the village. Like the coins, the mosaics uncovered have long since disappeared.

The village was recorded as Nuni in the 10th century, and the name is derived from a Saxon called Nunna. He must have been an important man, maybe a chief, and he and his people settled close to the river surrounded by marshland.

In the Domesday records of 1086 Nonin or Nouin is mentioned as a manor belonging to William de Moyon. William de Moyon had fought alongside Duke William of Normandy at the battle of Hastings and was richly rewarded for his services. He was gifted sixty-eight manors in the West of England of which fifty-five were in Somerset and Nunney was numbered among these.

At this time Nunney actually had two manors; the one in the possession of de Moyon and another belonging to Glastonbury Abbey called ‘Nunney Glaston’. The latter eventually passed to the Crown after the Dissolution of the Monasteries.

The building of Nunney Castle

The manor gifted to de Moyon came into the possession of the De la Mere family in the early 1300’s. In 1373, John de la Mare started to construct a fortified tower house for which permission had been issued under the royal licence of King Edward III.

His son, Philip de la Mare went on to complete the castle. The remains of this magnificent building is found in the centre of the village on the west side of the Nunney Brook. The moated castle that we see today would have been set within a larger courtyard.

This would have been protected by a twelve-foot bailey wall on three sides and the Nunney Brook on the fourth. Enclosed within the Bailey would have been workshops, barns etc. However, all that remains of this outer section is the Medieval tithe barn that’s, unfortunately, not open to the public.

Nunney Castle during the Civil War

The castle changed hands a number of times over the centuries until it came into the ownership of the Prater family towards the end of the 16th century. By 1642 Civil War had broken out and Richard Prater, a staunch Catholic Royalist was the occupant.

The castle had never encountered any military action throughout its history until 1645 when it was besieged by the Parliamentarians. Richard Prater refused to surrender and so the castle was fired upon. A cannonball breached the north western wall and within a couple of days he and his men had surrendered. 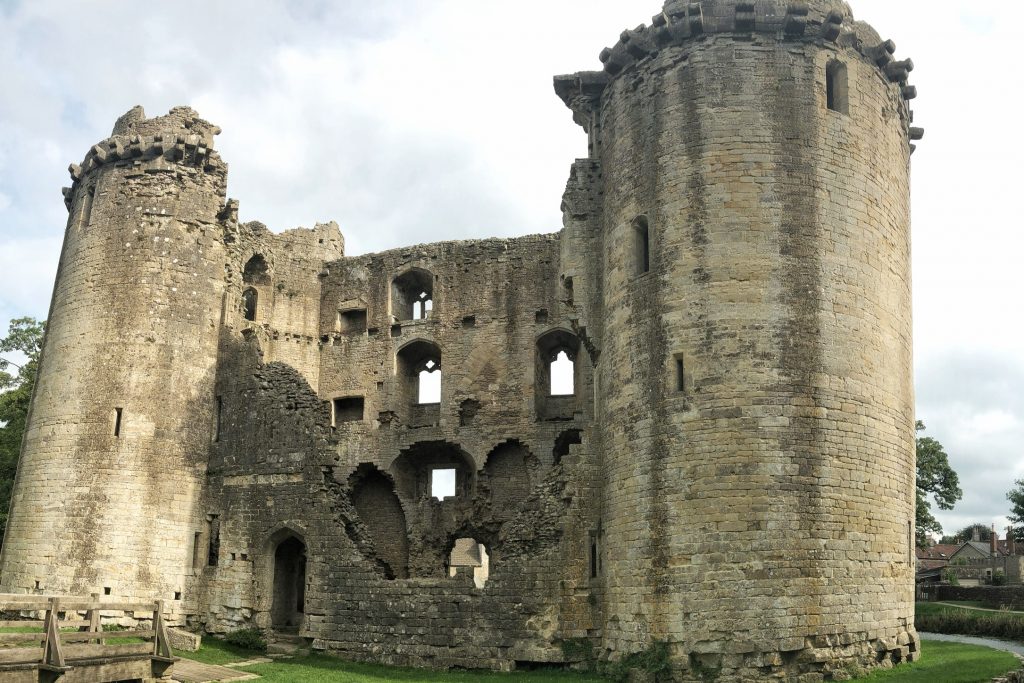 After the Civil War the castle slowly deteriorated, aided in large part by the villagers themselves! Much of the fabric of the building was removed and reused by the villagers further weakening the structure; stones and mullion windows from the castle can be seen in the Church Street cottages. By 1889 visitors were being charged a small fee to visit the ruins!

On Christmas Day in 1910 the wall damaged during the Civil War finally collapsed. It wasn’t until 1926 that restoration to the castle started; when the then Lord of the Manor placed the castle in the guardianship of the Ministry of Works (ie. the government).

From 1950, the castle as part of the 1400 acre Nunney Estate is now privately owned by the Johnny Walker Whisky family. The family has come to an arrangement with English Heritage who has taken on responsibility to maintain the castle.

ENTRANCE TO THE CASTLE IS FREE! 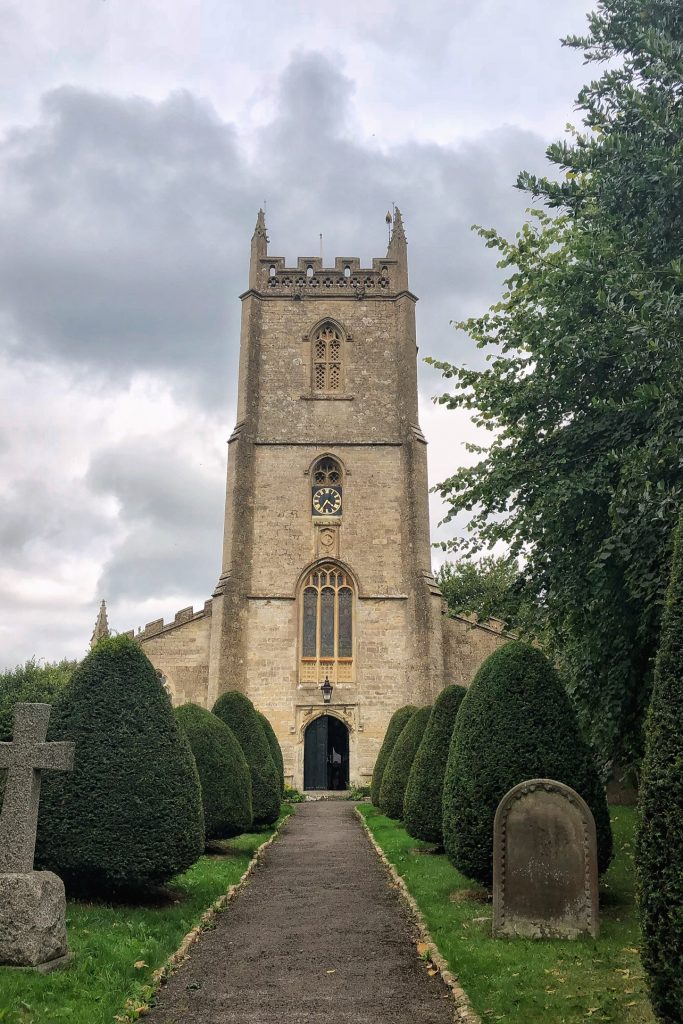 The Church of All Saints is a 12th century Grade I listed building; probably built on the site of an earlier church.  It sits on a low hill overlooking the village and being the highest point is, in fact, where you’d expect to see the castle. However, the church was there first by at least 150 years. 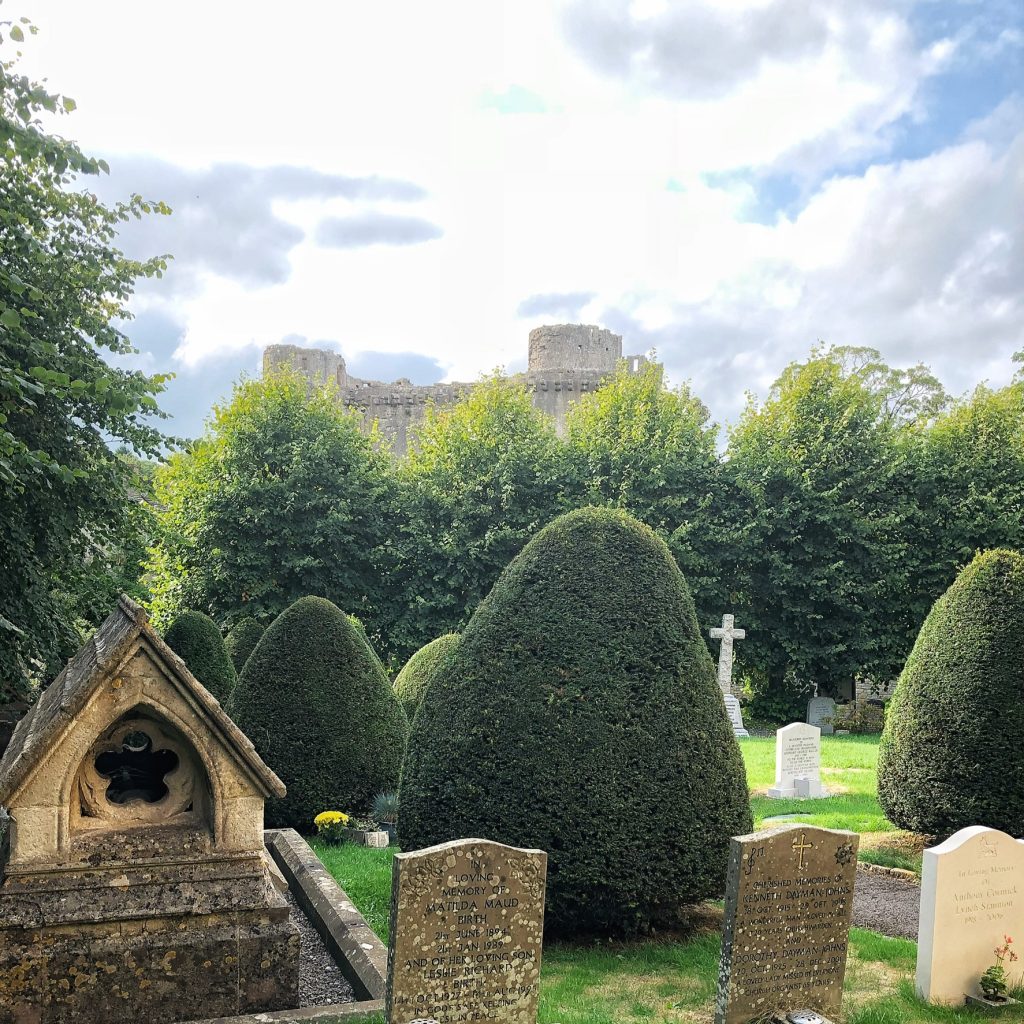 All Medieval churches were ornately decorated with pictures and painted from top to bottom including all statues and woodwork. The paintings were a didactic tool and a form of pictorial bible since the vast majority of the congregation at this time could neither read nor write. To our modern eye the overall effect would probably have been rather gaudy! 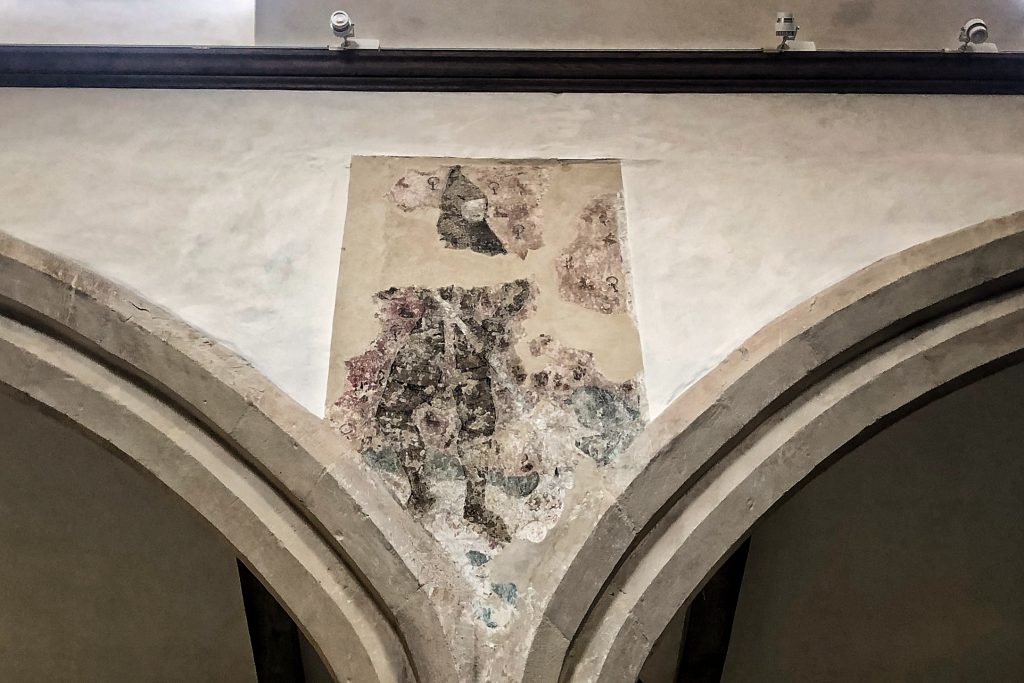 Most of these murals were overpainted during the Protestant Reformation and sadly lost forever. However, on the north side of All Saints there’s a Medieval fragment, said to depict St George, that has somehow survived. Only about 10% of Medieval Churches that are standing today have such murals remaining.

Most visitors to the Church today are probably most interested in the Tudor and Medieval effigies of the Castle’s early inhabitants. Today they can been seen almost irreverently stored to one side but that wasn’t always the case.

Originally all the effigies would have been placed atop ornate freestanding table tombs and were originally located where the organ is today. However, in 1819, it was decided that space had to be made for more pews. The effigies were unceremoniously piled together in a corner of the St Katharine chapel where they remain today. Even more shocking is the fact that Richard Prater and his wife have had their lower limbs amputated to fit into the space!

Places to Visit Near Nunney

Stourhead – A large estate including an 18th century Palladian house and world-famous garden cared for by the National Trust.

Longleat – Is an imposing Elizabethan Stately Home with grounds landscaped by Capability Brown. There’s also a Drive-through Safari Park situated within the estate.

Enjoyed reading about the best things to do in Nunney? Pin it now, read it again later: 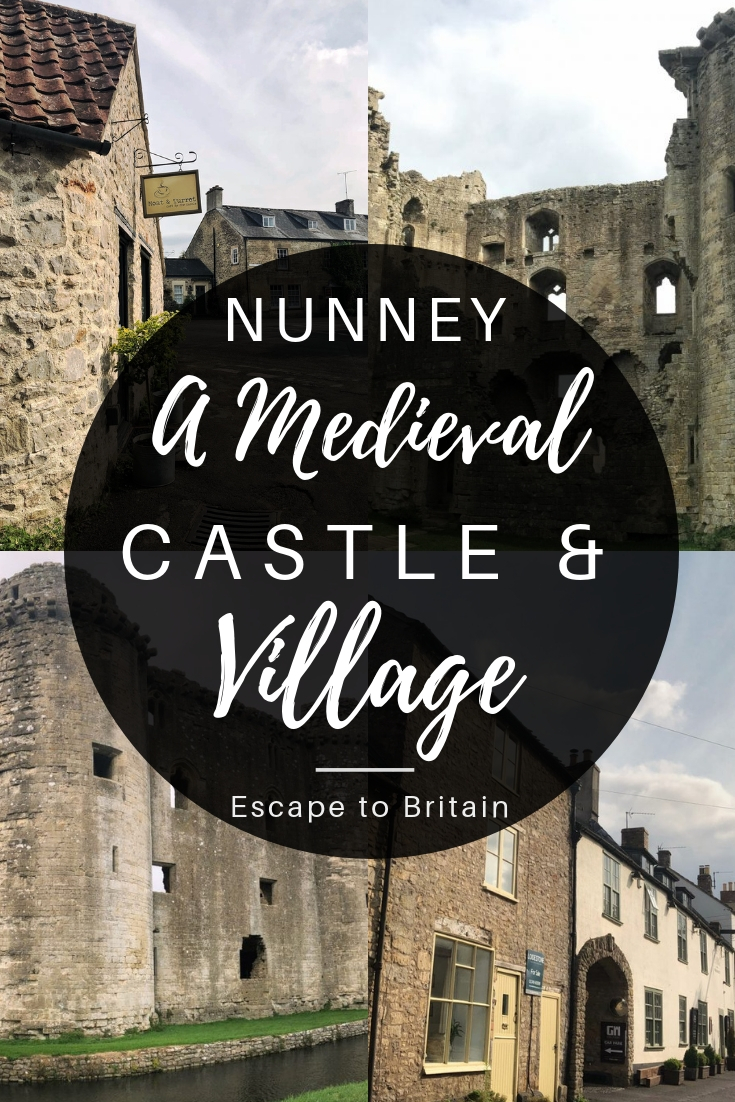 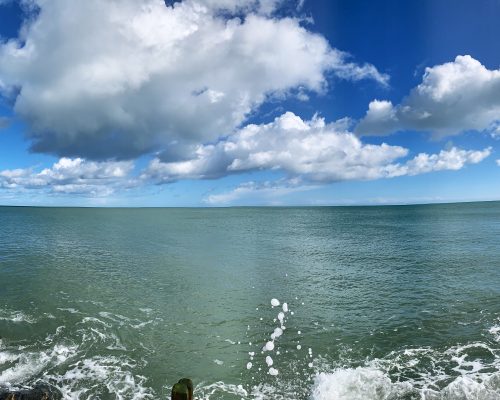 A Guide to the Ancient Benedictine Abbey at Cerne Abbas

A Brief Guide to Kingston Deverill Church of St. Mary the Virgin

89 shares
escapetobritain.com is a participant in the Amazon Services LLC Associates Program, an affiliate advertising program designed to provide a means for sites to earn advertising fees by advertising and linking to Amazon.com. As an Amazon Associate I earn from qualifying purchases.