Rock in Cornwall, a popular village with wonderful views and a passenger ferry over the Camel Estuary to Padstow, is just a stone’s throw away from the enigmatic Church of St. Enodoc. 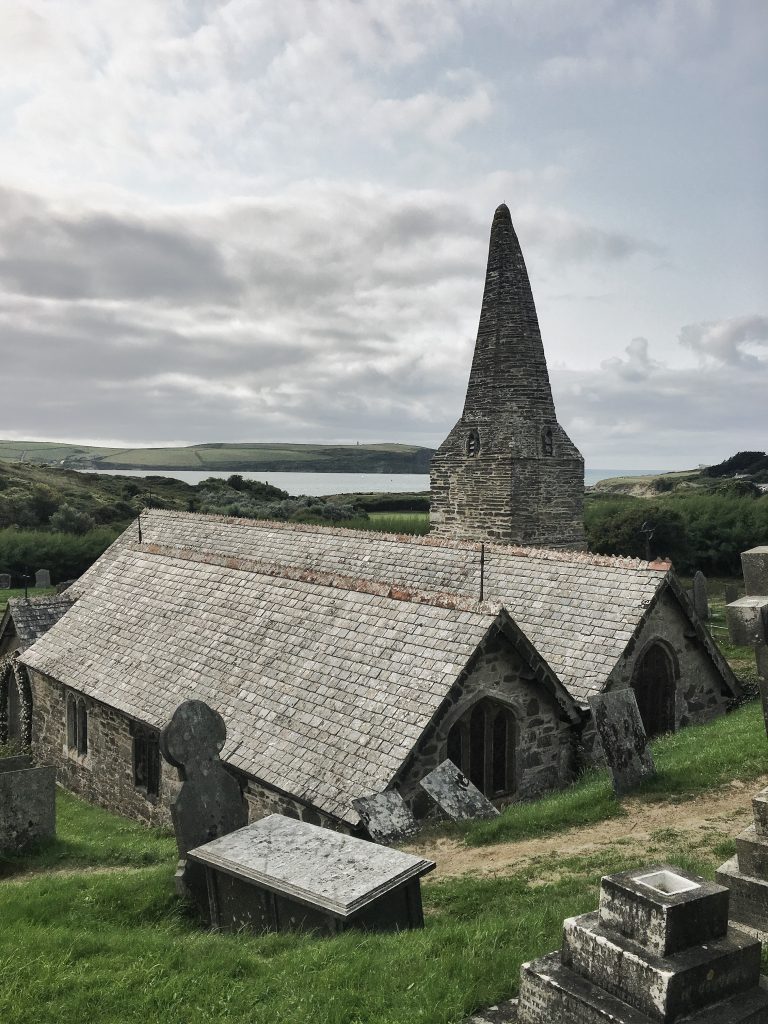 The mysterious Church of St Enodoc

St. Enodoc is found on the north coast of Cornwall within close proximity of Rock, Polzeath and St. Minver. Padstow is just a short passenger ferry ride across the Camel Estuary.

The church is one of two chapels in the parish of St Minver and at one time was known as the North Chapel and St. Michael’s in Porthilly was the South Chapel – the main parish church being St. Menefreda in the village of St. Minver.

A grave, a stile, a dandelion clock

Then the cool silence of St. Enodoc

– Excerpt from ‘John Betjeman at Trebetherick’ by John Whitworth.

Walk among the sand dunes between Brea Hill and Daymer Bay and you’ll stumble upon the quaint church of St. Enodoc with it’s peculiarly crooked spire. It’s surrounded by the historic golf course that was established in 1890 and named after the church.

From the nearby village of  Rock, depending on whether you go directly through the golf course, or take the slightly longer but more scenic South West Coast path along the Camel Estuary it’s a 30 or 40-minute walk. Once on the golf course, the church is well signposted. You actually have to skirt the 10th Golf Hole to reach the Church! Dogs are allowed on Daymer Bay throughout the year, but, must be on leads whilst walking on the golf course. 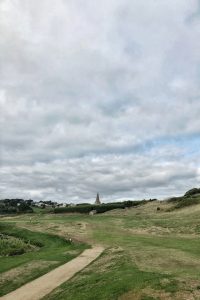 Unfortunately, very little is known about the early history of the church or even the Saint – him or herself. Yes, even the gender of Enedoc is in question! Also known as Wenedoc, Guinedoc or Enodoch, like most  Saints in Cornwall, is believed to have been of Welsh origin. The Catholic online magazine states that some historians believe that she was a woman known as Qendydd.

The Building of St. Enedoc

It’s widely believed that there has been a church on or near the site long before the present building. Scant remains of a small chapel were revealed during a severe gale in 1822 near Brea Hill but were lost again under the constantly shifting sand dunes.

Despite being small in size St. Enedoc has evolved over many centuries dating from the 12th century. The font is from this period and has subsequently been mounted onto a modern granite base. The curved broach spire (a term describing a square base upon which a  tapering octagonal spire is constructed) is the 13th Century; just one of many additions. 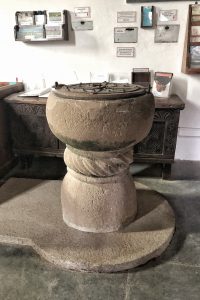 St. Enodoc and the Shifting Sands of Time

By the 1850’s the only way to enter the church was by being lowered down through a skylight in the north transept roof. This was carried out on an annual basis by the local vicar who blessed the church so it remained consecrated.

The church was ‘excavated’ and restored in 1864 by J P St Aubyn. Like many Victorian architects at this time his restoration work is, nowadays, not considered particularly sympathetic to the buildings involved. This was not just happening in Britain. Viollet-le-Duc was ‘renovating’ buildings across France in the same high Gothic style – think Norte Dame and Carcassonne. The resulting church is charming but far removed from its historical roots. 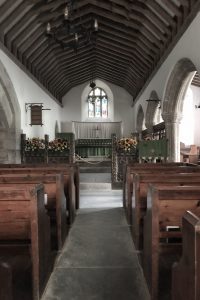 Sir John Betjeman (1906-1984), Poet Laureate from 1972 until his death, used to spend his childhood holidays at his father’s property in Trebetherick. This started a lifelong love affair with Cornwall, particularly the Camel Estuary and resulted in a house purchased in 1959 overlooking the 12th hole, ‘Treen’ in Daymer Lane. He was to end his days here and is now buried in St Enedoc Church, which he immortalised in the poem ‘Sunday Afternoon Service in St. Enodoc Church, Cornwall’. 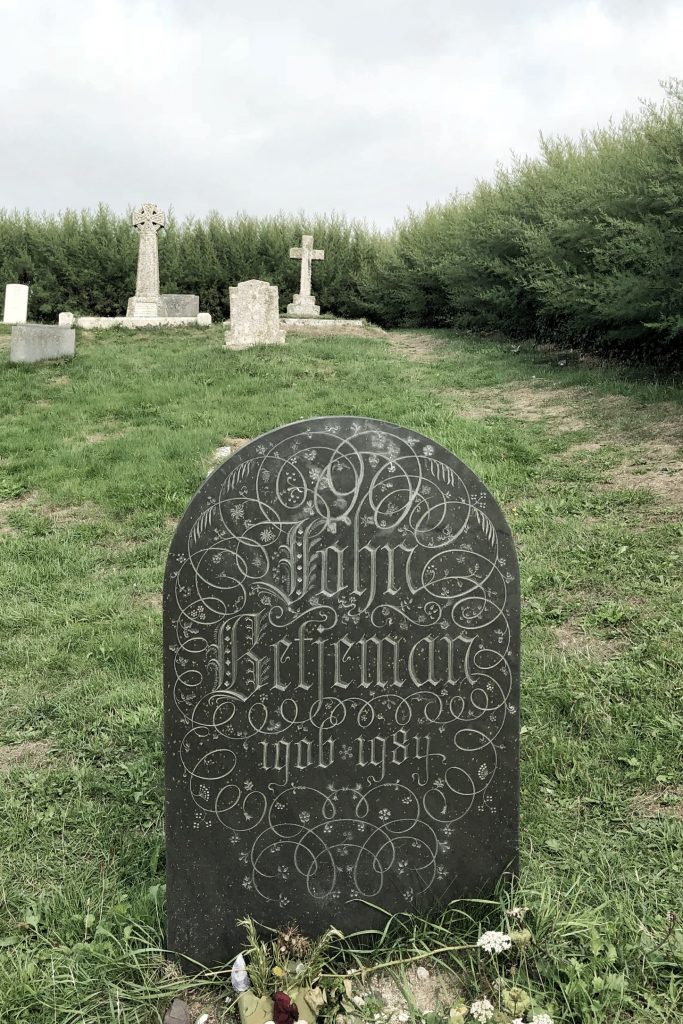 Things to do nearby

The North of Cornwall has no shortage of incredible things to see and do. So whether you enjoy long coastal walks, scouting out filming locations from your favourite series, or simply wish to enjoy the sound of the waves crashing on to the beach, here are some of the best things to do near the church of St Enodoc.

Port Isaac – A picturesque fishing village that is the location of the popular ITV series ‘Doc Martin’. Parts of the village date back to the Middle Ages. If you wish to see one of Cornwall’s more unusual places to stay (Doyden Castle), then it’s worth walking

Polzeath – A  large sandy beach that is very popular with holiday-makers and a surfer’s paradise!

Daymer Bay –  At low tide an extensive sandy beach with rock pools. The beach is dog-friendly all year and is a beautiful place to spend an afternoon.

Padstow – A quintessential Cornish fishing port which is best visited in the spring or autumn as this quaint town can be exceedingly busy in high season (and as such, pretty hard to wander around). 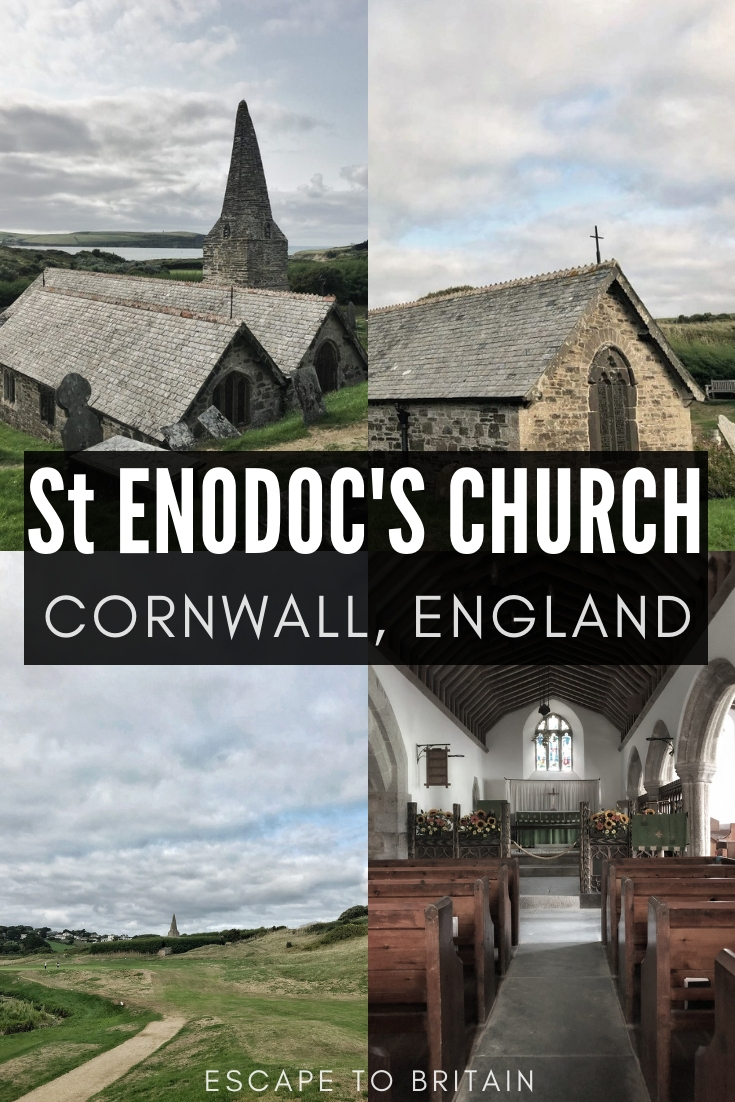 148 shares
escapetobritain.com is a participant in the Amazon Services LLC Associates Program, an affiliate advertising program designed to provide a means for sites to earn advertising fees by advertising and linking to Amazon.com. As an Amazon Associate I earn from qualifying purchases.