Towering above crashing white waves old engine houses cling precariously to rugged cliffs; the vestiges of a tin mining industry that once dominated the Cornish landscape. Botallack and Levant are found in the St Just District and are part of the Cornish Mining World Heritage Site.

Editor’s note: If you’re a true Poldark fan but don’t have easy access to a car or ample time to plan out a route for the best of Poldark filming locations for yourself, then you may well want to consider booking this Launceston / St Austell or Truro Poldark Tour. Taking place over the course of a day, you’ll soon be spying some of the most iconic Poldark filming locations across the South West England county. See the full details here. 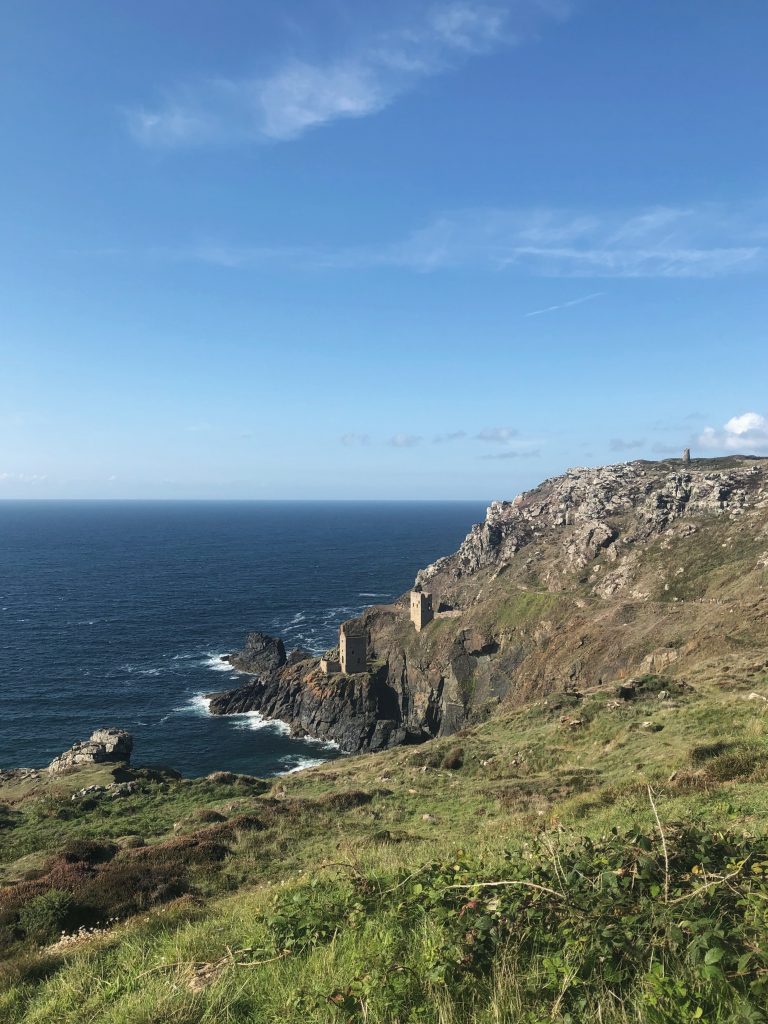 About the St Just Mining District

Found in the furthermost southwestern corner of England, just a stone’s throw from Land’s End itself, the St. Just Mining District is made up of numerous small mining settlements, disused mineshafts and ruined engine houses. The Tin Coast, as it’s affectionately become known, stretches roughly seven miles from Pendeen to Cape Cornwall along the Atlantic Ocean. 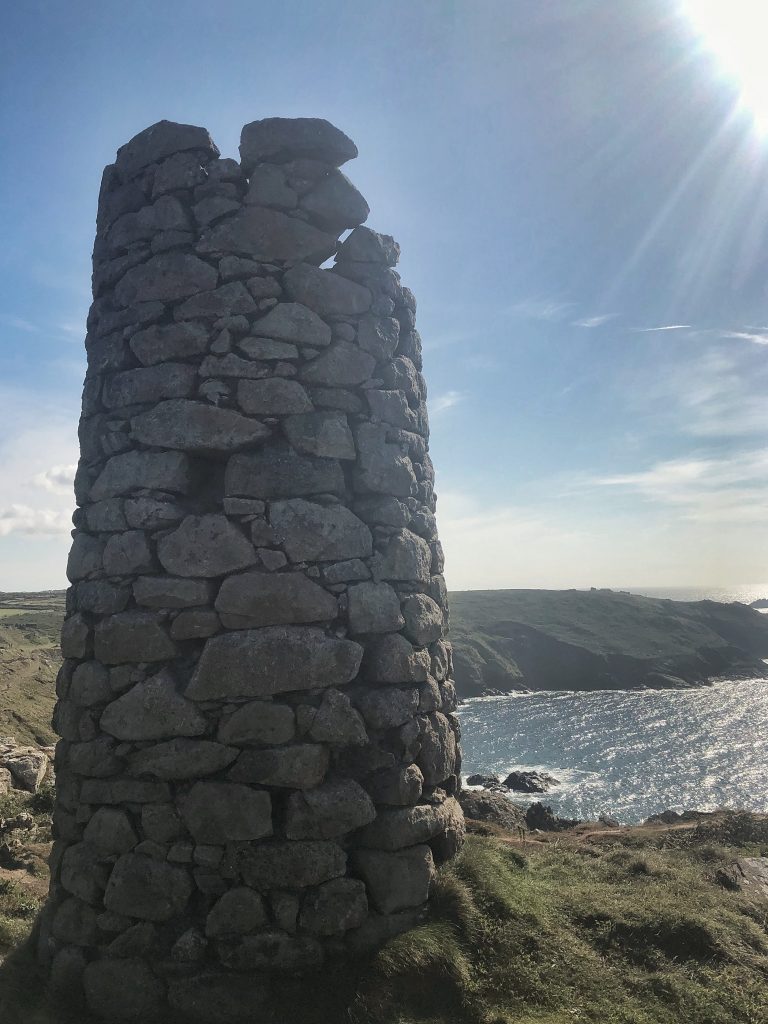 Set amidst breathtaking open moorland with rugged cliffs and steep precipices as a backdrop, it’s not hard to see why this area of the Cornish Mining World Heritage site, nowadays, attracts numerous visitors. However, it was a completely different story during the 1920s when a number of the mines were still operational.

In his book – The Cornish Coast and Moors (1928) – A. G. Folliott-Stokes writes that despite it’s striking location Levant Mine mars the coastline and is  ‘but a sorry substitute for the heath and golden gorse which their presence has destroyed.’

He continues: ‘…we climb the opposite hill, past mud and miners, arsenic fumes and tramlines…and unsightly refuse heaps of rock and clay.’ A very pleasant picture indeed! Arsenic was a lucrative by-product of the tin ore.

When you cast an eye over the scenery today it’s quite clear that this has been a mining site. However, thanks to the softening effects of nature and time itself, it’s hard to imagine just how industrialised and scarred this area must have been. 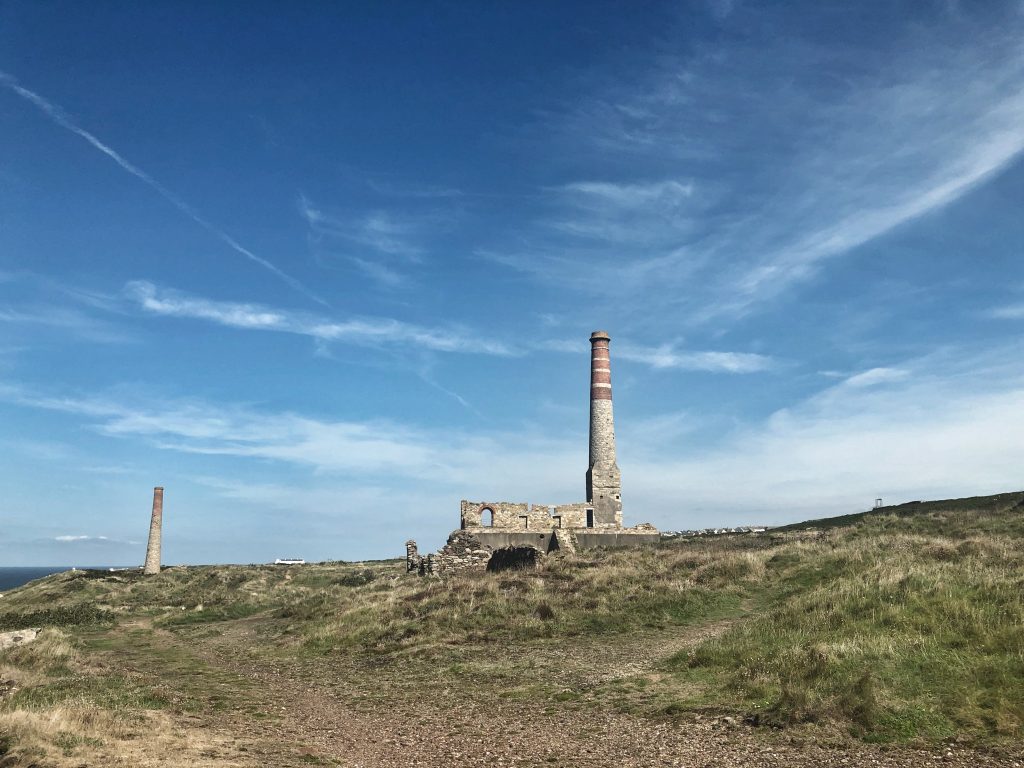 There’s been some form of mining in the St. Just area for the last couple of millennia; it’s, in fact, one of the most ancient mining areas in Cornwall.  Early miners would have collected tin from alluvial deposits found in the local river beds. It’s not known exactly when these surface supplies were exhausted, but, there is historical evidence of underground mining dating back to the 16th century, specifically Botallack Mine.

With the advent of the industrial revolution, and the invention of the steam engine, came the knowledge and capacity to mine on a much greater scale; and as the world became more industrialised the demand for tin and copper increased. Cornish mining was in its heyday during the 19th century and there were over one hundred engine houses in the St Just District alone! 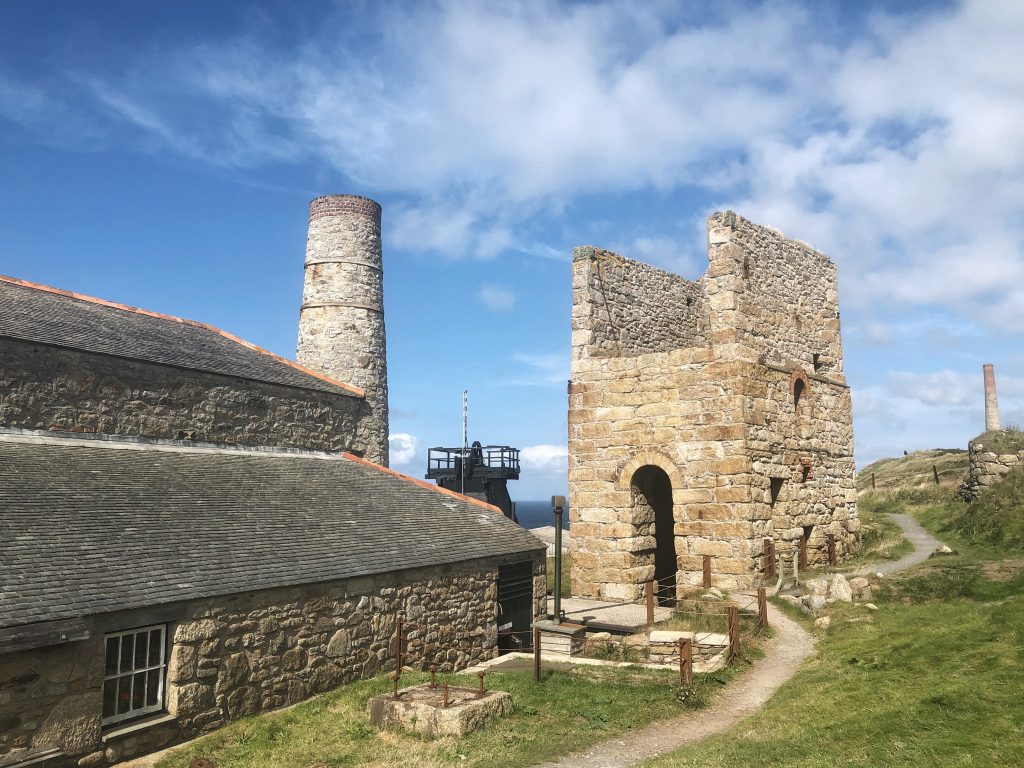 Levant Mine was first documented on a map in 1748, but, it wasn’t until 1820 that the Levant Mining Company was founded. By 1836 it had become a large business and employed 320 men, 44 women and a staggering 186 children; one of Cornwall’s most famous and lucrative coastal mines.

In the St. Just area the tin and copper lodes run out under the seabed and so that is where the miners had to work. With the advancement of technology during the industrial revolution it became possible to build below the seabed and some of the mine workings extend for over a mile under the sea. 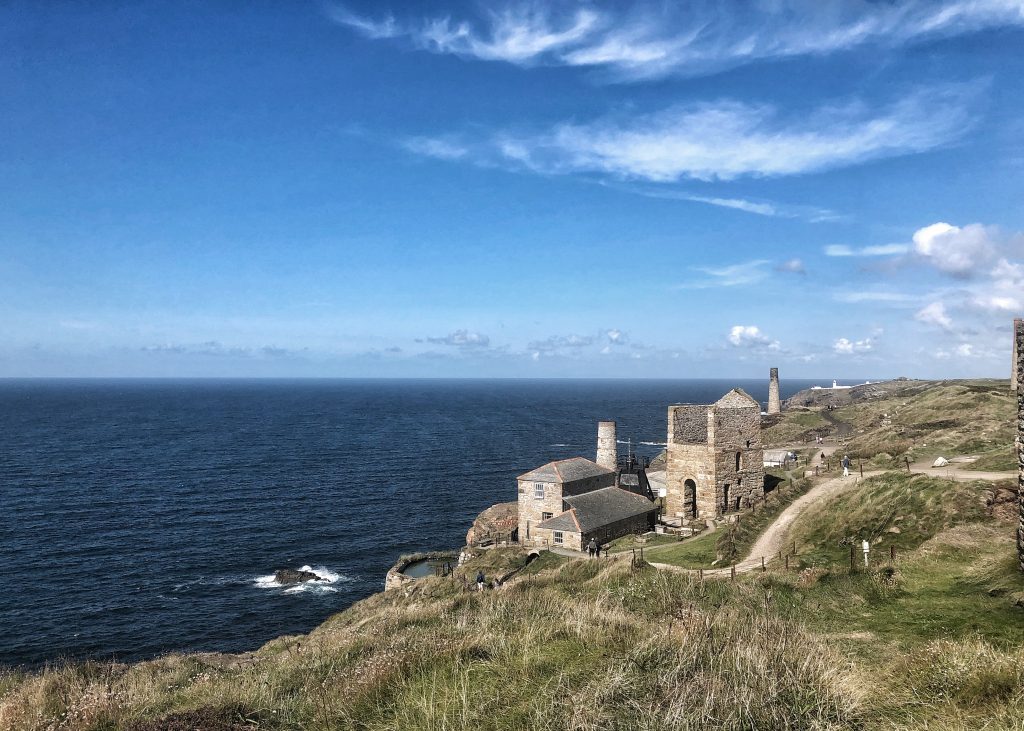 A Cornish Beam engine is a type of steam engine, as the name indicates, developed in Cornwall. The technology was used across the world to create power for various industries.

The engine at Levant, installed in the 1840’s, was in continuous use until the mine’s closure in 1930. The energy it created was used for pumping excess water out of the mine (but, this was not a major problem at Levant), winching materials, including the ore, in and out of the mine and powering the ore-stamps. It also powered the man engine until 1893 when a compound tandem engine was installed specifically for that task. 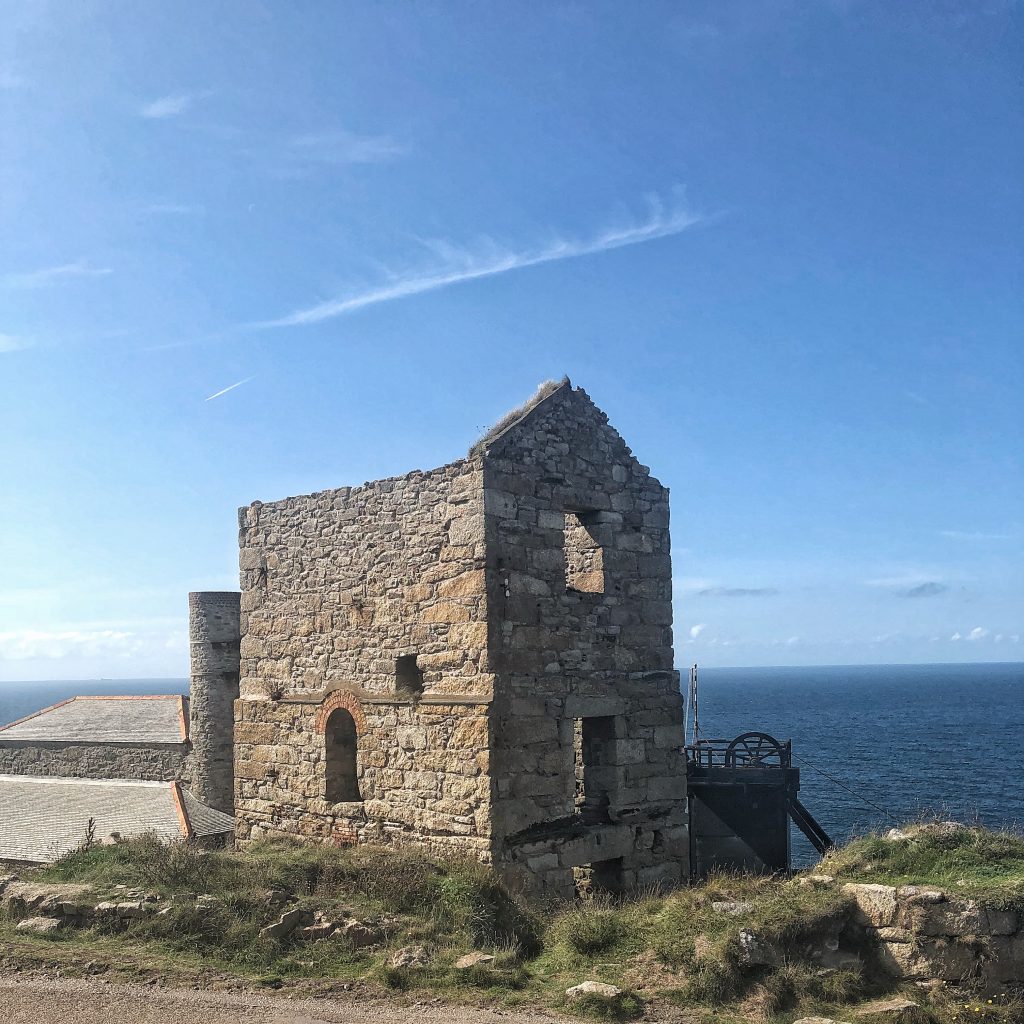 On the 20th October 1919, the worst tragedy ever recorded in Cornish mining history occurred at Levant when the Man-engine broke. It was the only remaining Man-engine in use in the county at the time of the accident and had initially been installed in 1857 and at a later date was sunk to a depth of 266 fathoms (1596 feet).

Moving at only 60ft/minute it took the men over 25 minutes to either ascend or descend the mineshaft via a series of planks fixed to a moving rod. The accident, due to the metal rod breaking, occurred at around 3.00pm when the Man-engine was almost fully loaded with men ascending. Thirty-one miners were killed and nineteen injured.

Levant reopened after the tragedy but, the economic climate had changed and by 1930 the mine was closed down.

Just a short walk from Levant along Roscommon cliff and you’ll reach the historic Botallack Mine complex; which in the 16th century was being worked by the Company of Mines Royal. It’s known that there were two mines in operation at this time and they were probably in the locations that are now known as Wheal Cock and Wheal Hazard. The above picture depicts Wheal Hazard and Wheal Crowns.

Like neighbouring Levant the mine shafts at Botallack extend under the seabed, a distance of about half a mile. By 1895 the Botallack mines were closed due to falling tin and copper prices making the business not economically viable. 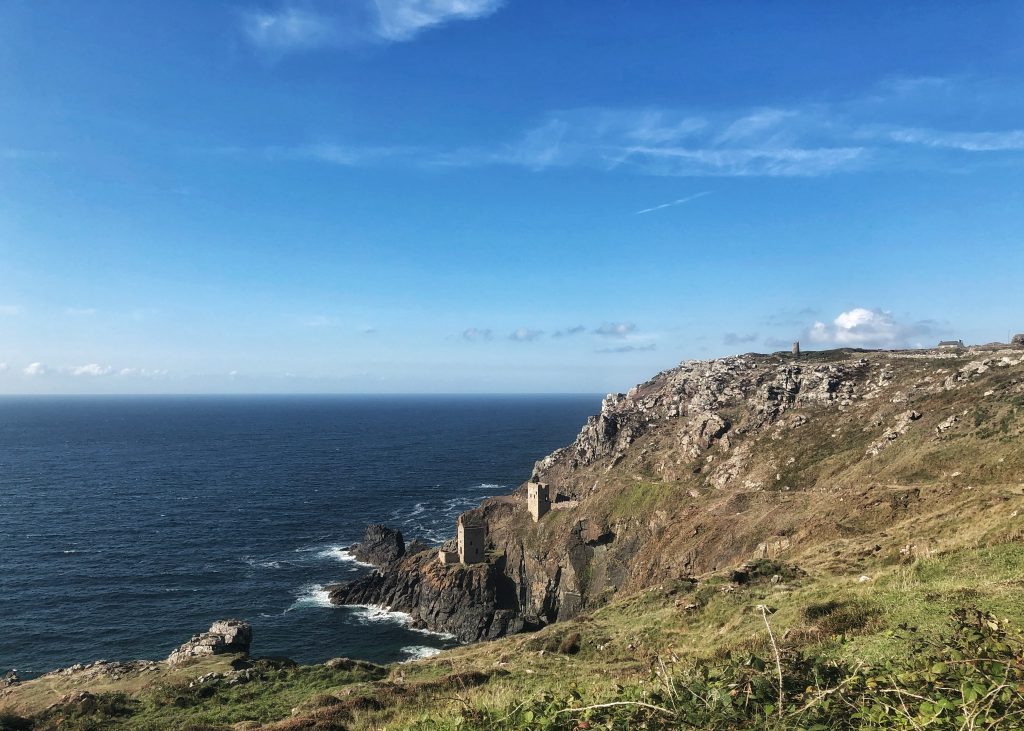 The BBC’s adaptation of Winston Graham’s Poldark novels, starring Aidan Turner as Ross Poldark, has used many Cornish filming locations – Botallack Mine being one of them.

The fictional mines in Poldark – Grambler is depicted by Wheal Crowns, which is the engine house clinging precariously to the cliffs in the upper photo and Wheal Leisure which is Botallack’s own Wheal Owles – photo above. The ruined engine houses have been cleverly reconstructed for the TV series using CGI. 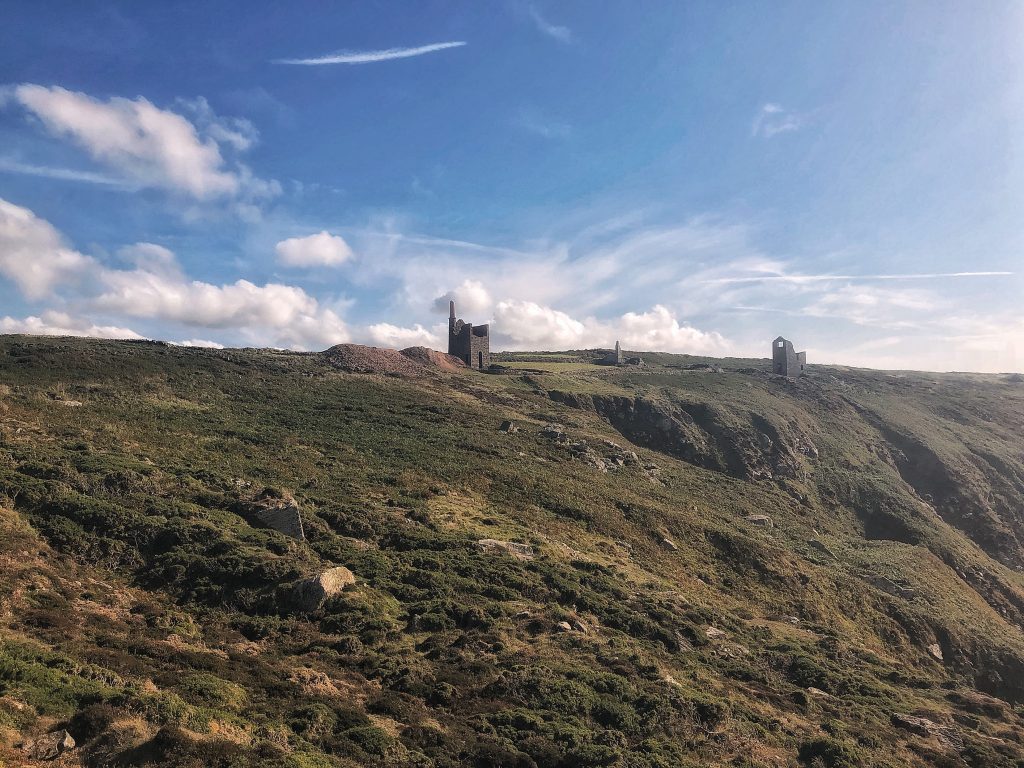 Cape Cornwall – Attractive headland just four miles from Land’s End that until a couple of centuries ago was thought to be the most westerly point in England. Unlike it’s famous neighbour the area is not spoilt by tourism and is sometimes known as The Connoisseur’s Land’s End.

Geevor Tin Mine – Operational from 1911-1990, it was the last tin mine to be closed in  Cornwall and is now an interactive museum.

Minack Theatre – A unique theatre carved into the granite cliffs with magnificent views over Porthcurno Beach and the Atlantic Ocean.

Porthcurno Beach – A beautiful sandy beach owned and maintained by the National Trust.

St Levan’s Church, well and chapel – A small attractive church of Norman origin. A short walk away overlooking Porthchapel beach are the remains of the well and the chapel (believed to date back 1500 years). 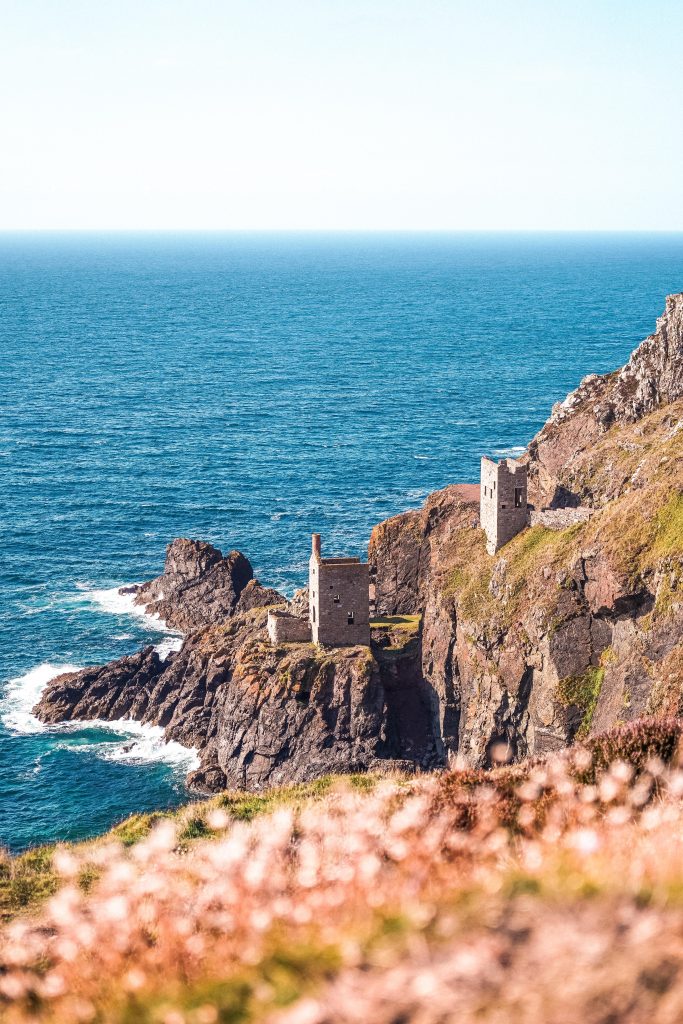 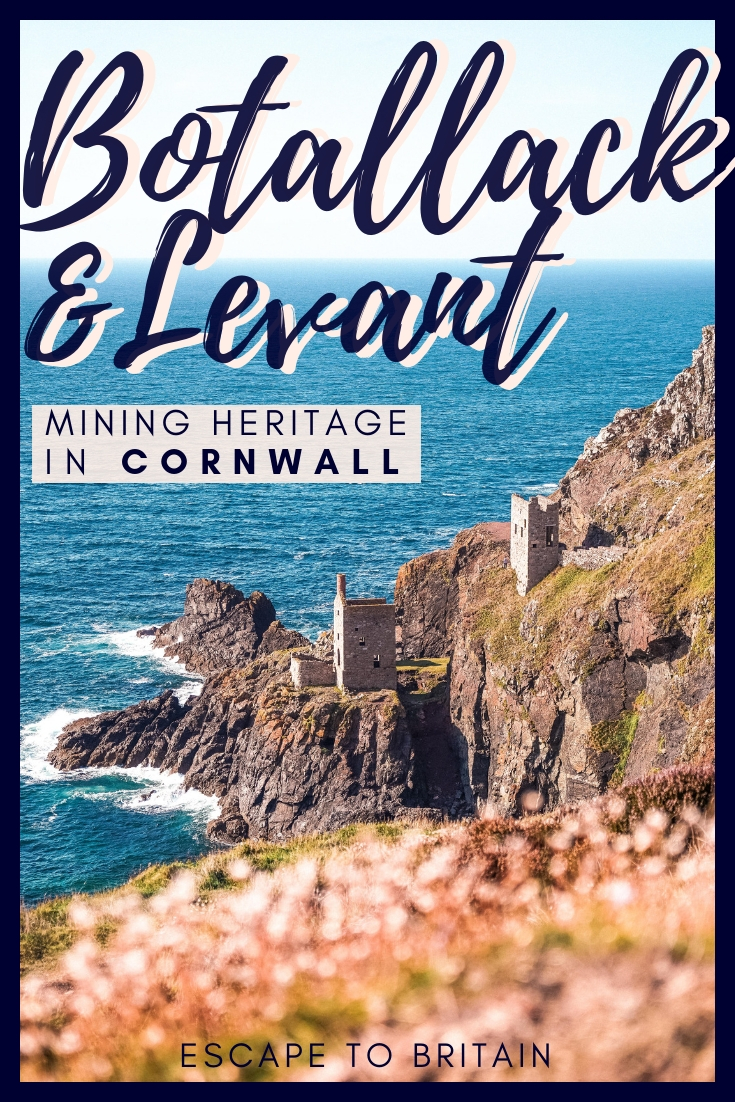 Stourhead Gardens: An 18th-Century English Garden in Wiltshire
7 Reasons You Must Visit the Cotswolds On Your Next England Trip!

86 shares
escapetobritain.com is a participant in the Amazon Services LLC Associates Program, an affiliate advertising program designed to provide a means for sites to earn advertising fees by advertising and linking to Amazon.com. As an Amazon Associate I earn from qualifying purchases.