Situated on the northeastern edge of Dartmoor is the attractive ancient stannary town of Chagford. Steeped in history, with small independent shops, numerous places to eat and plenty of accommodation, Chagford is the perfect place to spend a mini-break and discover the wider Devon region. 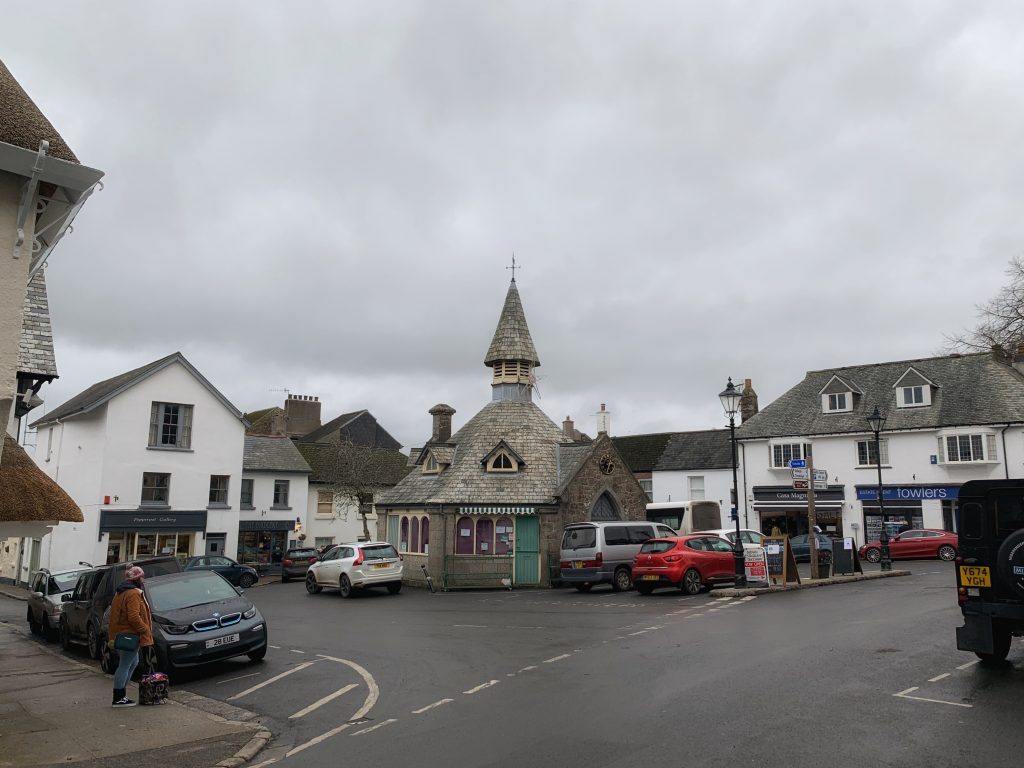 A brief history of the Stannary Town of Chagford

The surrounding area has been inhabited for over 4000 years, but, it was in the Middle Ages that Chagford became an important and prosperous town. The wool industry had a great impact in the area but not so much as the large-scale tin mining operations that took place on the moor.

In 1305, Edward I created the Stannary Charter and Chagford became one of four Stannery Towns that had a monopoly on all tin mined in Devon. The tinners had to take their goods to one of these towns to be weighed, quality assessed, stamped and then a duty levied on it that was payable to the Crown. 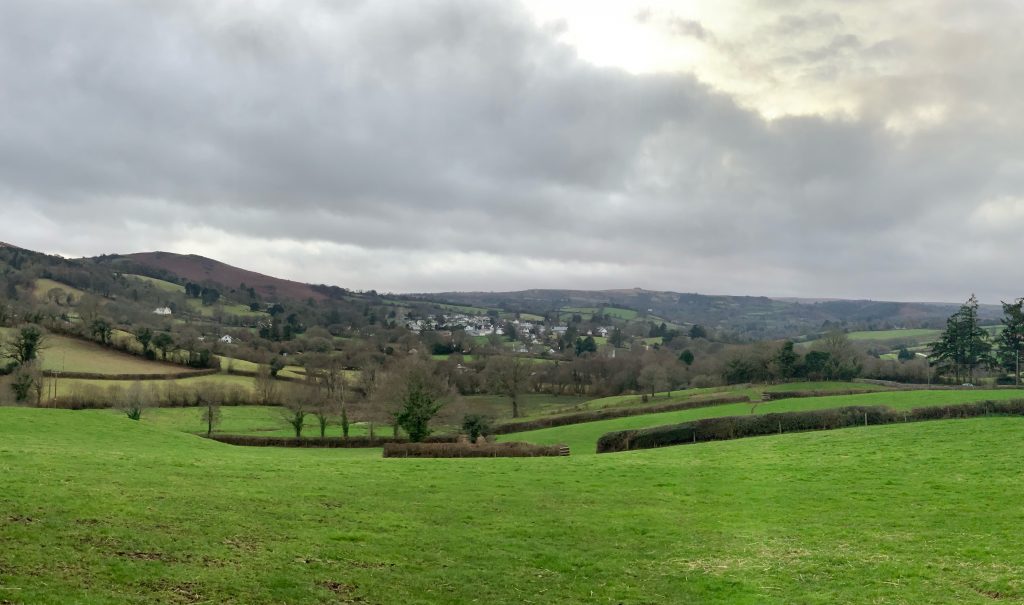 Over the next couple of centuries, Tin Mining in Devon was a great source of revenue for the Crown. The status of stannary town meant that Chagford, along with Ashburton, Tavistock and Plympton became the administrative centres of the region and were allowed to create their own Parliament which took precedence over Common Law.

Stannary is derived from the Medieval Latin word Stannaria meaning tin mine. 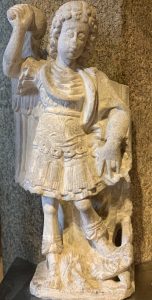 The Church of St Michael the Archangel that can be seen today was built at the beginning of the 15th century and reflects the prosperity of the town due to its status as a Stannary Town. 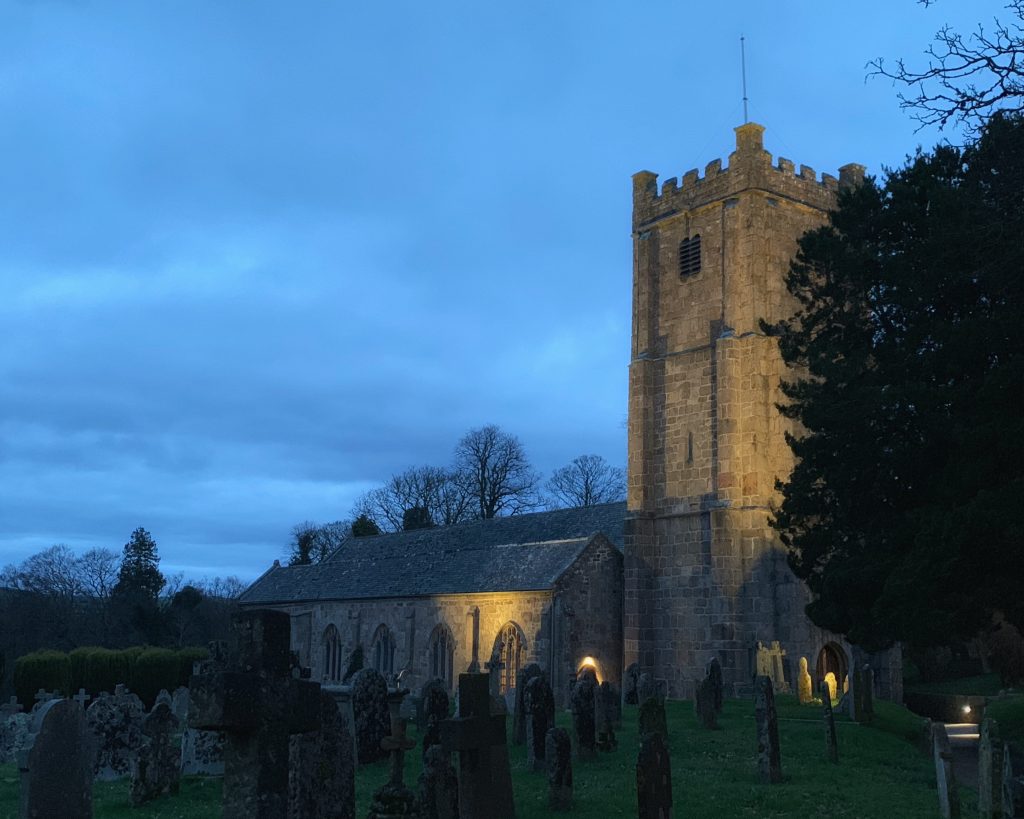 The 15th century church of St. Michael replaced the earlier building that Bishop Branscombe had dedicated in 1261 and there was probably a place of worship on the site many centuries prior to this. In fact, in the churchyard there’s a tomb which is either Norman or Saxon and a Norman font top thought to date to c.1160AD was discovered buried in the church during 19th-century alterations. 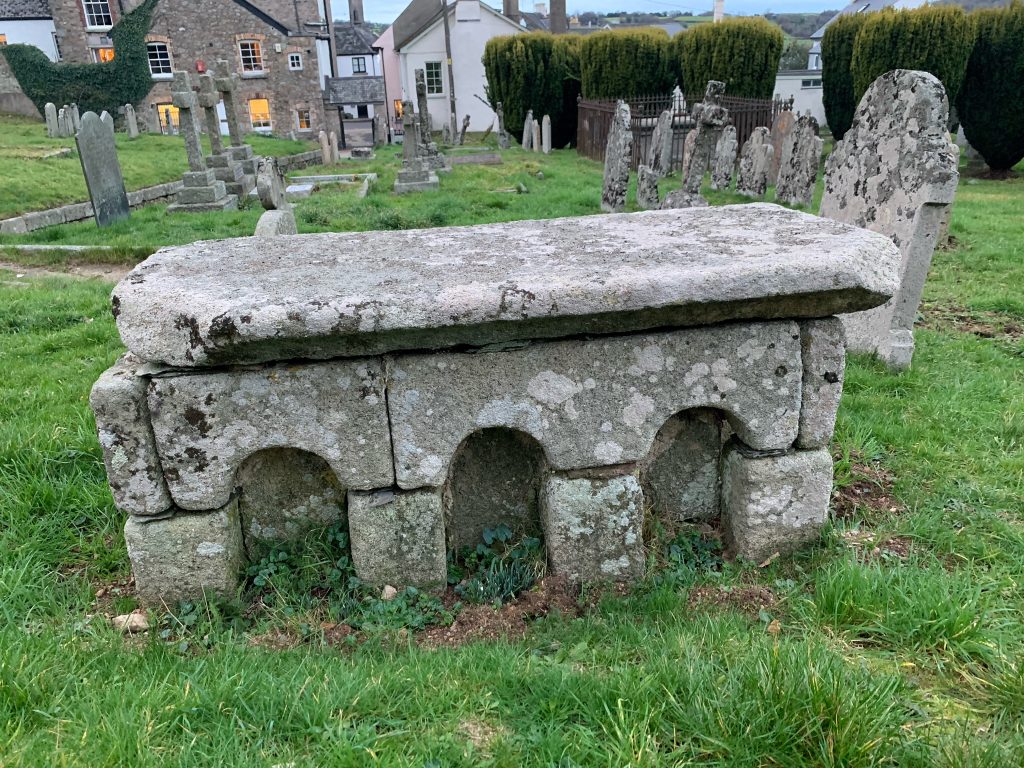 As with the majority of religious buildings the sumptuous Medieval interior was largely destroyed during the Reformation and it wasn’t until the mid 19th century onwards that vivid colours and intricate carvings were reintroduced. 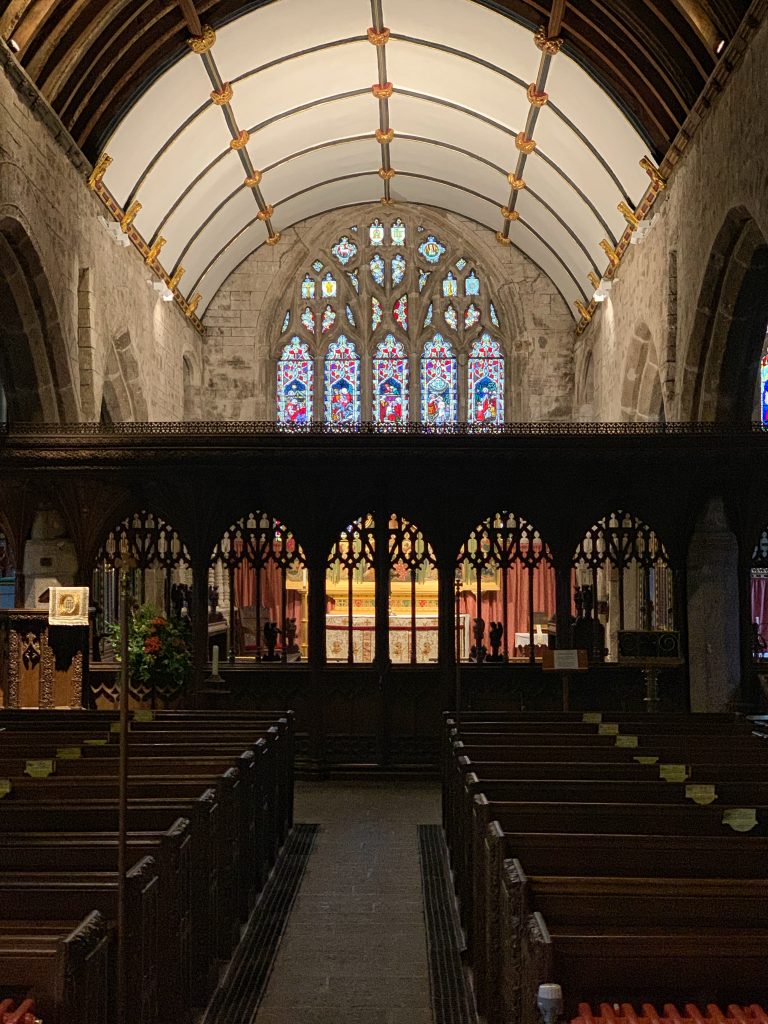 Beautifully carved with ornate tracery the early 15th-century window in the Sanctuary now contains stunning jewel-like colours of stained glass depicting ten scenes of ‘Our Lord’s Life’ attributed to J L Pearson in 1888. Pearson also created the Reredos in a quattrocento style depicting the Ascension and Saints harking back to the pre-Reformation era. 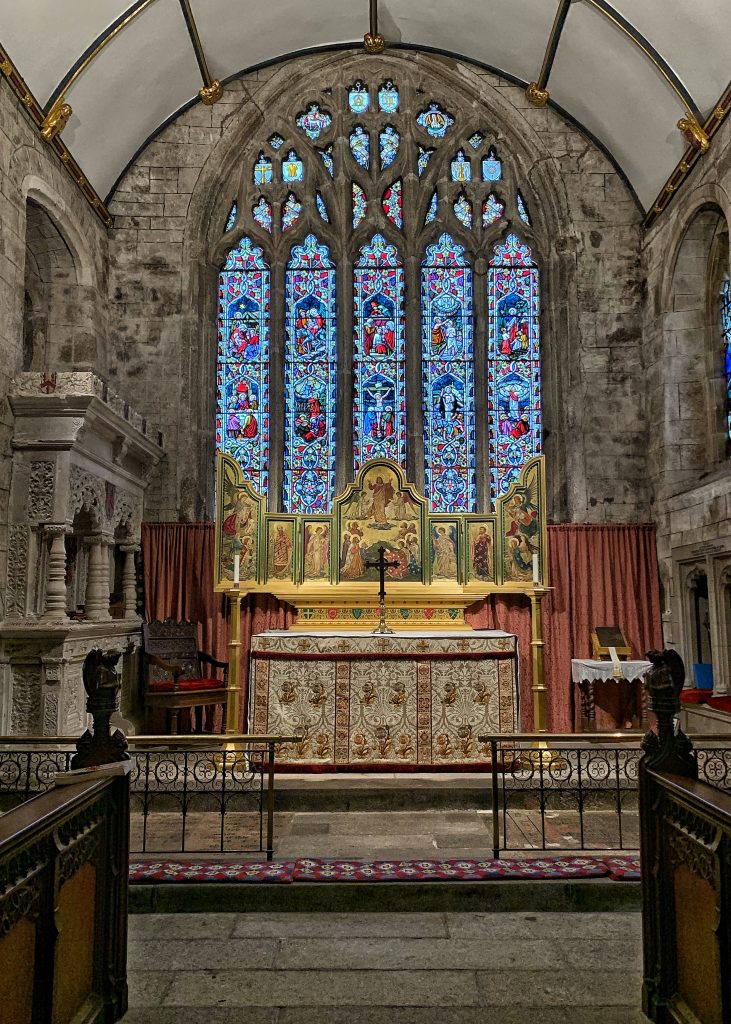 The rood screen, as well as the pulpit and pews, were designed by the well known Exeter-based craftsman Herbert Read in the 1920s. 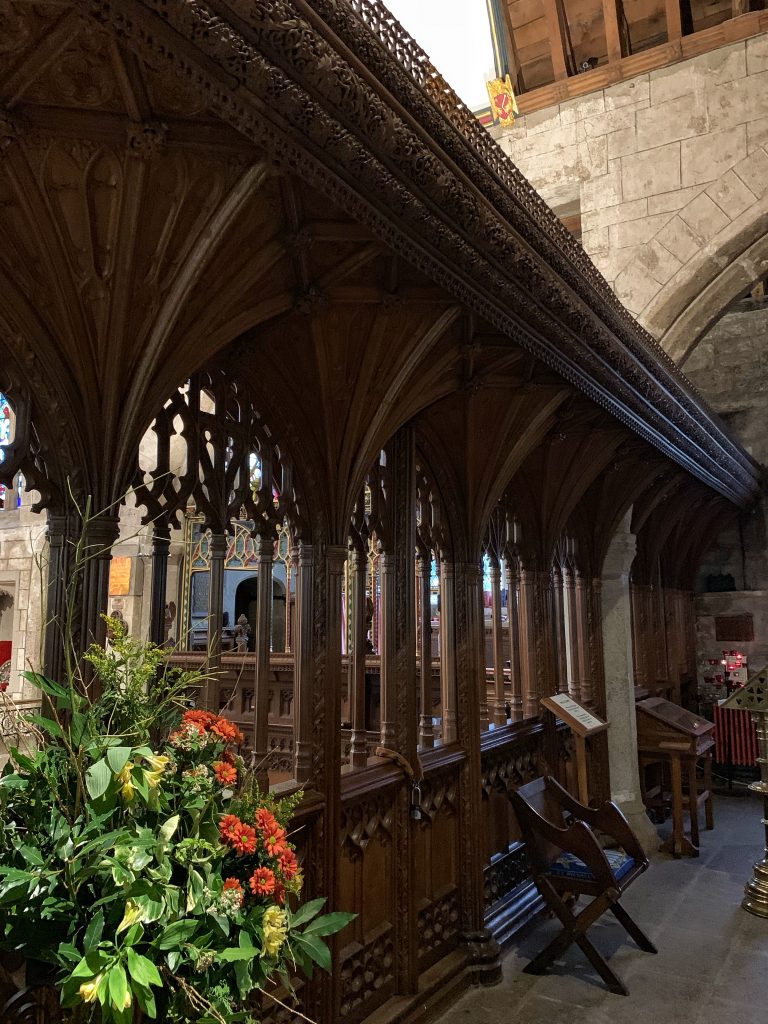 Chagford has its fair quota of folklore, legends and tragic tales. Perhaps the most famous of all these stories is the demise of Mary Whyddon, great-granddaughter of Sir John Whyddon, whose violent death is thought to be the inspiration behind R D Blackmore’s novel – Lorna Doone. (It must be noted that Blackmore’s heroine, unlike Mary, does in fact survive.)

Mary’s buried in the chancel of St. Michael’s church and her epitaph is carved into a stone set in the floor:

Behold a Matron yet a maid

A modest look a pious heart

A Mary for the better part

But drie thine eyes why wilt thou weep

Such damsels doe not die but sleepe

It’s believed that poor Mary was shot by a jealous suitor in a violent crime of passion either as she descended the steps of the church having just tied the knot or over at the Whiddon property just over the road, which is now called The Three Crowns

Standing just opposite the church is the mid-16th century Grade II* listed property that is now the Three Crowns Inn.

This was probably constructed as a townhouse for Sir John Whiddon (Whyddon) a judge and member of one of Chagford’s principle tin-mining families and formed a part of the Whiddon Park Estate. The building incorporated elements of a medieval townhouse that was already in situ. (Remains of this earlier property were discovered during groundworks to the south-east wing). 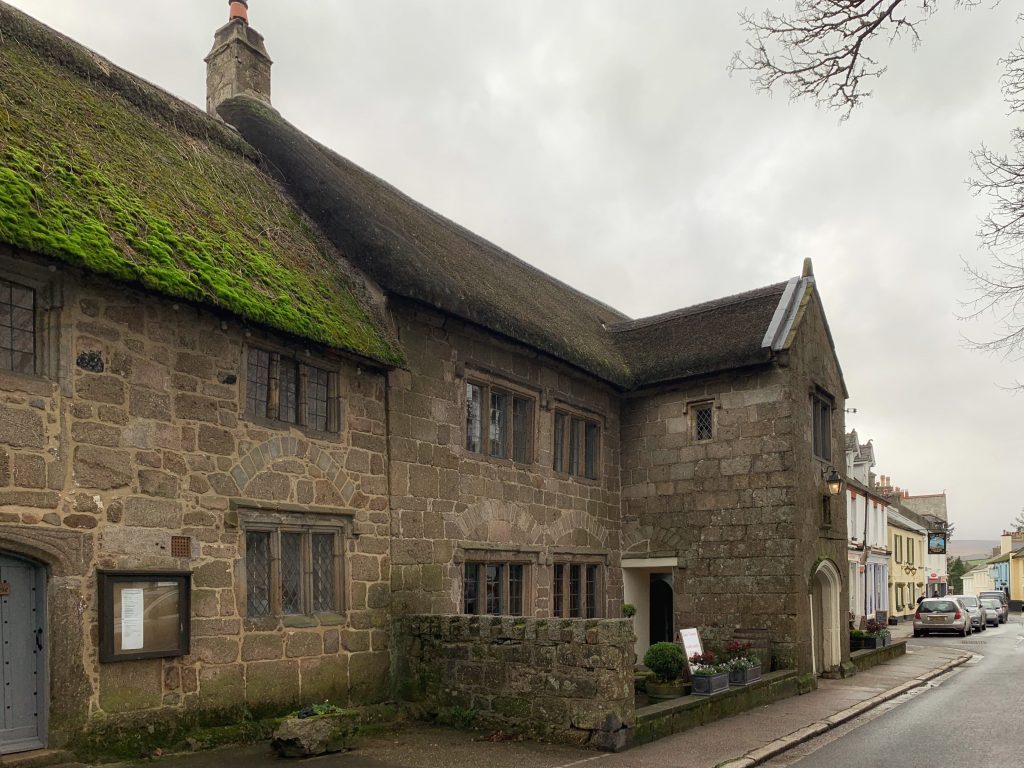 At a later date the property became the Dower House to the Whiddon Family and it was probably as such at the time of Mary’s murder in 1641.

It’s not known when the property first became a tavern, but, The Black Swan was definitely named in honour of the Whiddon family. For services to Queen Mary, Sir John Whyddon was given an addition to his coat of arms and this was a black swan, sitting in the crown with a golden bill. 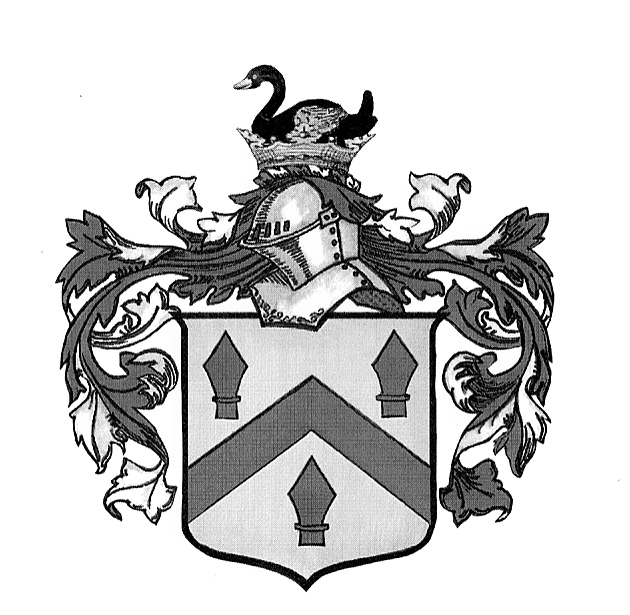 By the late 18th century the Inn had been renamed the Three Crowns.

Sidney Godolphin (1610-1643) was an English poet, courtier and MP for Helston being one of the last royalist members to leave the Long Parliament before the outbreak of the Civil War.

In February 1643 Sir John Berkeley and a small group of Royalists attacked Parliamentarian soldiers who were stationed at Chagford. In the ensuing skirmish Sidney Godolphin was mortally wounded by a musket shot and died most probably in the porch of the property that is now the Three Crowns. 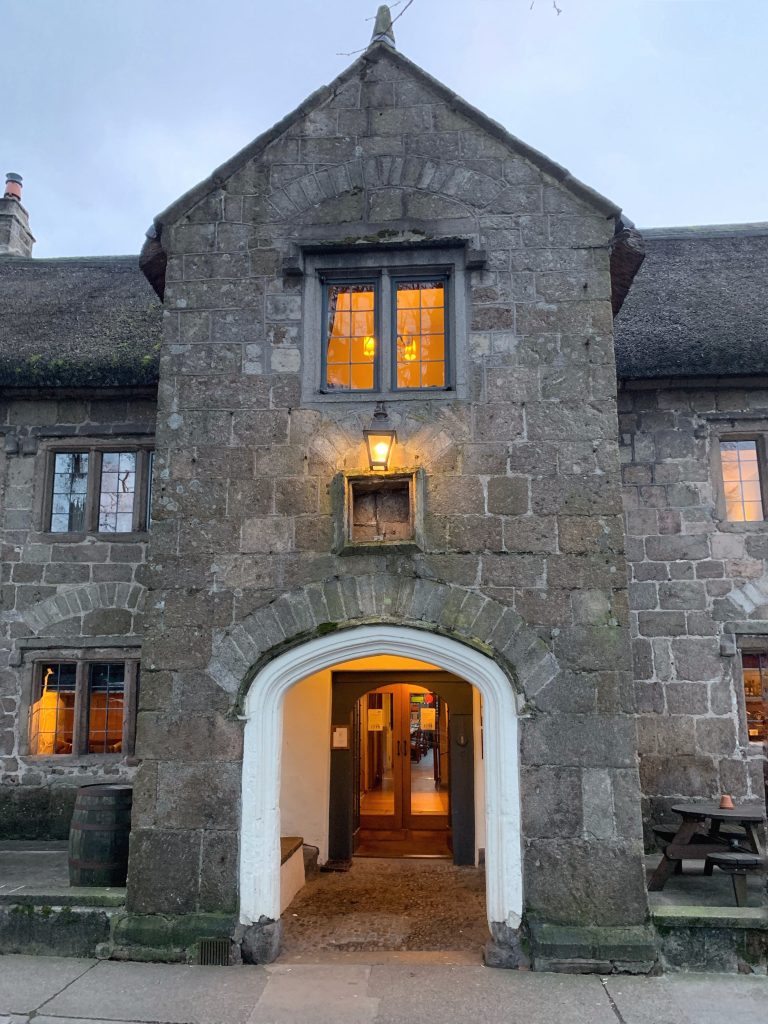 It’s said that his ghost makes fleeting appearances around the hotel in full Cavalier dress.

Tourism comes to Chagford with the Victorians

Unlike those in Cornwall the Devon mines became far less productive the deeper they were worked and so became uneconomical to run. By the mid-18th century Chagford was no longer the prosperous town it had been due to the decline of tin-mining on Dartmoor.

However, the advent of the railways in the mid-19th century was to have a massive economic impact on moorland villages and towns. Tourism during the summer months became big business and quaint attractive towns such as Chagford were able to profit from this upturn and continue to benefit to this day. 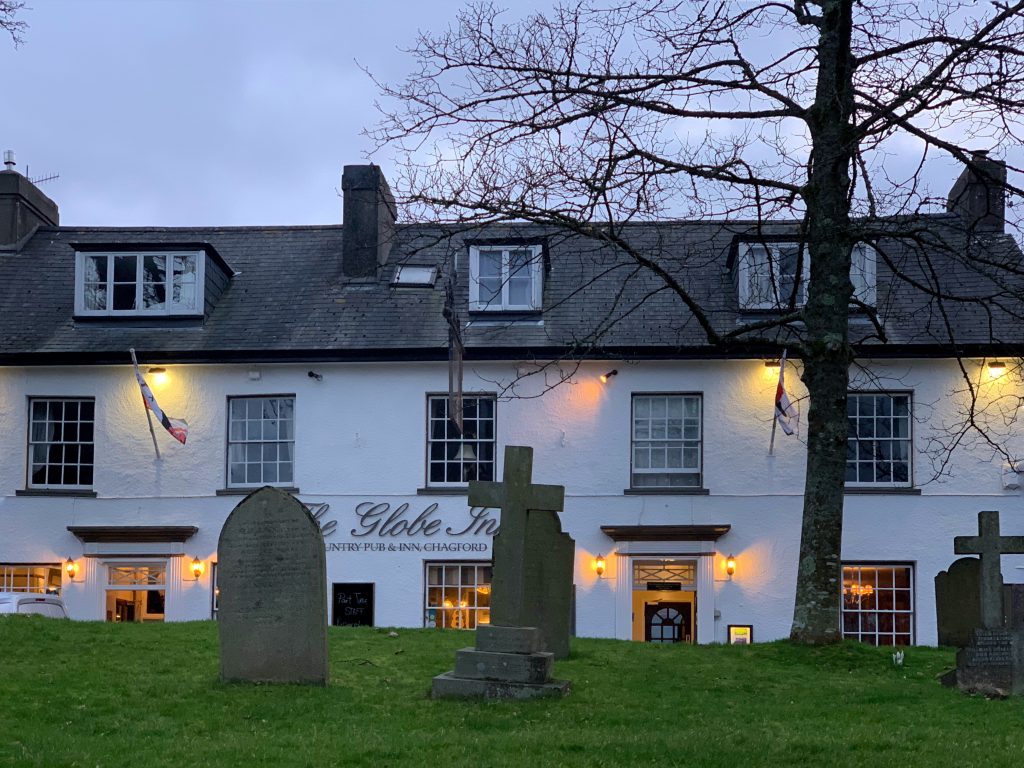 In Murray’s Handbook of Devon (1879) he states that in the summer an ‘omnibus’, which was a horse-drawn bus, ran three times daily from Chagford to the railway station at Moretonhampstead; and goes on to describe the town as such:

“The place is recommended by physicians for its pure and bracing air, and the lovely scenery in the neighbourhood may well do to its part toward the restoration of the invalid.” 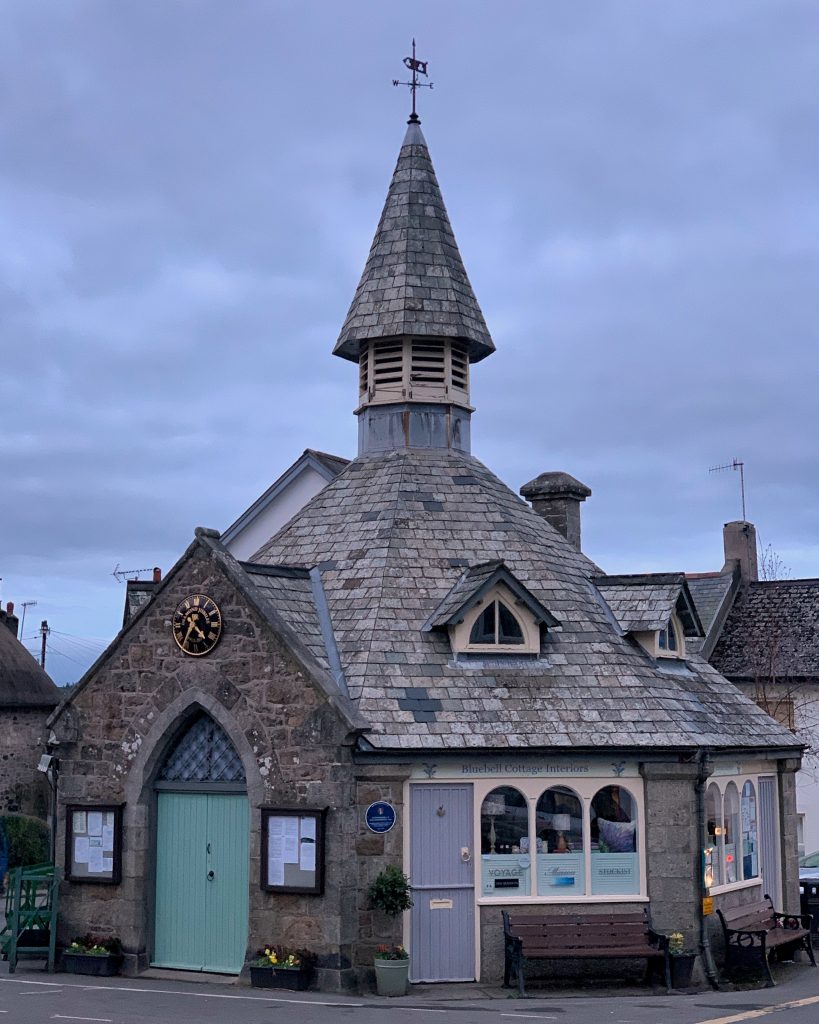 The town, as today, had numerous places for the visitor to stay to suit every budget from small lodgings to grand hotels.

With the burgeoning tourist industry it was inevitable that wealthy visitors required someone with extensive local knowledge of the area to guide them safely to the many antiquities and beauty spots on the remotest areas of the moor; James Perrott was that person and became famous in his own right.

“Light carriages are to be hired at Perrott’s in the principal street, and chaises at the inns. Perrott himself is well known as the ‘Dartmoor Guide’; and under his care or that of his sons (who are not less competent) the stranger who shrinks from solitary adventure may explore in safety the wildest recesses of their moor”.

Charles Dickens, Charles Kingsley and R.D. Blackmore are among the famous people of the day who engaged the services of Perrott.

In fact, R D Blackmore places Perrott in his novel Christowell: A Dartmoor Tale in the chapter entitled Cranmer. The passage begins:

“‘Tis a terrible rough road, sir” said the famous Mr. Perrott, of Chagford, not then so widely known as now, but already called ‘the Dartmoor guide’…

When writing about Perrott it would be wrong not to mention that he invented the concept of ‘letterboxing’, a phenomenon that’s spread across the globe, but, that’s another story!

Today, Chagford’s a bustling vibrant small town with a wealth of places to eat and stay – too many to mention in this article. 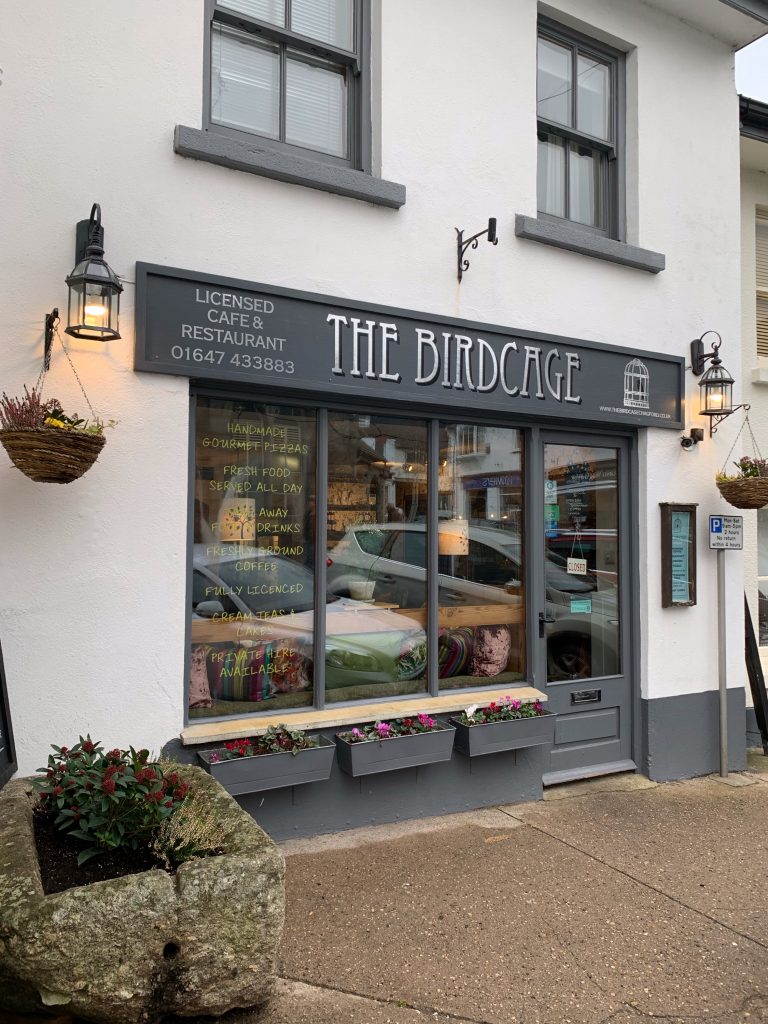 The Birdcage, right in the heart of the town, is a fantastic small cafe offering a wide assortment of freshly prepared produce for brunch, lunch or afternoon tea. 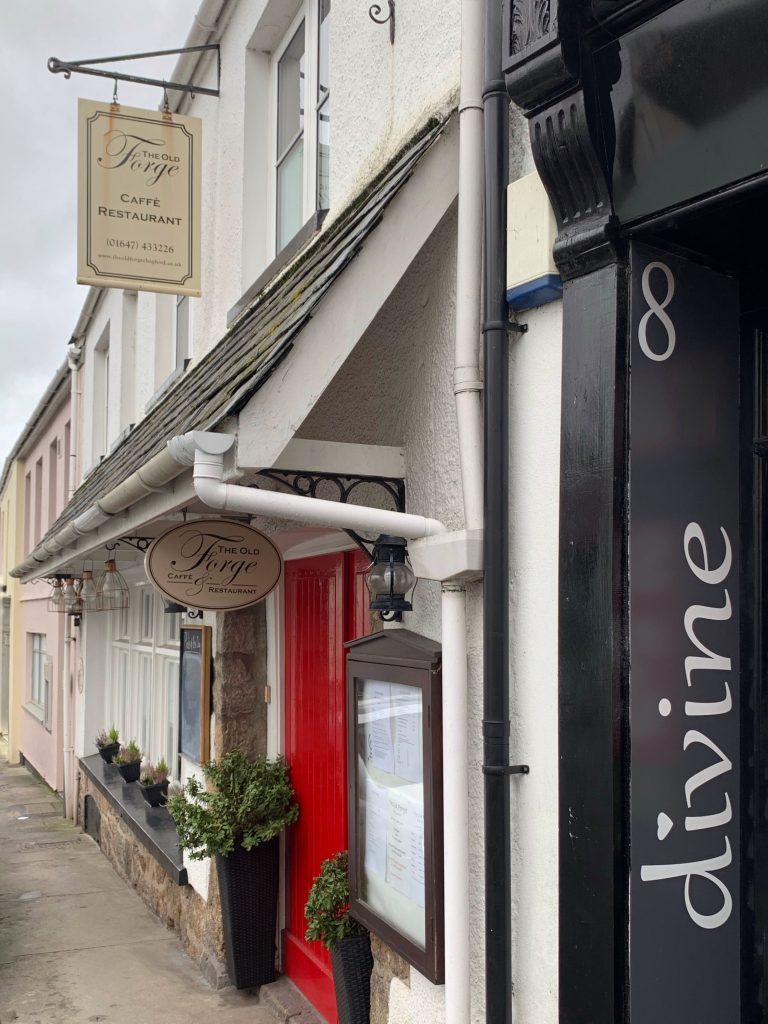 The Old Forge can be found just a stone’s throw from the town square and is the place to visit for a wide array of sweets and treats! 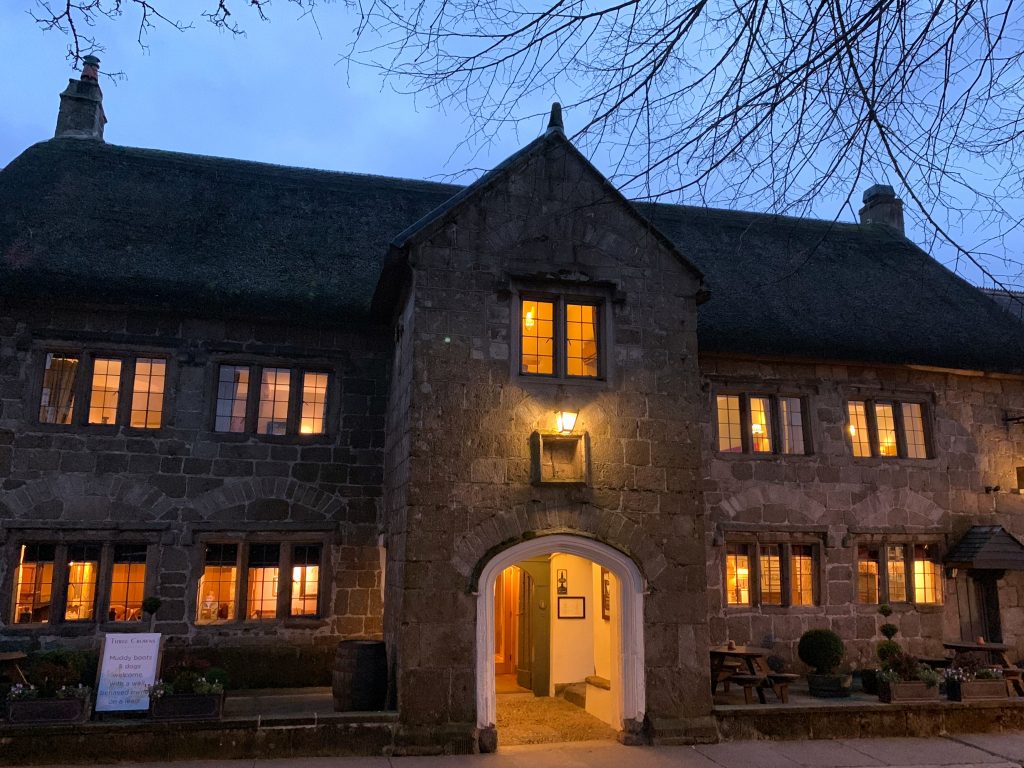 Yet another mention for the Three Crowns! It quite literally has to take the Crown as one of the best places to eat in Chagford and the accommodation is pretty great too. 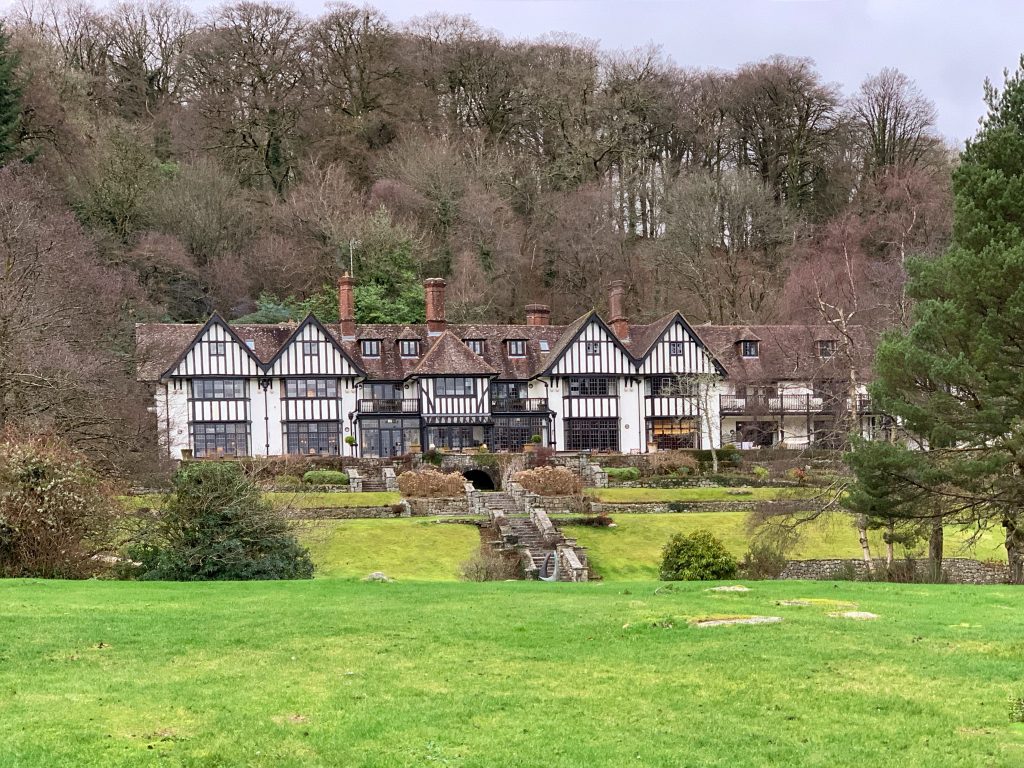 Less than two miles from Chagford is the 5* Gidleigh Park Hotel. Perched above the River Teign and set within its own extensive grounds of over a hundred acres; it’s famed for its Michelin-starred cuisine.

Places of Interest Nearby in Dartmoor National Park

Scorhill Stone Circle – is just a few miles away and is one of Devon’s largest and most intact Bronze Age circles. On the way there you’ll cross over the extremely narrow 16th/17th century Chagford Bridge over the River Teign. 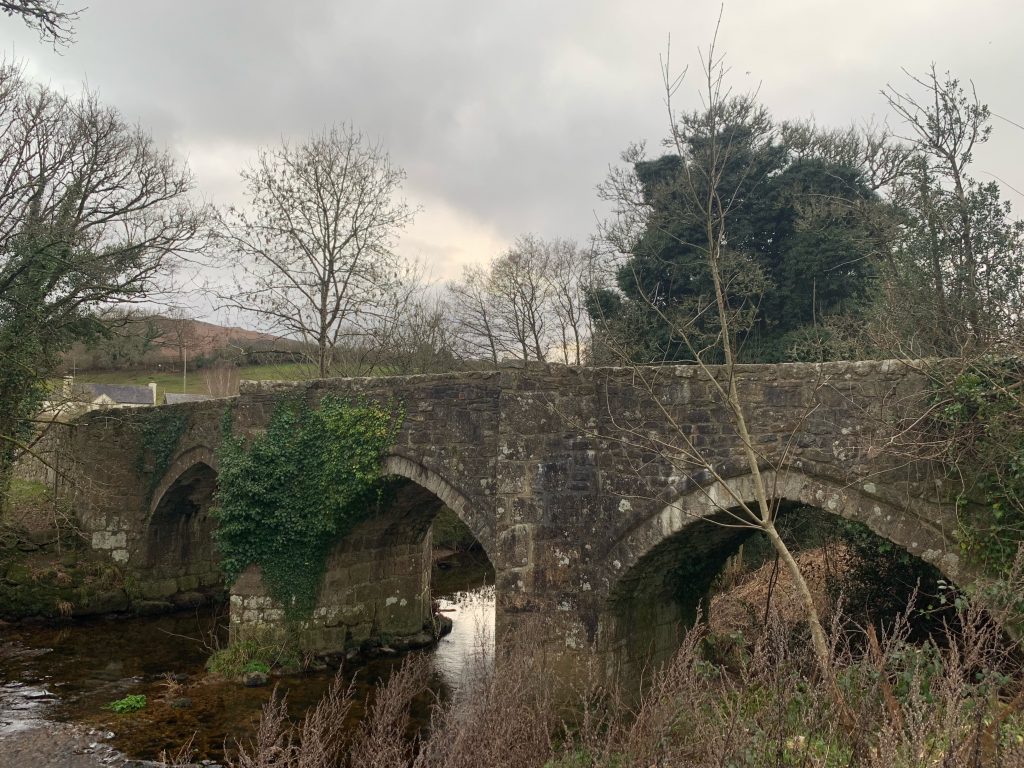 Castle Drogo – The last castle built in England in the first part of the 20th century for entrepreneur Julius Drewe and designed by Sir Edwin Lutyens. Owned by the National Trust.

Grimspound – An impressive Bronze Age settlement that is probably the most famous archaeological site on Dartmoor.

Enjoyed reading about the best things to do in Chagford? Pin it now, read it again later: 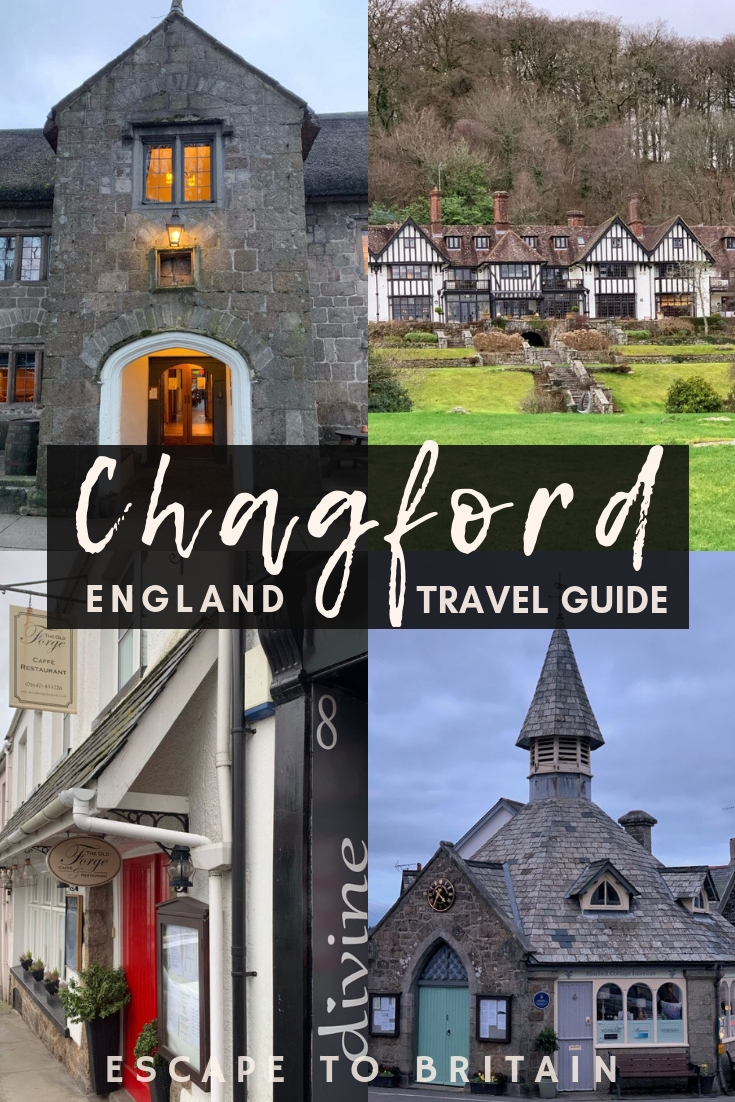 St Michael’s Mount Garden: A Tropical Paradise in Cornwall
Two Tors on the Edge of the Moors: Blackingstone Rock & Heltor

202 shares
escapetobritain.com is a participant in the Amazon Services LLC Associates Program, an affiliate advertising program designed to provide a means for sites to earn advertising fees by advertising and linking to Amazon.com. As an Amazon Associate I earn from qualifying purchases.