A gem of the north, Liverpool is an extraordinary UK city that’s bursting with history and culture. And while you certainly won’t be able to see everything this famous northern English city has to offer over the course of 24 hours, you can certainly enjoy its highlights. Here’s how to spend the perfect one day in Liverpool itinerary.

Home of the Beatles (possibly the world’s greatest ever band that inspired modern music as we now know it!), Liverpool is often overlooked by visitors to the UK. It can even be forgotten by Brits themselves, partially due to its proximity to more famous and larger Manchester.

But I’m here to show you that Liverpool is a city that’s well, well worth visiting – even if it’s just for a day! You can do a day trip to the northern city from plenty of UK destinations; so if you find yourself in this gorgeous city for 24 hours or less, here’s everything that you need to do to get a slice of Liverpudlian life.

Brunch in one of Liverpool’s best spots

Liverpool’s foodie scene isn’t as well known as Manchester’s or Birmingham’s, but it’s a real force to be reckoned with, particularly for brunch.

There are plenty of incredible breakfast and brunch spots dotted around the city centre, ideal for fuelling up before a day spent sightseeing. Here are three of the best:

Beatles Tour (or other Beatles attractions!)

You can’t go to Liverpool and not learn more about the Beatles. They’re synonymous with the city – and whether you’re a fan of their music or not, it’s well worth spending some time visiting some of the most well-known destinations related to the band.

If you’re a Beatles fantastic, I can heartily recommend the Magical Mystery Tour. This is a two-hour tour around the city centre on a brightly coloured bus, visiting all of the best places associated with the band on the way!

You’ll go past Paul and John’s houses, Penny Lane, Strawberry Field and the bandmates’ former schools – some of the stops are just a drive-by, whereas you’ll disembark the bus for others.

If you don’t want to do the full tour, take a walk down Matthew Street. This is where the famous Cavern Club, where the bandmates played their first Liverpool gig, is located. There’s also a statue of Elenor Rigby and John Lennon here.

There are also two Beatles-themed museums in Liverpool; the Beatles Story and Beatles Museum. As the name suggests, the Beatles Story covers the band’s entire history, from their humble beginnings to global phenomena.

The Beatles Museum is a gallery of artefacts that belonged to all four band members. For me, the Beatles Story is more interesting and immersive, but hardcore Beatles fans definitely do visit both in one day!

Lunch at the Baltic Triangle

The Baltic Triangle, located just south of the city centre, is potentially the most popular spot amongst locals for lunch.

Street food stalls line the area, and you can gorge on anything from Gyros to fresh noodles. It’s the ideal place to grab a quick bite to refuel yourself for the afternoon’s activities!

It is a short walk from the waterfront area where all the Beatles attractions and museums are based, so you may find yourself backtracking to see the museums. However, it’s well worth the journey – it’s a Liverpool institution, and a marvellous place to enjoy local culture.

There are plenty more museums to check out while you’re in town, and it’s well worth visiting at least one more during your stay.

Here are some of the best:

Fantastic if you’re visiting Liverpool for the first time, this extensive museum covers all you need to know about the northern city. Plus, it’s free!

Life in Liverpool has constantly revolved around its docks, and you can learn all about it in this fascinating exhibition. It focuses on the extensive history of the port, with a particular emphasis on the 19th century, when Liverpool was the richest port in the world. Don’t miss the Titanic Exhibition, which details the fateful journey that this boat took.

This is probably the most important museum to visit in Liverpool. It’s located on the third floor of the Maritime Museum but deserves an entry in its own right.

It details the city’s connections with slavery, offering a sobering picture of how much Liverpool – and the UK in general – was involved in the Transatlantic Slave Trade. It also looks at modern slavery and its presence in both Liverpool and the wider world.

Did you know that London’s TATE Museum has a Liverpudlian counterpart? If you’re interested in art, then it’s well worth visiting this extensive gallery. What’s more, just like the TATE in the capital, entry to this museum is completely free!

Cruise on the River Mersey

No trip to Liverpool is complete without taking in the River Mersey. This river was a big reason why the city turned into such a powerhouse in the 19th century, and you can take in incredible views of the city, plus learn a little more about local life, by setting sail.

From the water, you’ll see Royal Albert Dock and Liverpool’s Cathedrals, and you can listen to a commentary all about Liverpool’s thriving history as a port city. It’s the ideal activity to do when you’re winding down for the day; on some vessels, you can even purchase a drink to enjoy while you take in the views.

Many tourists who visit Liverpool don’t know that it’s home to the largest religious building in the country (and the 8th largest in the world!).

That’s right, Liverpool Cathedral is one of the most significant religious buildings you can visit in the UK, so don’t miss it while you’re exploring the city!

Compared to other Cathedrals up and down the country, it’s very young – it was only finished in the 1970s. However, it’s home to the country’s biggest pipe organ and some of the highest bells in the world!

If you can, it’s worth ascending the cathedral tower and taking in views of the Mersey!

One last area that’s well worth visiting in Liverpool is Chinatown. It’s the oldest of its kind in the UK, dating back to the latest 19th century when Chinese merchants arrived in the city to trade.

Nowadays, it’s a bustling neighbourhood with plenty of shops and restaurants. You could choose to eat here – New Capital Chinese Restaurant is known for its fantastic Asian dishes – or just take a stroll around!

If you decided to not eat in Chinatown, there are plenty more restaurants to sample when you’re in Liverpool centre.

Try Panoramic 34 for excellent views over the river; as the name suggests, it’s located on the 34th floor of one of Liverpool’s tallest buildings. The cuisine is fine dining with an extensive wine list.

A night out on the town!

Liverpool’s known to be a great night out, so if you’re partial to a bit of nightlife, then spend your evening hitting up a few pubs, bars and clubs! Many of Liverpool’s best bars are located in its buzzing Georgian Quarter.

Here are some favourites:

Where to stay in Liverpool

If you’re a backpacker, Embassie Liverpool Backpackers is one of the most atmospheric places to stay in the city. Located in a 200-year-old building, it was actually the first hostel in Liverpool – so they really know what they’re doing when it comes to hosting backpackers, with free WiFi, free breakfast, a shared kitchen and 24-hour reception.

For a more budget-friendly hotel, Z Hotel has a branch in Liverpool. They offer great value, no-frills but comfortable rooms with en-suite bathrooms and modern decor.

The Titanic Hotel Liverpool is situated right by the river. The rooms are opulent and comfortable, and there’s a spa on-site, with a swimming pool and sauna and steam room facilities. If you want somewhere to relax after a busy day exploring the city, there’s nowhere better.

The perfect city break, Liverpool has a thriving culture, beautiful views over the Mersey River and plenty of history to learn about. While you could spend weeks learning about its many fascinating tales, you can get a feel for this buzzing metropolis in just one day. Make sure you keep referring back to this one-day in Liverpool itinerary to ensure that you make the most out of your trip!

Enjoyed reading about how to spend one day in Liverpool? Pin this article now, read it again later:

Claire Martin is a travel blogger and freelance writer who specialises in overland adventures. She’s drove around Australia, travelled from Bali to London without flying, lived in Mexico and has spent many months exploring Europe. You can follow her adventures on her blog, Claire’s Footsteps.

How to Spend One Day in Manchester Itinerary 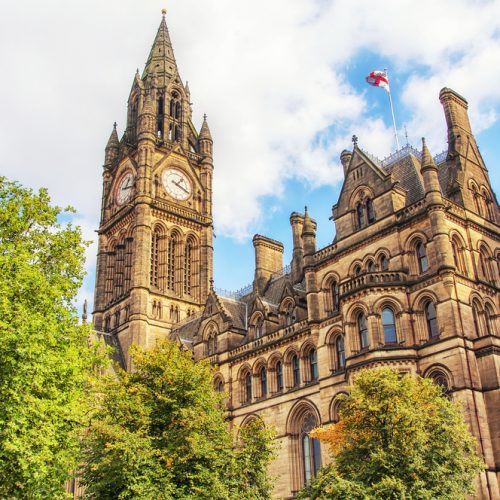 How to Spend One Day in Manchester Itinerary

3 shares
escapetobritain.com is a participant in the Amazon Services LLC Associates Program, an affiliate advertising program designed to provide a means for sites to earn advertising fees by advertising and linking to Amazon.com. As an Amazon Associate I earn from qualifying purchases.