Hidden away in Haldon Forest, just a short hop from the city of Exeter, is an Obelisk that was originally constructed as an aid to sailors navigating up and down the Exe Estuary, but which is now completely obscured by large trees. 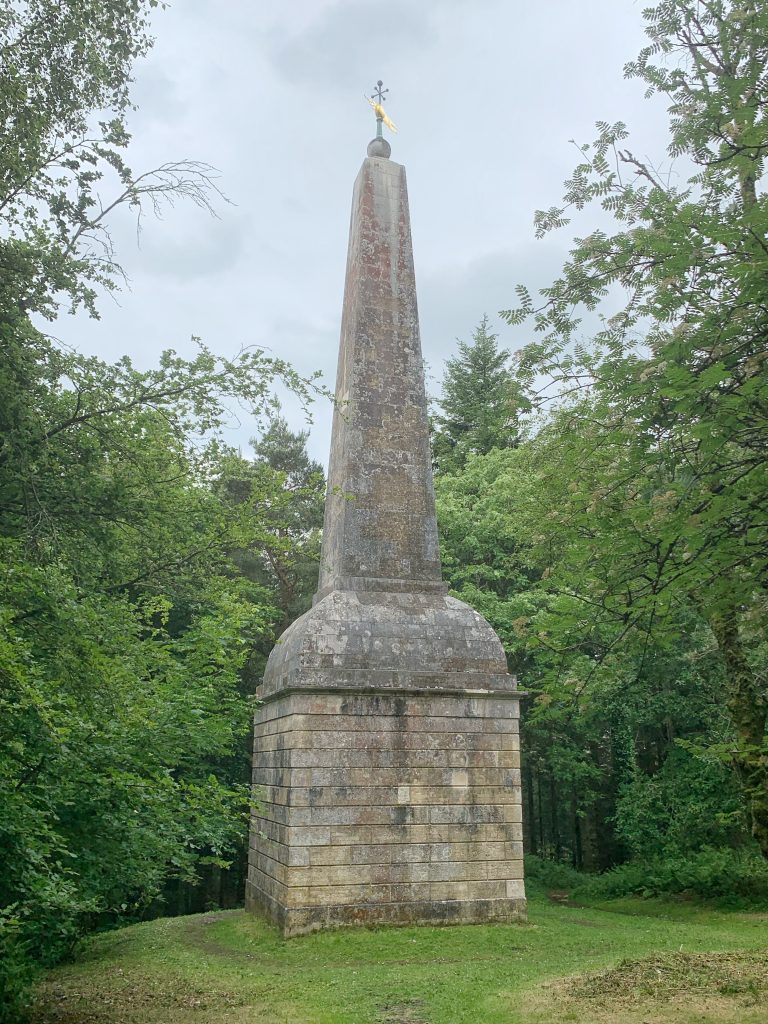 Haldon Forest is an area south of Exeter covering some 3,500 acres and consisting of several different woods. It’s managed by the Forestry Commission which is a non-ministerial government department that’s responsible for forestry across the breadth of England.

The woodland, of which much is coniferous, is the perfect destination for outdoor pursuits with a large selection of cycle and walking trails and some of the tracks are also suitable for horse riding.

Probably the most well known landmark to be found in Haldon Forest is the gleaming white Haldon Tower that can quite literally be seen from miles around whichever direction you happen to approach it from. 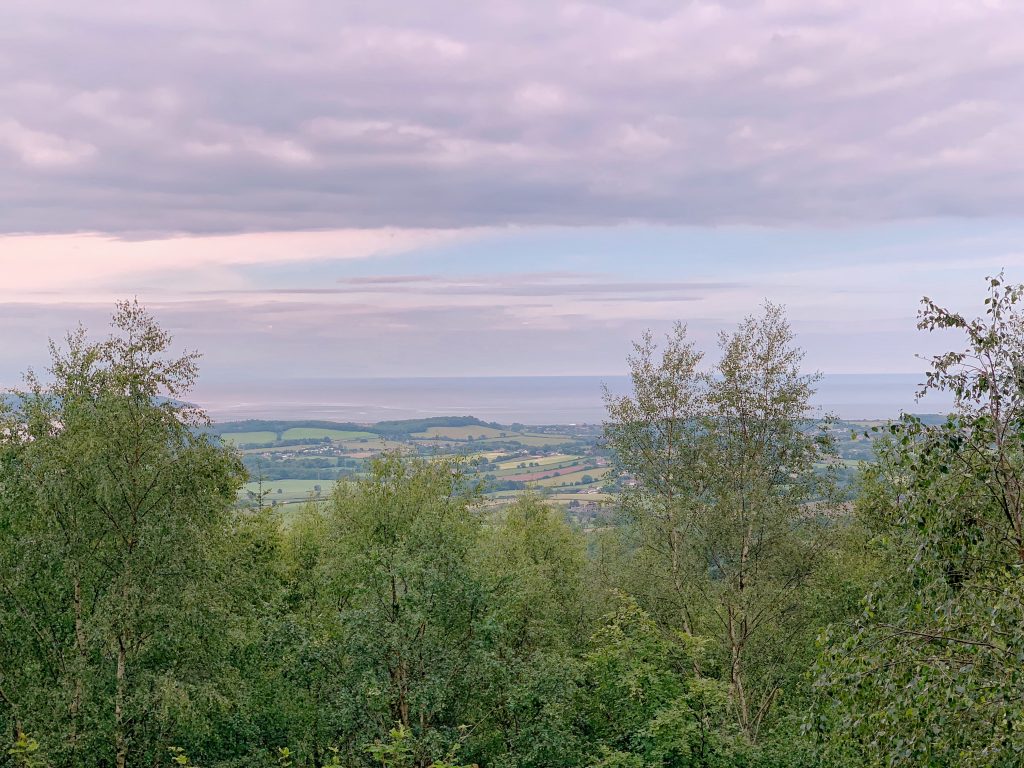 On the other hand the little known Haldon/Mamhead Obelisk is tucked away, obscured by the forest that has grown up around it, but can be discovered when taking a leisurely stroll along the Mamhead Trail. The view over the Exe Estuary on a clear day are simply breathtaking. However, even on a cloudy day, as depicted in the photo above, it’s still pretty sensational!

The Obelisk in Haldon Forest Park 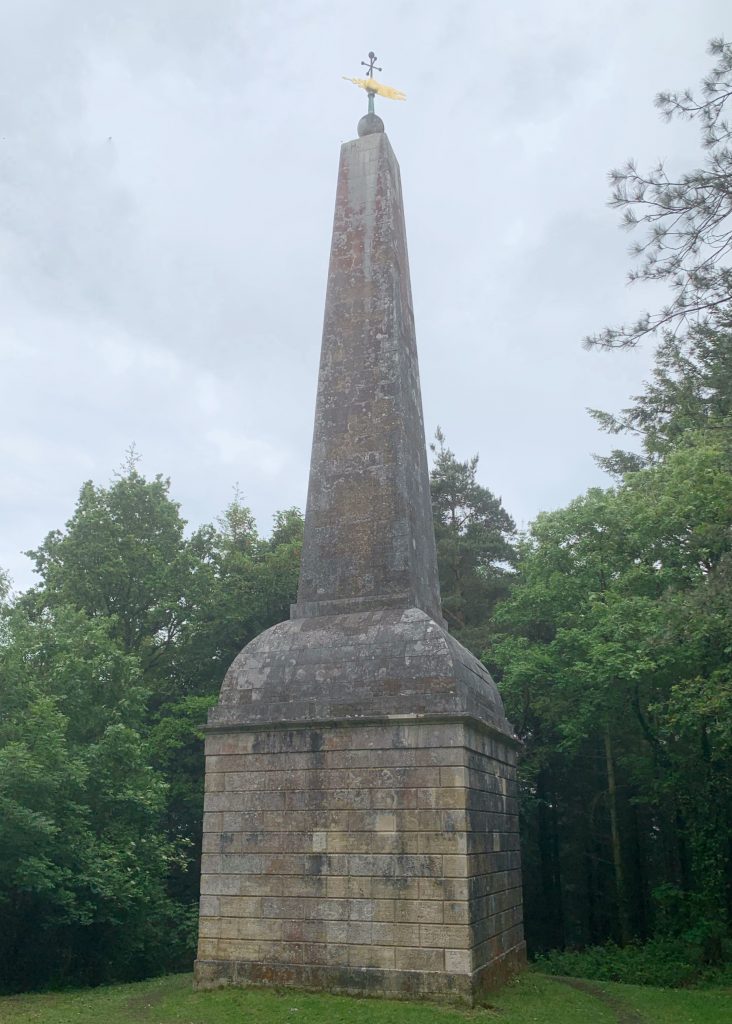 The 18th century Obelisk was built as a landmark for shipping passing through the Exe Estuary by Thomas Ball (1671-1749) who was the then owner of Mamhead Park, an ancient estate that was mentioned in the Domesday Book (1086).

Built c.1742 the tapering stone pillar is constructed from finely dressed light grey Portland limestone and is topped with a weathervane that’s shaped in the form of a flaming arrow. Today, the Grade II* listed structure, standing at one hundred feet, has much graffiti carved into the lower section.

This trail really is a hidden gem and has its own free car park located five miles from the principal one (where there are toilets,a cafe and a visitor centre). It’s of the few walks within the Haldon Forest complex where cyclists are not permitted making it ideal for families with young children and dog walkers.

The flat paths are perfect for all terrain buggies and/or wheelchairs with a number of benches and tables dotted along the way suitable for short breaks or an al fresco picnic. The piece de resistance has to be the stunning views onto the Exe Estuary and the nearby Mamhead Obelisk.

KENN – A small attractive village dominated by the historic Church of St Andrew and its ancient churchyard where you can see one of the oldest yew trees in Devon.

POWDERHAM CASTLE – A fortified Manor House with remnants of the building dating back to the latter part of 14th century. The property is home to the Earl and Countess of Devon. Open from the end of March to November, entrance to the castle is by guided tour only.

DAWLISH – A seaside resort that’s situated by the mouth of Dawlish Water, a small river also known as The Brook. Dawlish is famous for its black swans that were brought over from Western Australia in the 19th century and have become the symbol of the town itself. 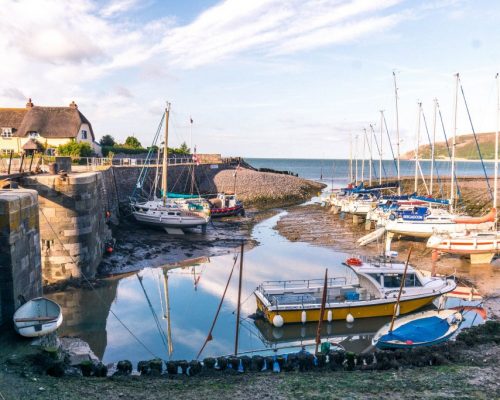 Porlock Weir: A Step Back in Time, Exmoor National Park 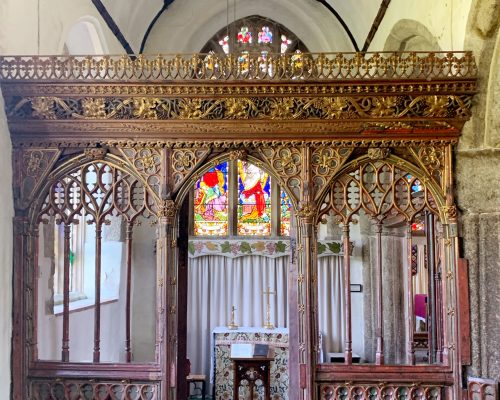