Bremilham Church lays claim to being the tiniest church, still in use, in England. It can be found, perched on a grassy mound, in the middle of a working farm, where it’s totally dwarfed by the surrounding farm buildings. The diminutive structure has made it into the Guinness Book of Records as the smallest ‘in service’ church in England. 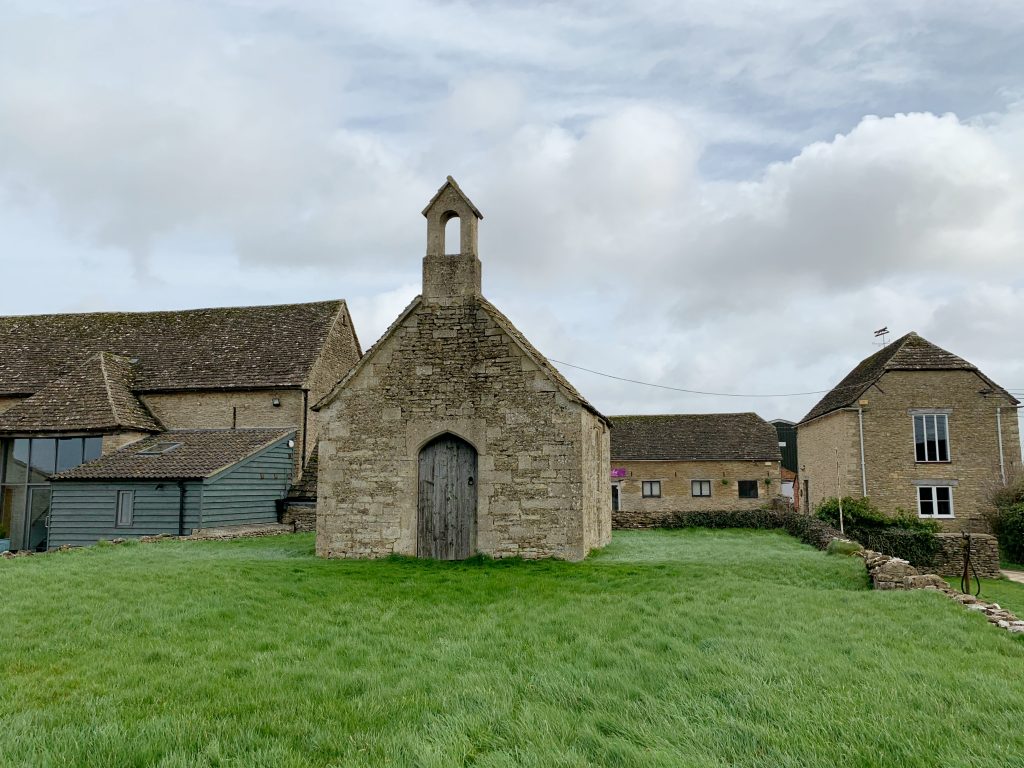 A Brief History of Bremilham Parish

Throughout its long history the parish of Bremilham was always very sparsely populated, and was one of the smallest parishes in Wiltshire. Malmesbury Abbey is said to have held the Manor of Bremilham, as part of the Brokenborough Estate, prior to the Norman Conquest of 1066.

The remains of this Saxon settlement which include a church and palace are located to the east and south-east, not far from the current day Bremilham Church. There is also evidence of Bronze Age burial mounds in the vicinity. 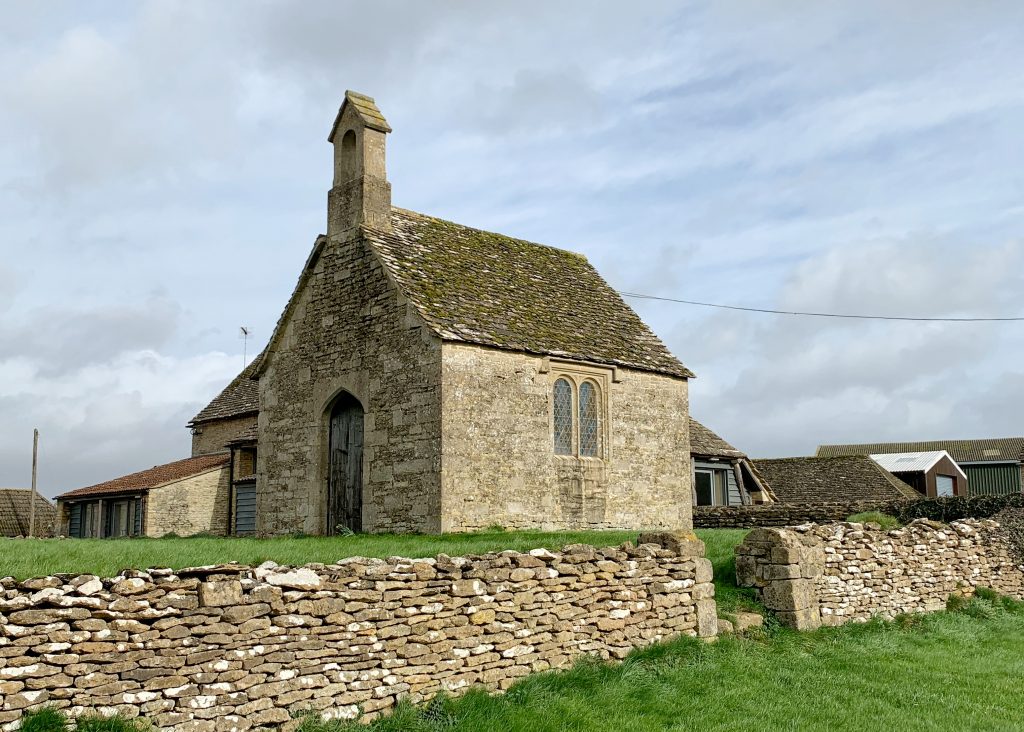 By 1731 the buildings of Cowage Farm and a church were the only buildings in the main part of the parish, which covered roughy 440 acres, excluding roads, water and waste and at no point in its history ever exceeded fifty people.

From the 16th Century the principal farm was called Cowage and this became an alternative name for the parish. The tiny parish was finally dissolved in 1884 and the main section, that of Cowage Farm, was added to Foxley, which in turn was merged with the civil parish of Norton in 1934.

From 1179 the tithes of Bremilham belonged to Amesbury Priory and there was already a church within the parish bounds. The church in 1809 was larger than the tiny building we see today. It had a nave measuring 25ft x 13 ft and a chancel 13ft x 11ft (the  size of the current church). At this time there were 13th century lancet windows in the chancel and 16th century windows in the south and west walls. 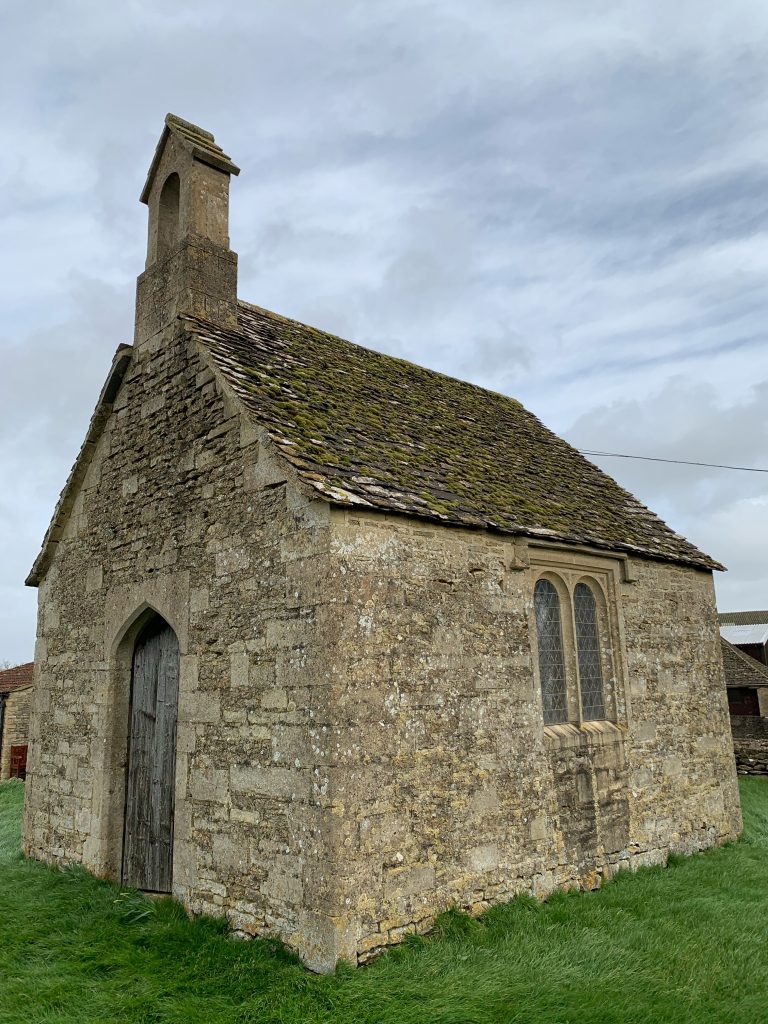 Unfortunately, the parish register only date back to 1813 and the church in not dedicated.

The church was largely demolished sometime in the mid 19th century for reasons unknown, but perhaps, because the owners of Cowage Farm didn’t want the high costs of maintaining a larger church. The current small building is remodelled from the earlier chancel with typical 19th century window additions and is Grade II listed and an octagonal perpendicular font. 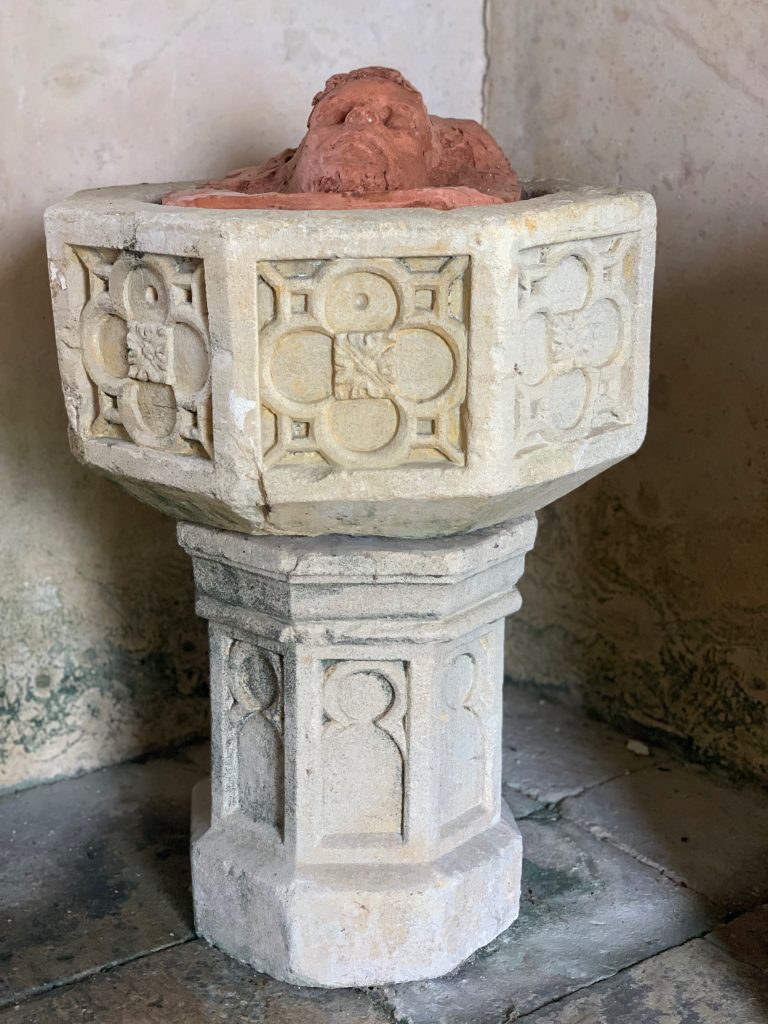 It is said that the building was used as a mortuary chapel for a brief period until the turn of the 20th century and that an agreement was drawn up whereby the upkeep of the building was to be paid by the owners of Cowage Farm. In fact, the building is incorporated into the deeds of the farm.

Cowage Farm and its diminutive Church 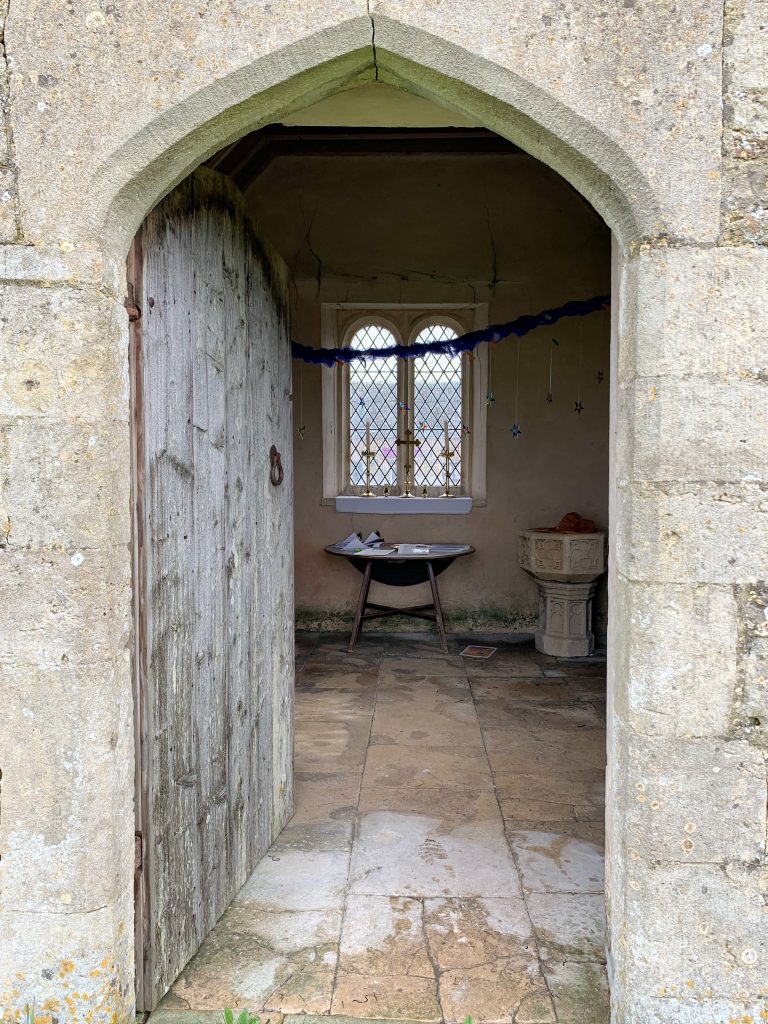 Cowage Farm is still a working farm today and the present farm buildings date from the 18th century. The farm supplies grains to household names such as Quaker Oats and Hovis; and its beef is purchased by McDonalds and Tesco.

For a number of years the church building was used to rear turkeys. It was only when the present day owners took over the farm that the church was reconsecrated. 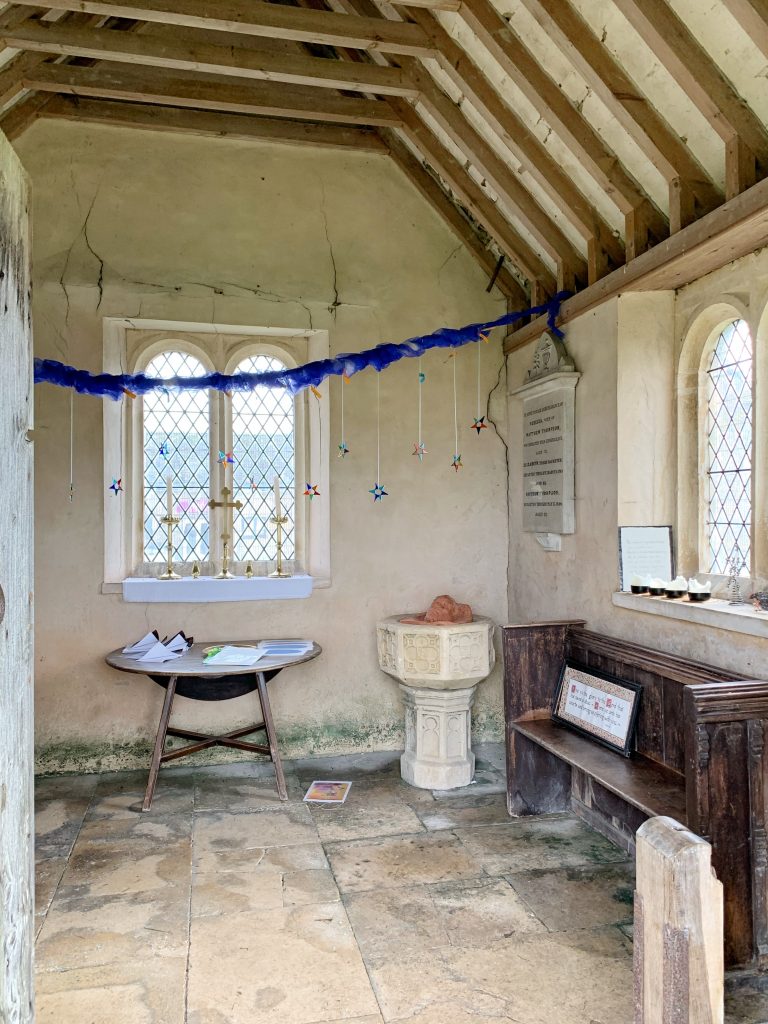 There’s just one service held at Bremilham per year and that takes place on Rogation Sunday – the service is always very well attended with up to 50 attending.  With just one pew within the church seating just four people and with standing for a maximum of ten people it means that the service is held outside come rain or shine.

MALMESBURY ABBEY – has a history dating back to the 7th century when it was founded by Aldhelm, nephew of King Ine of Wessex. The Abbey was a hotbed of culture and innovation with Eilmer the 11th century monk who flew from the abbey tower and William of Malmesbury is considered to be one of the greatest English historians.

WESTONBIRT ARBORETUM – With over 2,500 different species of trees and five national collections. Open throughout the year. 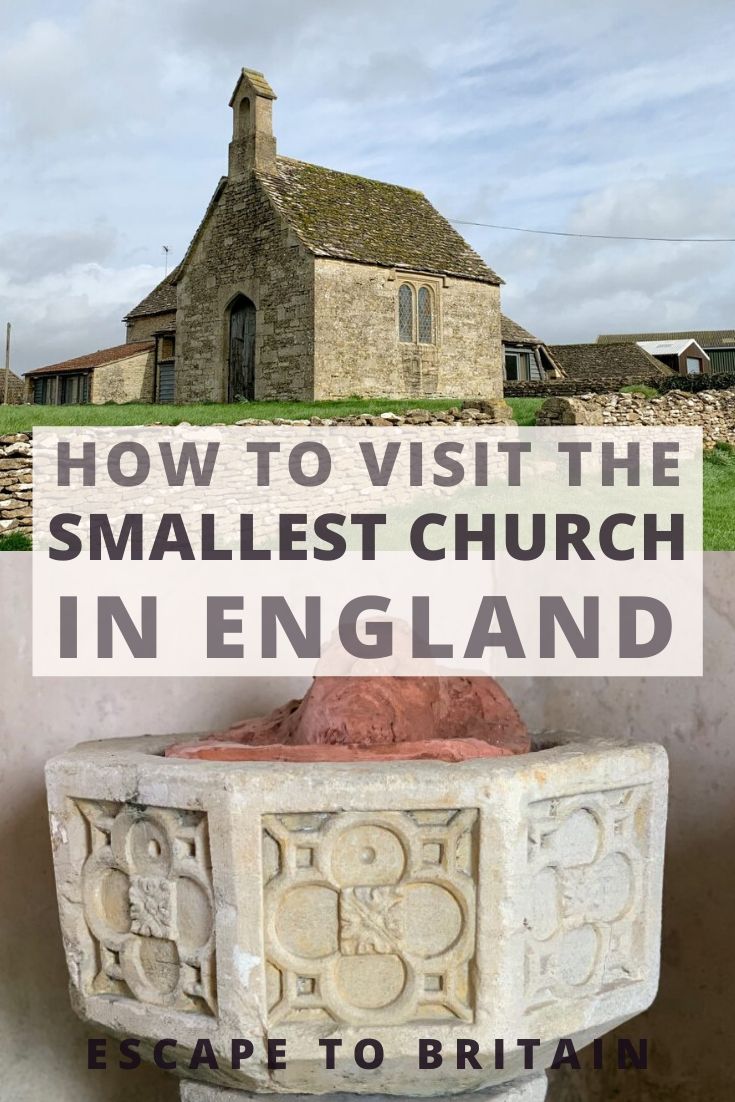 A Brief History of The Ten Commandments Stones on Dartmoor
A Walking Tour of Clovelly, North Devon’s Prettiest Village

16 shares
escapetobritain.com is a participant in the Amazon Services LLC Associates Program, an affiliate advertising program designed to provide a means for sites to earn advertising fees by advertising and linking to Amazon.com. As an Amazon Associate I earn from qualifying purchases.