Noss Mayo is a ‘must-see’ perfect picture postcard village set in a tranquil area of the South Hams! Steeped in history, teeming with diverse marine life and water sports aplenty, there’s something for everybody. 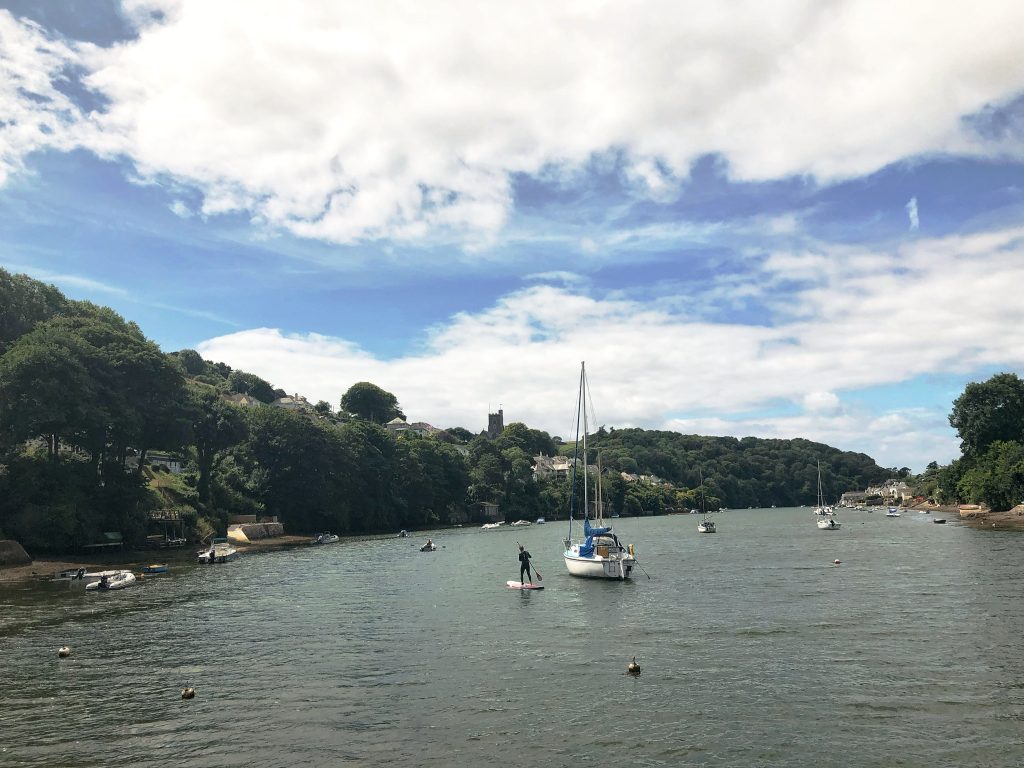 The quaint village of Noss Mayo lies within the South Hams, an area in South Devon well renowned for its amazing beaches, stunning landscape and diverse wildlife.In fact, The South Hams has some of the most unspoilt coastline in Britain and forms a large portion of the South Devon Area of Outstanding Beauty.

With a population of just over five hundred, Noss Mayo, can be found about ten miles east of the city of Plymouth along narrow winding country lanes. It nestles on the steep southern bank of Newton Creek,  a tidal arm of the Yealm Estuary, opposite the larger village of Newton Ferrers and surrounded by wooded hillsides. The village is located about a mile upstream from Wembury Bay. 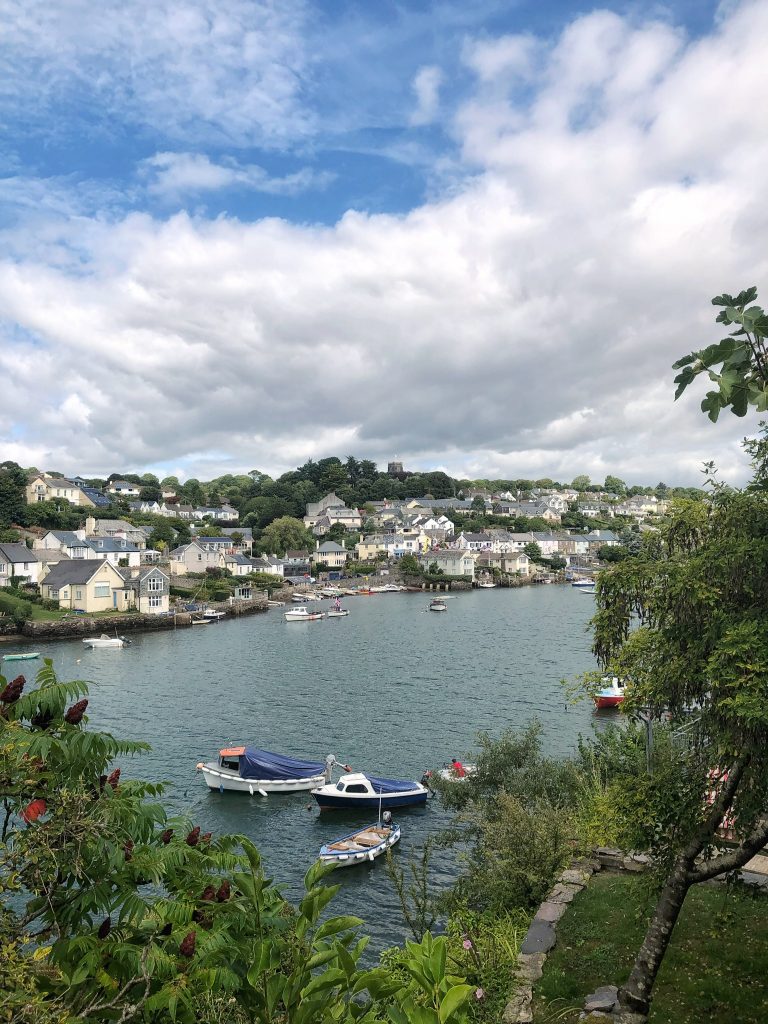 Things to do in Noss Mayo

Arriving in the village you feel as though you’ve been transported back through time to a gentler and more tranquil era, far from the madding crowd. On a fine Summer’s day, it’s wonderful to just sit and watch the activity on the creek itself.

You’ll see children swimming, paddleboarders, dinghies, yachts, and small outboards wending their way up and down the estuary. If it takes your fancy there’s a local sailing school or even boats for hire in the neighbouring village of Newton Ferrers. 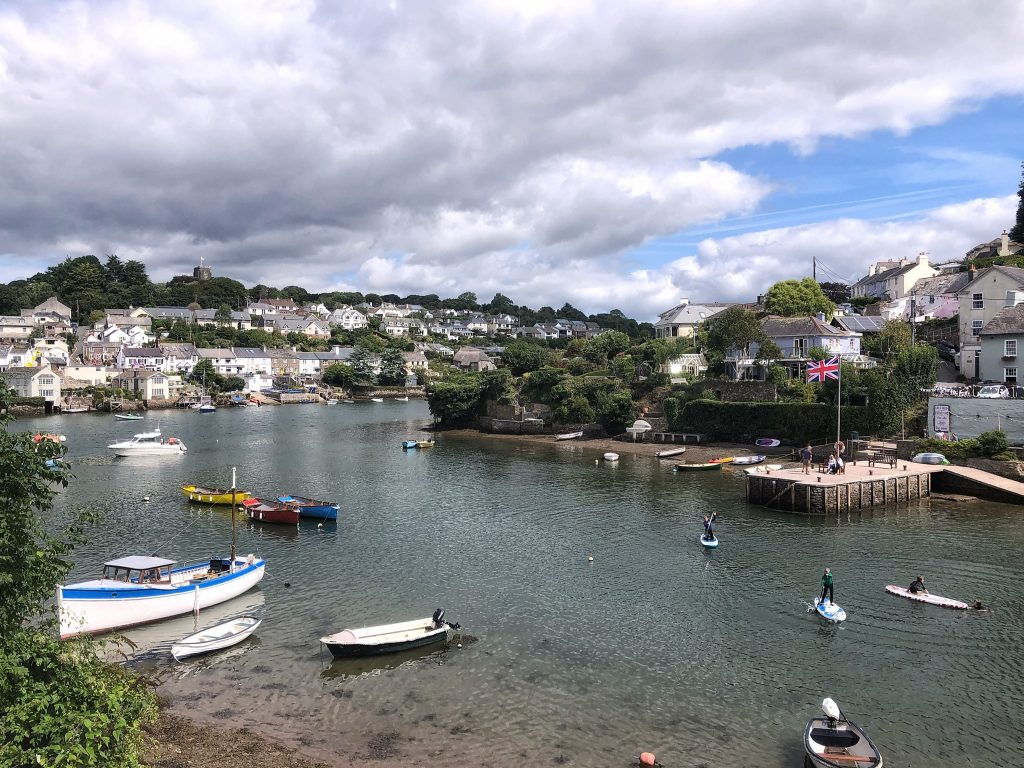 Or, you can simply enjoy the breathtaking scenery along the South West coastal path. Maybe take a walk to the remains of the original Noss Mayo church, St Peter the Poor Fisherman, Revelstoke, perched on the cliff above Stoke Bay. If you’re very lucky you might spot a seal, porpoise or even a dolphin along the way. It’s also a perfect spot for anglers and a bird watchers paradise.

Water Taxi/Ferry across the Yealm Estuary

During the Summer months, from Easter to the end of  September, it’s possible to cross the Estuary on a small water taxi/ferry. It operates a triangular service at the mouth of Newton Creek between Wide Slip (nr. Noss Mayo), Yealm Steps (nr. Newton Ferrers). And on the other side of the Yealm Estuary (on the Wembury side) the ferry-stop is at Warren Point.

Where to eat and drink in Noss Mayo & Newton Ferrers

Noss Mayo and its twin, Newton Ferrers, are great places to visit for a bite to eat or a pint of beer or two. The Dolphin Inn, found in nearby Newton Ferrers, is an attractive 18th-century drinking hole with great views from the outdoor terrace looking down onto the creek.

A little further up the hill is the ‘Tearoom on the Green’, serving great lunches and afternoon teas. All are homemade and all are equally as delicious as one another! If you’re looking for somewhere with great atmosphere and a view to die for look no further than the Ship Inn in Noss Mayo itself. The pub’s sited next to the creek with moorings adjacent to its terrace. There’s a varied gastro menu including fish and chips which are excellent! 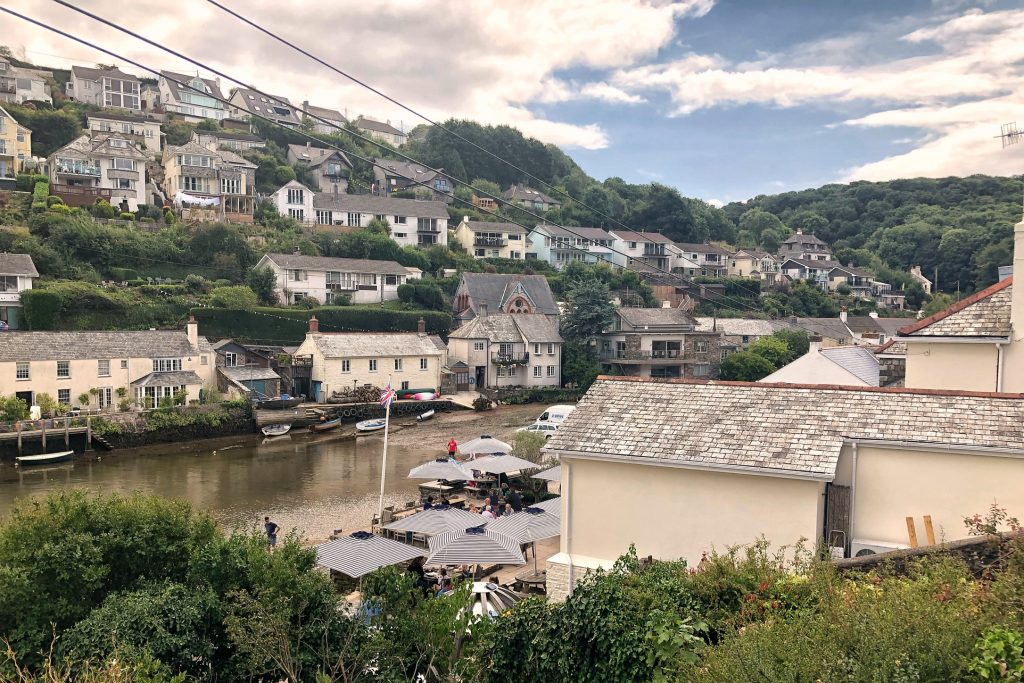 An Early History of Noss Mayo

First mentioned in 1198 when Richard Revel was the Lord of Stoke (a sub-parish of Yealmpton at this time) and so the area became known as Revelstoke. Almost a century later, King Edward I  gifted to Matthew (Matheu) Fitzjohn the manor of ‘Stok’ in 1287 and the area came to be known as Nesse Matheu. This is often cited as Matthew’s Nose but probably refers to the headland.

Both Noss Mayo and Newton Ferrers, which are in different parishes,  might have started out as ‘Cellars’ (Storehouses from the old French word celier). These were temporary structures constructed by farmers, to keep their boats, equipment for fishing and haul of fish.

By the 14th century, fishing was an important industry and Noss Mayo became a village in its own right. There was no church and so the villagers had a long walk to the Revelstoke Parish Church, St Peter. It was constructed during the 13th century about 1 1/2 miles away on the cliffs overlooking Stoke Bay.

In 1877, Edward Baring, of Baring Brothers, purchased the Membland Estate; this was over 4000 acres and included the village of Noss Mayo. (Barings being the very same merchant bank brought down by the rogue trader Nick Gleeson in 1995.) In 1885 he was raised to the peerage and took the title 1st Baron Revelstoke. 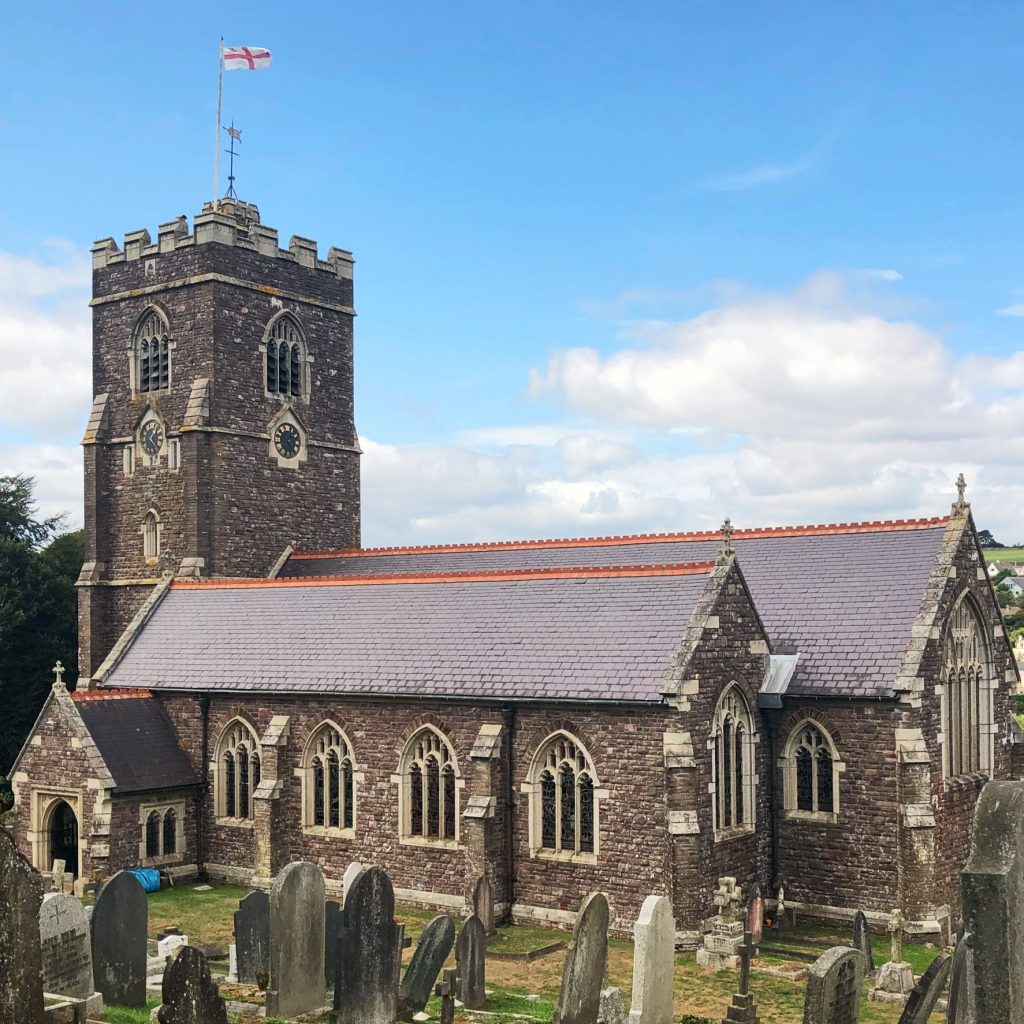 Edward Baring made many lavish improvements to his estate, among them building a new church within Noss Mayo. The Church of St Peter’s Revelstoke, consecrated in 1882, sits above the village mirroring  the earlier church of  Newton Ferrers.

No expense was spared and it’s well worth paying a visit to see the magnificent interior of St Peter’s. By 1890, after a number of risky investments, Lord Revelstoke was in serious debt and his wonderful Membland Estate, including Noss Mayo, was sold off piecemeal.

Places of interest near Noss Mayo

Revelstoke Drive – One of Lord Revelstoke’s flamboyant ‘improvements’ to his estate. It’s a wide track, built in 1880, along the coast from Noss Mayo to Stoke Point to ‘wow’ his visitors as part of a nine-mile circular carriage ride.

Church of St Peter the Poor Fisherman, Revelstoke – 13th Century Remains. It was badly damaged by storms in the mid 19th and then superseded by the St Peter’s Church, Noss Mayo built by Lord Revelstoke in 1882.

Saltram House – set in beautiful parkland overlooking the River Plym. Owned by the National Trust and about 5 miles from Noss Mayo.

Enjoyed reading about the best things to do in Noss Mayo, South Hams? Pin it now, read it again later: 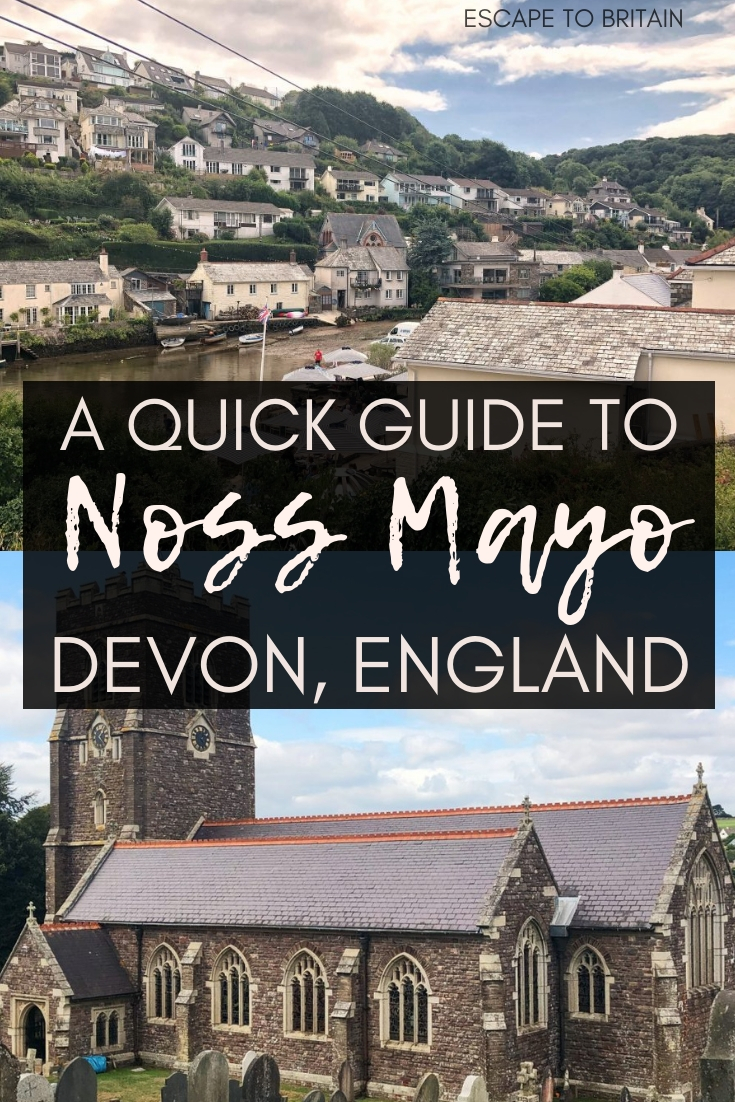 Imber: The Village on Salisbury Plain with No Postcode
Haytor Quarry and Tramway: Industrial Heritage on Dartmoor 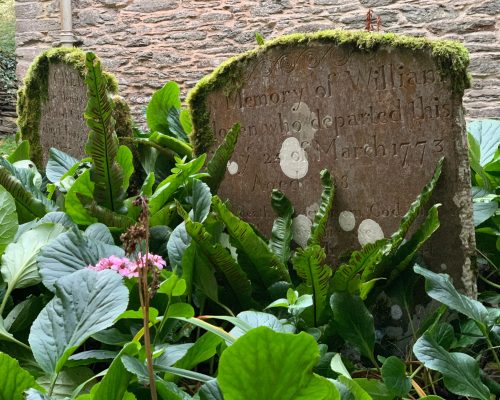 40 shares
escapetobritain.com is a participant in the Amazon Services LLC Associates Program, an affiliate advertising program designed to provide a means for sites to earn advertising fees by advertising and linking to Amazon.com. As an Amazon Associate I earn from qualifying purchases.