Cerne Abbas’ claim to fame in recent years is for its enormous rude nude club-wielding Giant chalk figure on nearby Trendle Hill that, incidentally, was perhaps created as a huge ‘up yours’ political satire to Cromwell in the 17th century!

Well over a thousand years ago, long before the aforementioned Cerne Abbas Giant was even a glimmer in its creator’s eye, a Benedictine Abbey, one of the largest ancient monasteries in England, was founded and the village of Cerne Abbas sprung up around it. 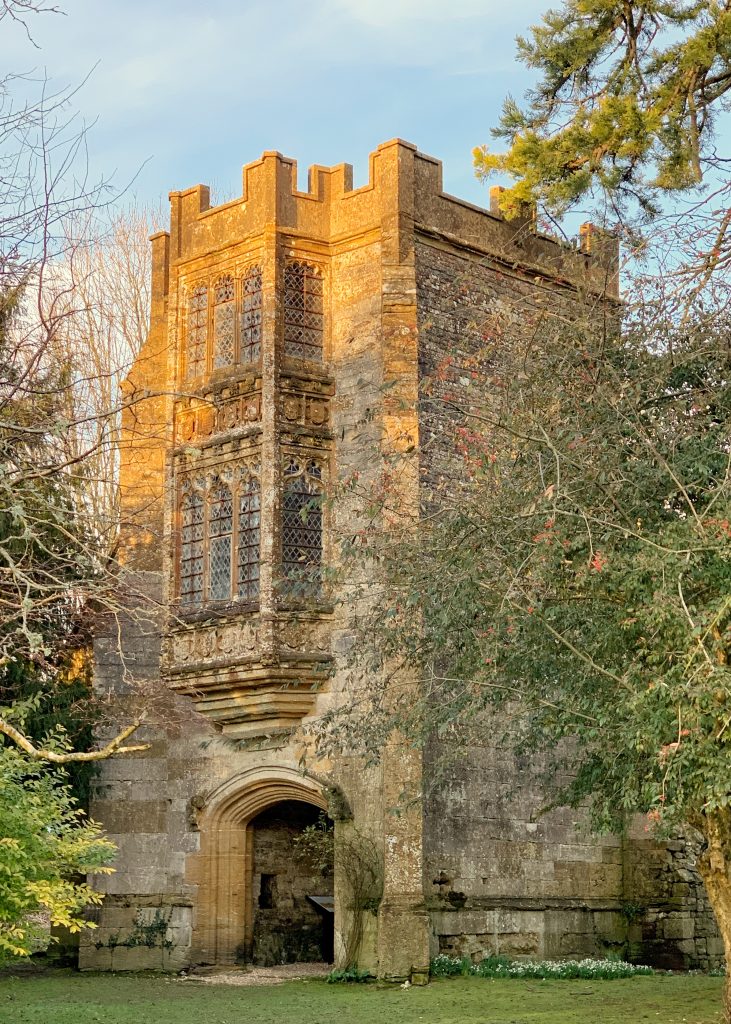 With verdant pasture land and a ready water supply from the River Cerne, that meanders along the valley carved into chalk hills, it’s not surprising that the area has been inhabited for millennia. There’s evidence of Iron Age activity and Roman artefacts dating to the 2nd century AD discovered in Simsay Field which is just east of the village.

Fact or Fiction about St Augustine at Cerne Abbey

Like so many places across Britain, fact, fiction and legend have become inextricably entwined in the dark and distant past making it almost impossible to provide precise dates about when and indeed who founded the first Abbey at Cerne Abbas. (By the way, Abbas is the Medieval Latin word for abbot.)

In Coker’s ‘Survey of Dorsetshire’ that was first written in the 1620s by Thomas Gerard but first published under the name of John Coker in 1732 he describes Cerne Abbas thus:

“Memorable in former Ages for a faire and rich Abbie of Black Monks* which stood there, first built by St. Augustine, after Archbishop of Canterbury, when in that Place he had broken downs the Altars of the Saxons God, Heile, whom they honoured as Conserver of their health…

(*The Benedictine monks were often called the Black Monks due to the colour of their religious habits.) 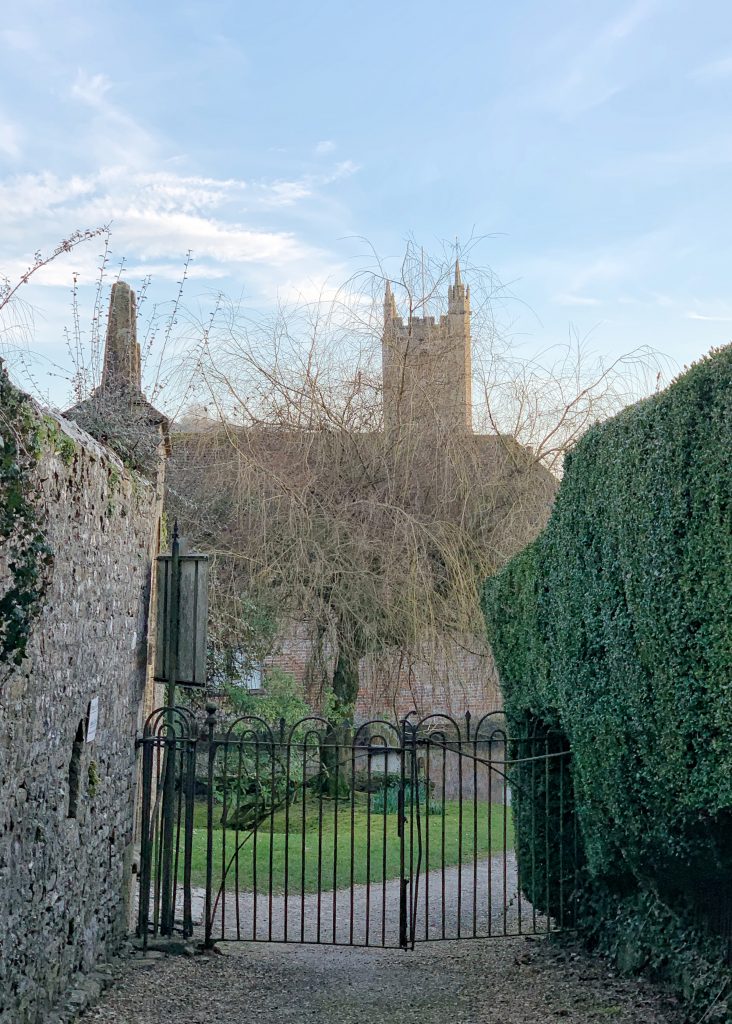 St. Augustine was a Benedictine monk who became the first Archbishop of Canterbury in 597 and died c. 604 A.D. It’s highly unlikely that he ever made it as far west as Dorset but the link between St. Augustine and Cerne Abbey was recounted by the famous 12th-century historian and chronicler, William of Malmesbury.

During the Middle Ages, the pilgrimage industry was a huge thriving business and people flocked to the various shrines for many reasons – piety, penance, healing by miraculous intervention and indulgences (a sort of insurance to get through Purgatory faster) to name but a few. And people were prepared to pay big bucks for all of this.

The shrines were truly important generators of revenue for the monasteries via a number of different income streams. First and foremost were the donations that were made to the shrine on arrival, the relics and devotional objects including pilgrim badges were sold in situ and of course a full range of ancillary services that were offered including food and board.

With this in mind it’s not hard to see how the Benedictine monks created an enormous income from the two religious shrines of St. Augustine and St. Eadwold that both reputedly, and rather conveniently, had amazing healing powers and were located at Cerne Abbey. 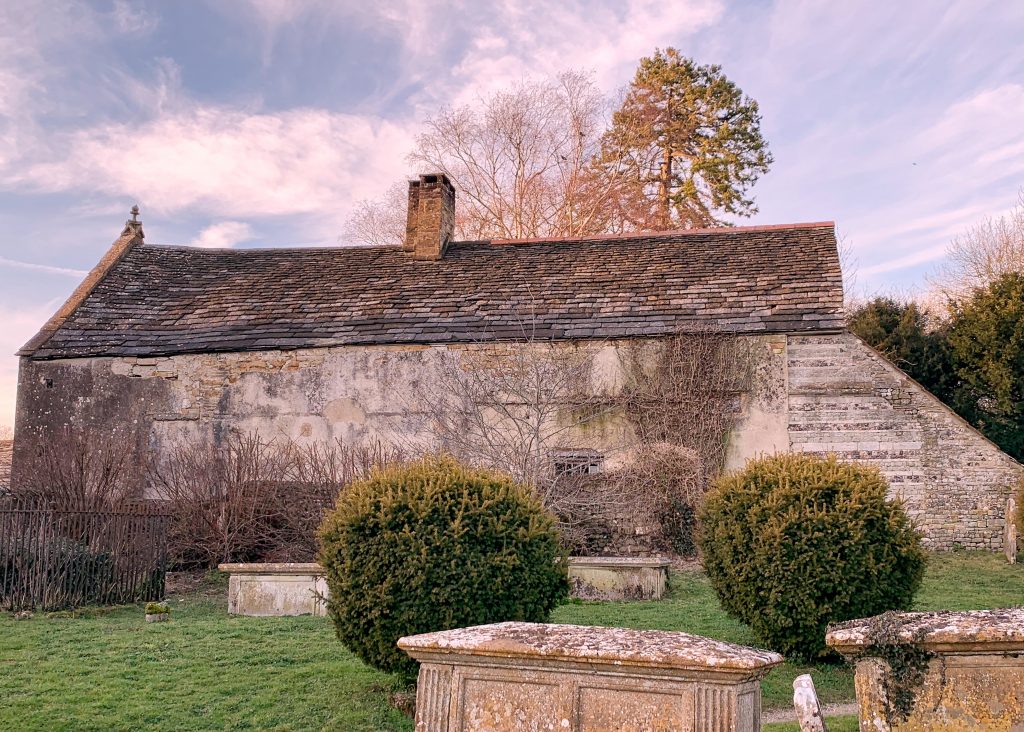 St. Augustine’s Well, also known as the Silver Well, was allegedly created after a miracle performed by St. Augustine himself and can still be seen in the Cerne Abbas churchyard. A Saint making water flow from the ground is a theme repeated over and over in the medieval hagiographies.

In the Middle Ages, the well was covered by St. Augustine’s Chapel which was most probably destroyed during the Dissolution. The legend was in all probability created by the Benedictine monks themselves.

In the 9th century, according to the writings of the 11th-century Benedictine monk Goscelin, Eadwold (835-c.900), who was a brother to King Edmund of East Anglia, created a hermitage on a hill about four miles from Cerne Abbas after the murder of his brother. He spent the rest of his life surviving on just bread and water and performed numerous miracles. His body is said to have been buried at the Church in Cerne Abbey.

The founding of The Benedictine Abbey at Cerne Abbas

There seems to be no doubt that before the foundation of the Benedictine Abbey in 987 A.D. there had been a long Christian association with the site but exactly when and who lived there remains a long kept mystery that is unlikely to ever be solved.

Cerne Abbey was founded in 987 by Aethelmaer Cild, otherwise known as Aethelmaer the Stout, who became an important Thane in the household of King Aethelred the Unready, who was on the throne from 978 to 1016. 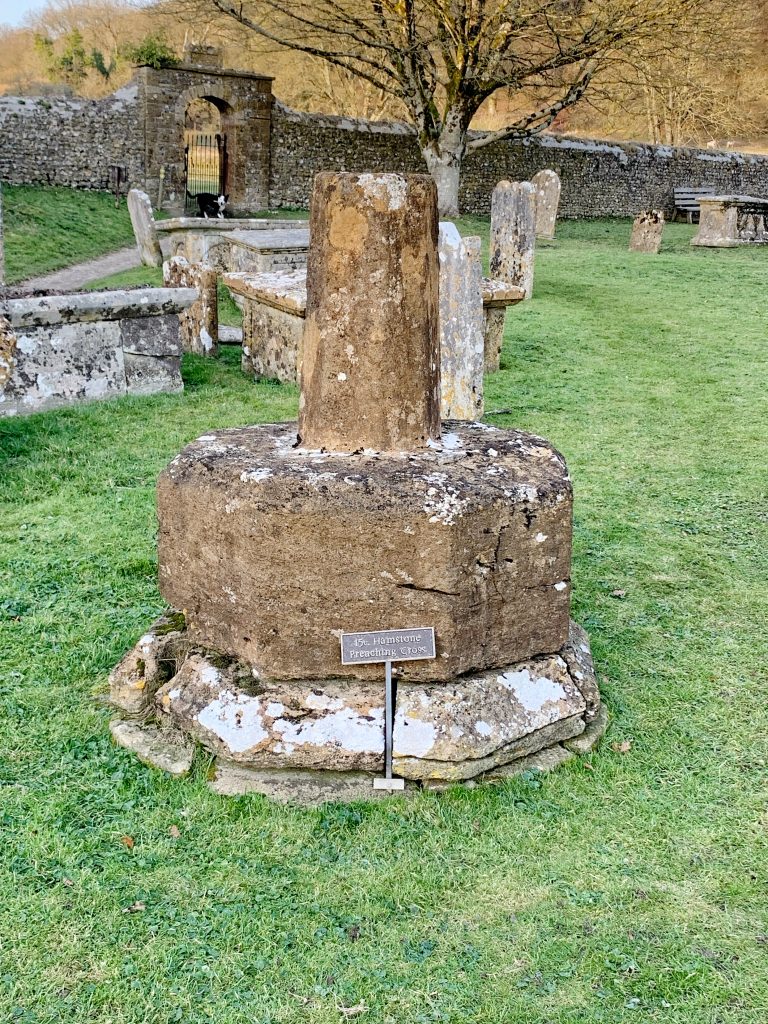 According to John Leland (c.1503-1552), who is widely regarded as the ‘Father of  English History’ Aethelmaer also founded Eynsham Abbey in Oxfordshire and Bruton Priory in Somerset.

The Vikings plundered the Benedictine monastery at some point during the numerous raids that were carried out from the late 990s up until King Canute was finally crowned in 1016; after this date, Canute is believed to have become a benefactor of the Abbey.

Aelfric of Cerne (also known as Aelfric of Eynsham, the Grammarian and the Homilist

No history of Cerne Abbey would be complete without mentioning Aelfric (955-1010), a monk and a prolific author in both Old English and Latin of which numerous writings have survived. It’s estimated that roughly 15% of all Anglo-Saxon writings still in existence today are by him and according to the renowned Historian of the Medieval Period, Claudio Leonardi, he ‘represented the highest pinnacle of Benedictine reform and Anglo-Saxon literature.’ 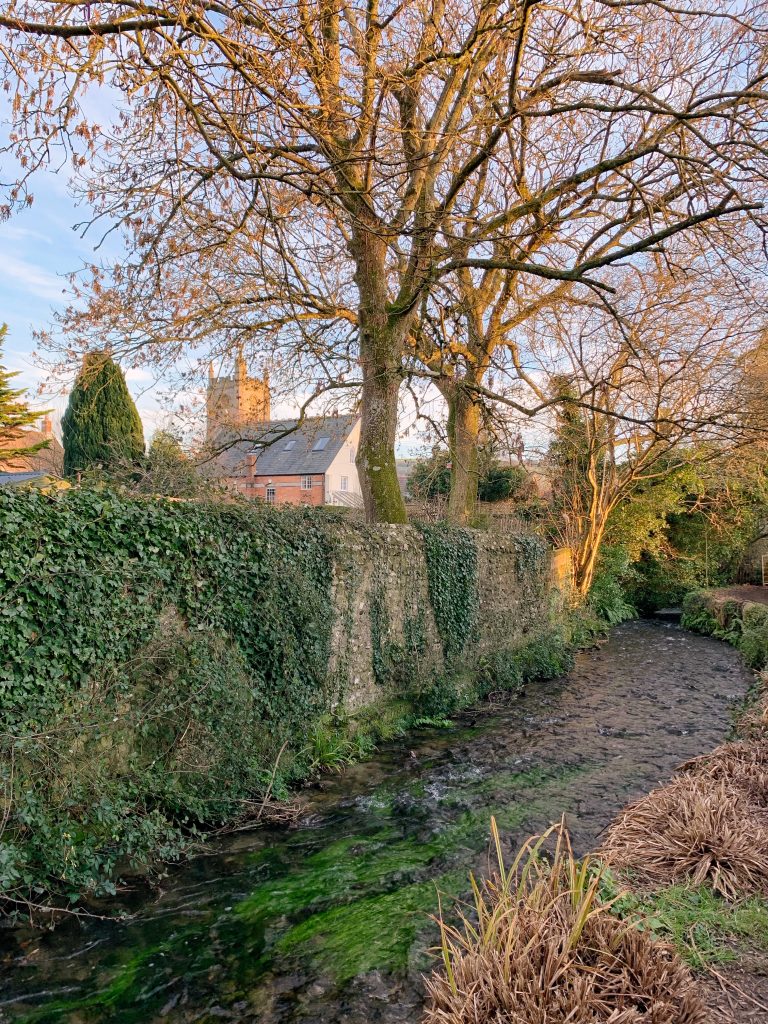 Just prior to the founding of the Benedictine Abbey, Aelfric was sent from the Old Minster at Winchester to serve as mass-priest and schoolmaster at Cerne Abbas and was appointed Abbot c.987. He resided there for over fifteen years until becoming Abbot of the new Eynsham Abbey in 1005 that was founded by his patron Aethelmaer, who also founded Cerne. (It’s interesting to note that Aethelmaer retired from the court in 1005 and went to live within the community at Eynsham Abbey.)

During his time at Cerne, Aelfric wrote prolifically and this included the two series of Catholic Homilies and Lives of Saints. He also wrote a number of teaching books including his Latin Colloquy and a Grammar which was the first ever Latin ‘textbook’ in English or indeed in any vernacular.

Cerne Abbey from the Norman Conquest

After the Norman conquest, the Abbey’s wealth continued to increase with further endowments and new privileges granted. One of the more unusual privileges was for the monks to reclaim salvage from all of the lands belonging to the Abbey lands along the coast. This was granted to them in an undated charter by Henry II (1133-1189).

In 1214, King John granted Cerne Abbas the right to hold a weekly market; and in 1460 Henry VI granted the village permission to hold three fairs per annum. 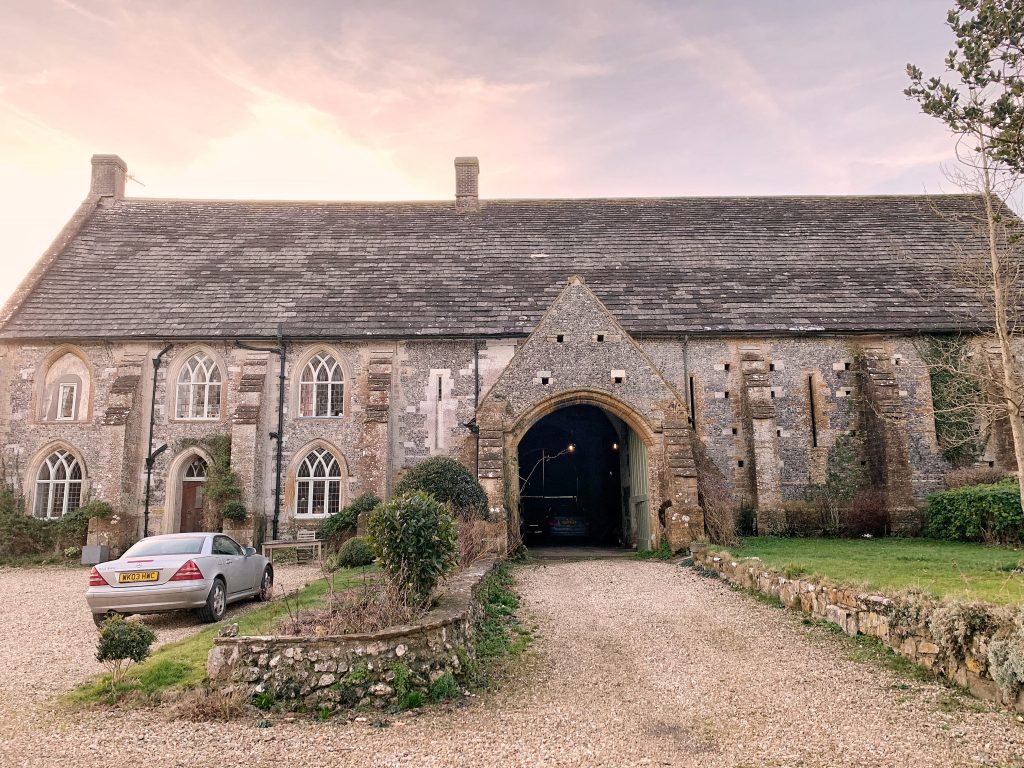 As an extensive Medieval landowner, the monastery had numerous tenants all of whom had to pay a tithe – which was a tenth of everything they produced. These tithes were held in a large Tithe Barn, which is found to the west of the village.

The existing barn, seen above, was constructed in the mid-14th century. The south portion of this barn was converted into a house in the late 18th century and remains private property. However, a footpath runs across the land and so this impressive building can be viewed from the exterior.

Dissolution of the Monasteries and Cerne Abbey

Life in Cerne Abbas was to continue in a pretty unremarkable way until the 16th century when King Henry VIII wanted his marriage to Catherine of Aragon annulled. This ultimately led to the Dissolution of the Monasteries which was to have devastating consequences on ecclesiastical orders throughout the country, nowhere was immune.

A number of accusations, most probably trumped up, were brought against the Abbot and he was requested to surrender the monastery to the King. He tried to buy his way out and keep the control of the Abbey within the Catholic Church but to no avail. On 15th March 1539, Cerne Abbey was eventually given over to the King’s Commissioner and in exchange, the monks, Abbot and Prior who co-signed the Deed of Surrender received a pension. The same fate would befall Buckfast Abbey in Devon just a year later, in 1539.

Like many other ecclesiastical buildings around this time all of the monastery’s treasure ended up in the King’s coffers, the lands sold off and the buildings stripped of lead and left to decay. It’s hardly surprising that only a minute portion of Cerne Abbey has survived, but, what we can see gives a glimpse of how sumptuous it must have been.

The Abbey was the lifeblood of the village and so its demise had a severe impact on the entire village of Cerne Abbas and the livelihoods of its population. 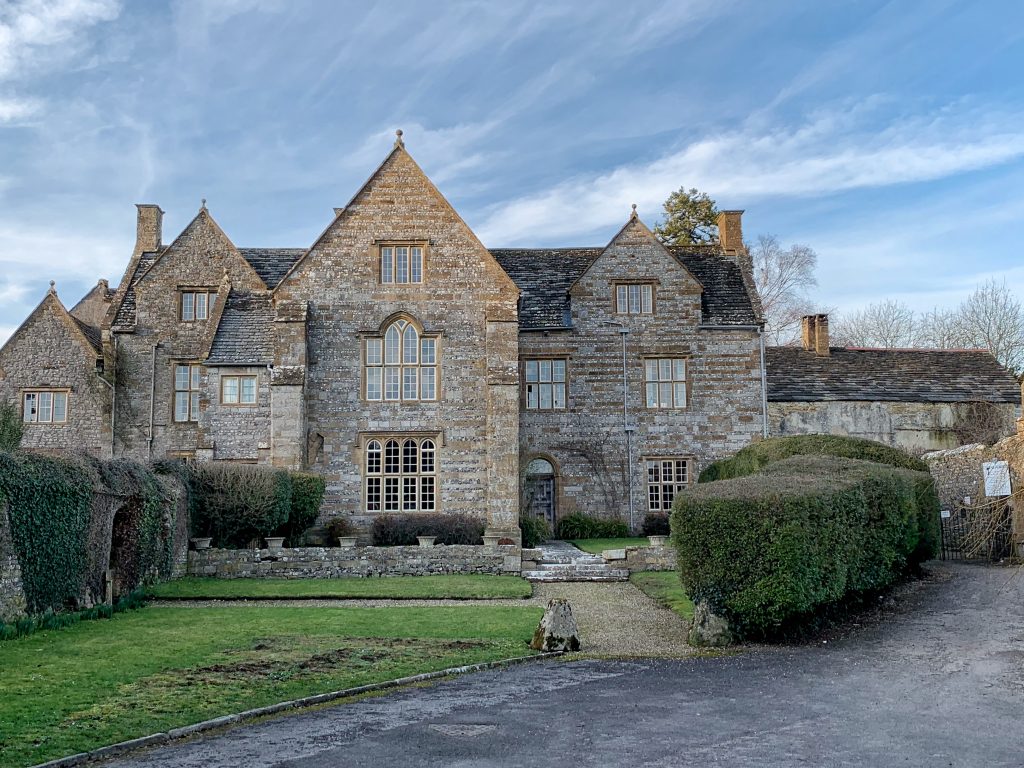 The first building that you come across as you walk up Abbey Street is the impressive exterior of Abbey House which is a private dwelling and holds the land upon which the rest of the ruins can be found. It may well have been, according to Pevsner, part of the main gateway to the Abbey.

Most of the house dates from c.1750 when a fire ripped through the property, but, there is still a portion of the late 15th century earlier construction. It was reconstructed using stone from the ruined monastic buildings.

The property now houses a fireplace, that was once found within the building which is now called the Abbey Guesthouse. This fireplace bears the initials of John Vanne who was Abbot from 1458-1470. 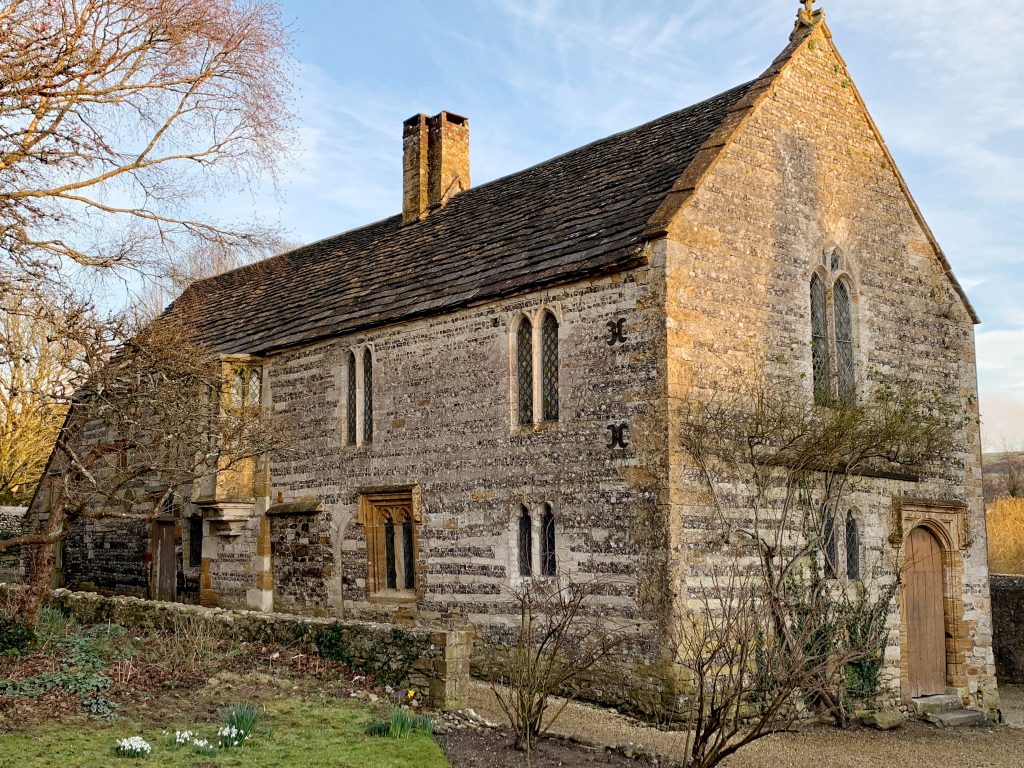 It was perhaps the Abbot’s Lodgings in the 15th century before being transformed into a Guesthouse.  The fireplace, as mentioned above, that is now in Abbey House was removed from the guesthouse and bears the initials of John Vanne, Bishop from 1458-70.

Porch to the Abbot’s Hall 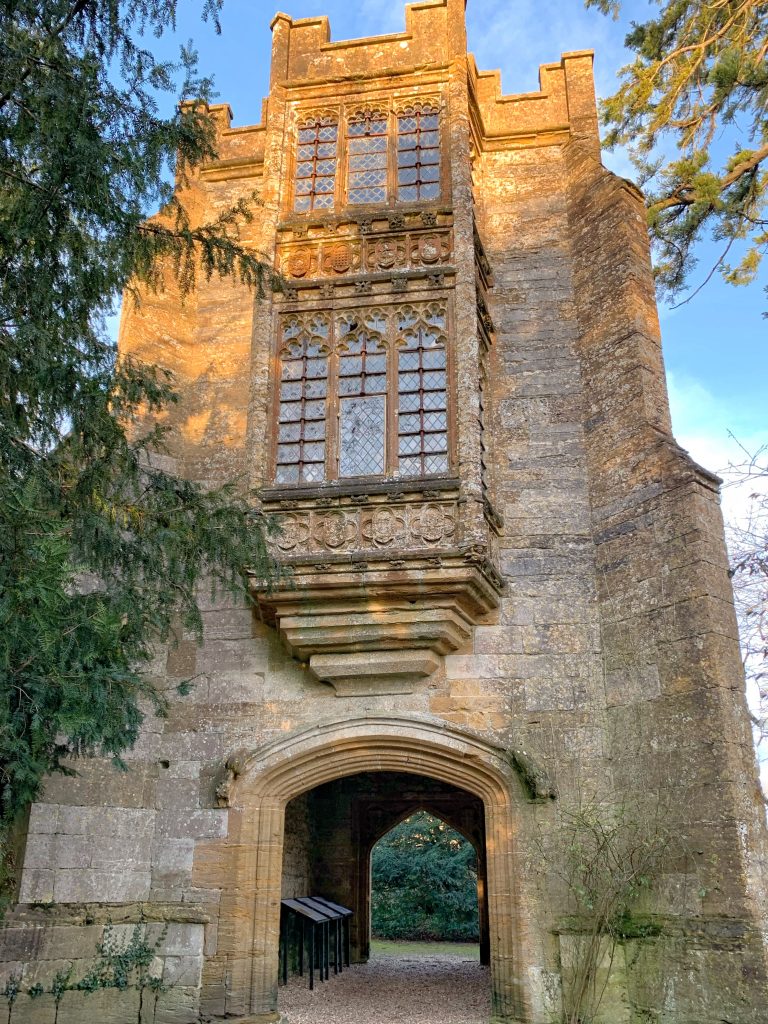 The exquisite porch was built for Abbot Thomas Sam (abbot from 1497-1509) and you can only begin to wonder what the Hall itself must have looked like. It has a magnificent two storey oriel window with decorative stone carving and internally there is a fan vault with bosses but, sadly, in a terrible state of repair. 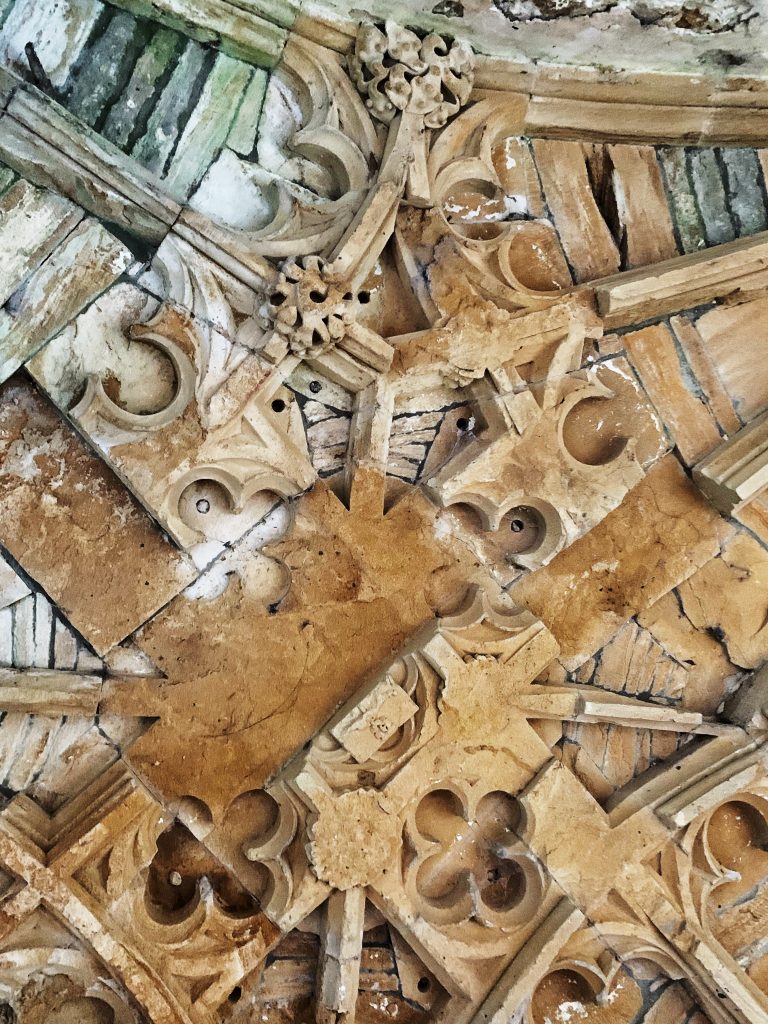 The Abbey ruins are located at the North end of Abbey Street just a couple of hundred yards up from the Church of St Mary and are situated on private land. The gate through to the ruins is normally open and visitors are welcome. There is a suggested £2.00 donation to be placed in an honesty box that is attached to the wall at the entrance gate.

Evershot – A picture perfect small village set in the heart of Thomas Hardy’s Wessex with a luxurious Country House Hotel situated within the centre of the village. The Acorn Pub, that serves local ales and delicious pub food, is said to have been the inspiration for the Hardy’s Sow and Acorn in Tess of the d’Urbervilles.

Sherborne – An historic market town full of ancient buildings including not one but two castles – a 12th-century castle set within the grounds of a magnificent 16th century Tudor mansion often referred to as the new castle. The town is also home to an Abbey that was once a Saxon cathedral and is still known as the Cathedral of Dorset.

Hardy’s Cottage – A small cob and thatch cottage that was the birthplace of This homes Hardy. The modest property, now owned by the National Trust, is where Hardy wrote his early novels – Far from the Madding Crowd and Under the Greenwood Tree.

21 shares
escapetobritain.com is a participant in the Amazon Services LLC Associates Program, an affiliate advertising program designed to provide a means for sites to earn advertising fees by advertising and linking to Amazon.com. As an Amazon Associate I earn from qualifying purchases.