The popular picturesque town of Dartmouth is located on the western shore of the River Dart estuary and is a hive of activity throughout the year, particularly during the summer months. Visitors flock to admire the attractive historic town with its numerous art galleries, restaurants and independent shops overlooking the harbour that is one of Devon’s oldest ports. However, there is one place that is generally overlooked and that is –  St. Saviour’s Church which has to be the best hidden historical gem in Dartmouth. 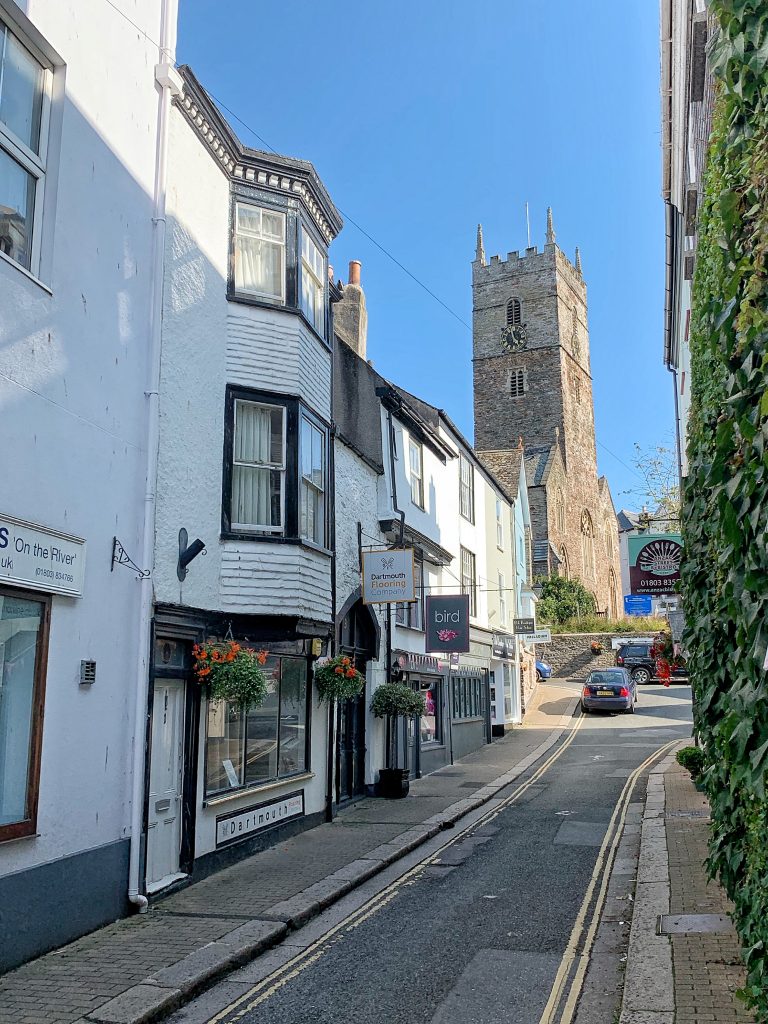 A brief overview of Dartmouth

With its sheltered position and incredibly deep harbour, it’s easy to understand why Dartmouth and the surrounding area has been such an important strategic position throughout the centuries. During the 12th century, Dartmouth was an assembly area for ships embarking on both the Second and Third Crusades.

The Normans had also realised the importance of Dartmouth as a harbour for cross channel journeys and this was to lead to a burgeoning wine trade, chiefly with Bordeaux, that was to last for over three centuries (12thC-15thC). It was during this period that St. Saviour’s Church was constructed, originally as a chapel of ease. Prior to its erection, the parishioners had to walk almost a mile to reach the ancient church of St. Clements that stood at over 400ft above sea level. 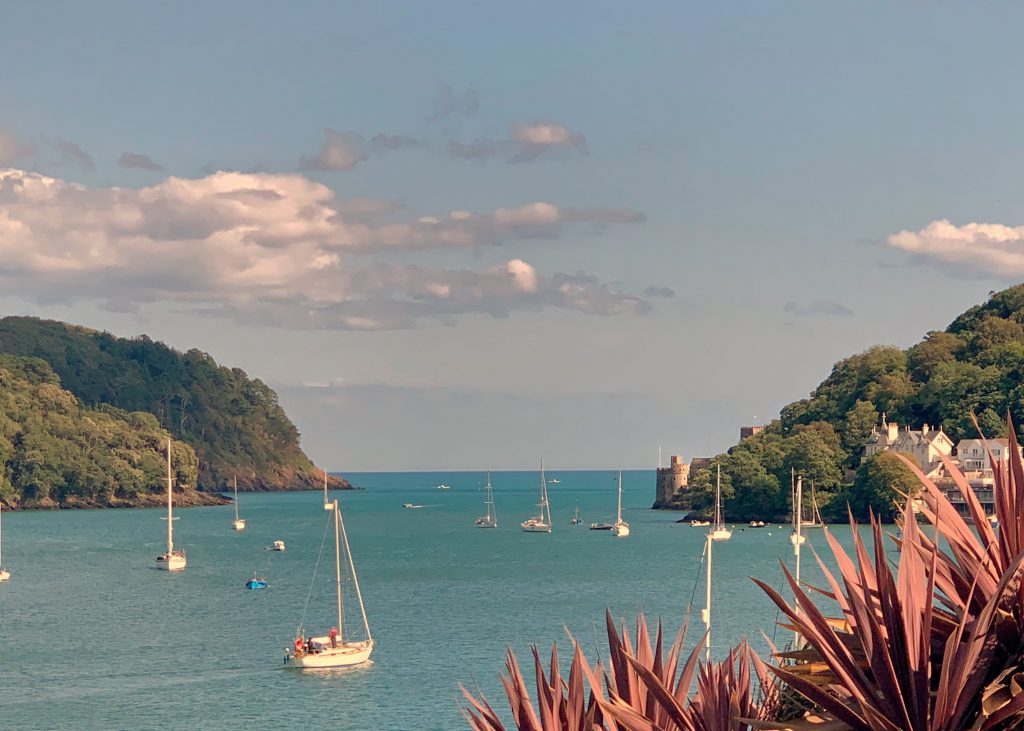 It’s hard to envisage what early Dartmouth, when the church was first constructed in the 14th century, must have looked like. The shoreline, which at the time was no more than a river beach was so very different from what we see today; the tide used to rise right up to the church at high tide.

Over the subsequent centuries, the land was gradually reclaimed from the river by manmade interventions and a natural silting process that has forever changed the topography of the River Dart.

A Short History of the Construction of St. Saviour’s Church 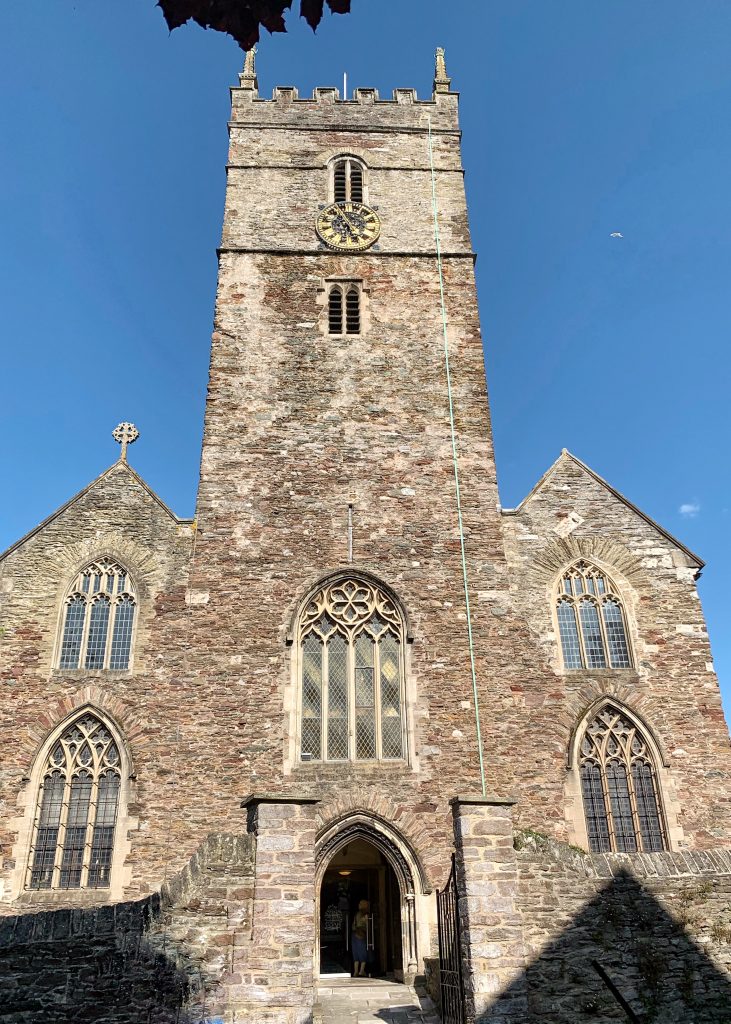 As Dartmouth prospered and grew in size it became evident that a place of worship was required in the town itself rather than all the parishioners having to make the laborious 400ft ascent to the parish church of St Clements in Townstal almost a mile away.

A petition was made to King Edward I, during his visit in 1286, for a Chapel of East to be constructed close to the riverbank. The King agreed to this request but failed to consult with the Bishop of Exeter and the Abbot of Torre who both refused on financial grounds.  They would have had to pay for the upkeep of two churches and two priests.

Over the ensuing years, the townsfolk became increasingly frustrated and eventually allowed two Augustinian friars to build an Oratory in 1335. This was expressly against the wishes of the then Bishop of Exeter. He refused to consecrate the building and even excommunicated one of the citizens for donating the land to the friars; this was later revoked. It is at this point in history that the story of Dartmouth Church takes on an even more bizarre twist! 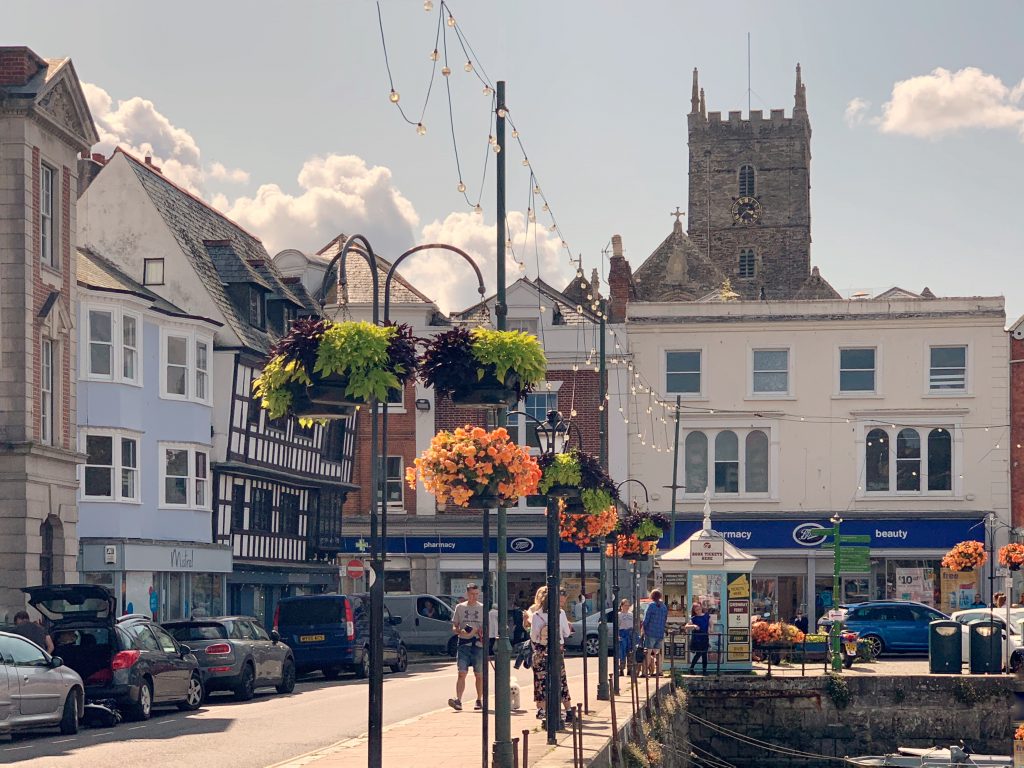 The ‘Bishop of Damascus’ arrived in the town saying he had been given a dispensation by the pope to consecrate the Oratory. It transpired that this stranger was just a friar from Cambridge and thus the consecration was not officially recognised and the friars forced to leave… the feud between the church and the town continued.

Finally, almost forty years later the Bishop and Abbot relented and granted the Dartmouth inhabitants the right to construct a Chapel of Ease so long as they covered the building costs and bore the cost of the services. The Bishop Brantingham of Exeter finally consecrated the ‘honesta capella de nova constructa’ to the Holy Trinity in 1372, almost a century after Edward I had first given his permission. The Chapel was rededicated to St. Saviour sometime before 1496.

* Two pairs of columns found in the west end of the nave are thought to be the only remaining part of the original oratory constructed by the friars. 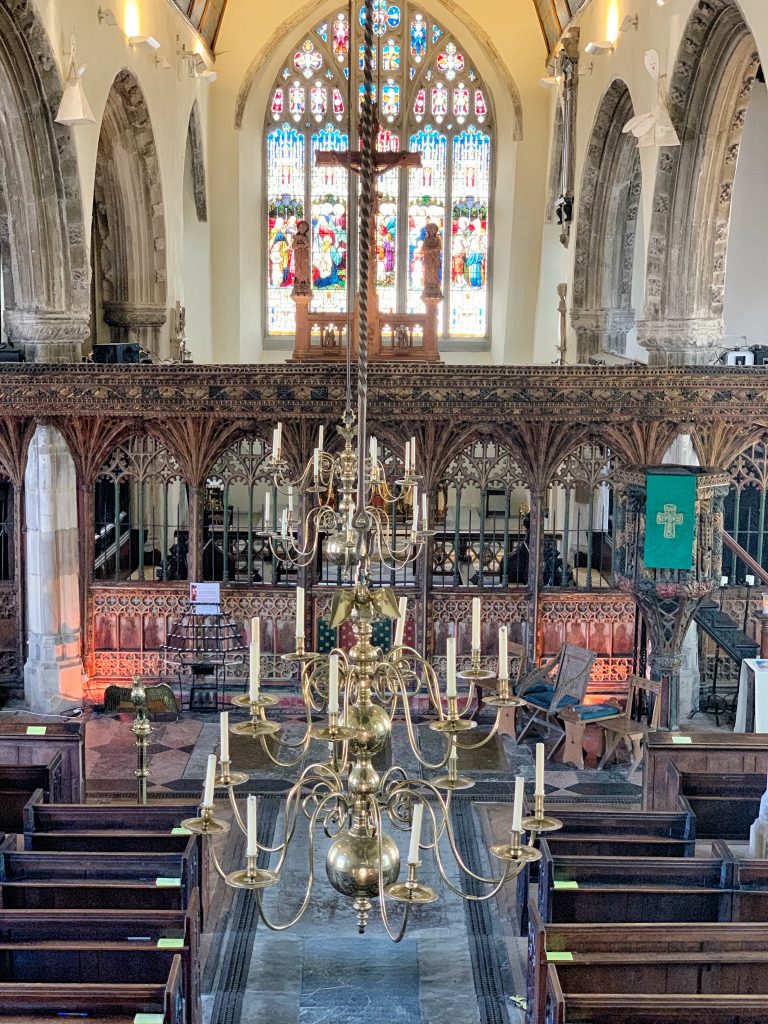 The beautiful interior has to be one of the most attractive in the whole of Devon and is full of historical gems. Above is a  view from the gallery looking towards the chancel. The two enormous brass chandeliers are thought to be over four hundred years old.

As already mentioned the two western bays are most probably the remnants of the original oratory, dating back to the early 1300s, that caused such controversy at the time of construction. The church was completed and finally consecrated in 1372 but has many later additions both structural and interior furnishings carried out through the centuries.

On entering the church through the south porch that was constructed in 1620 (this replaced an earlier structure) you come across a truly impressive oak door with strap hinges. The ironwork depicts two leopards, an animal that was synonymous with the  Plantagenet dynasty (1216-1399) and the door also incorporates the Tree of Life. 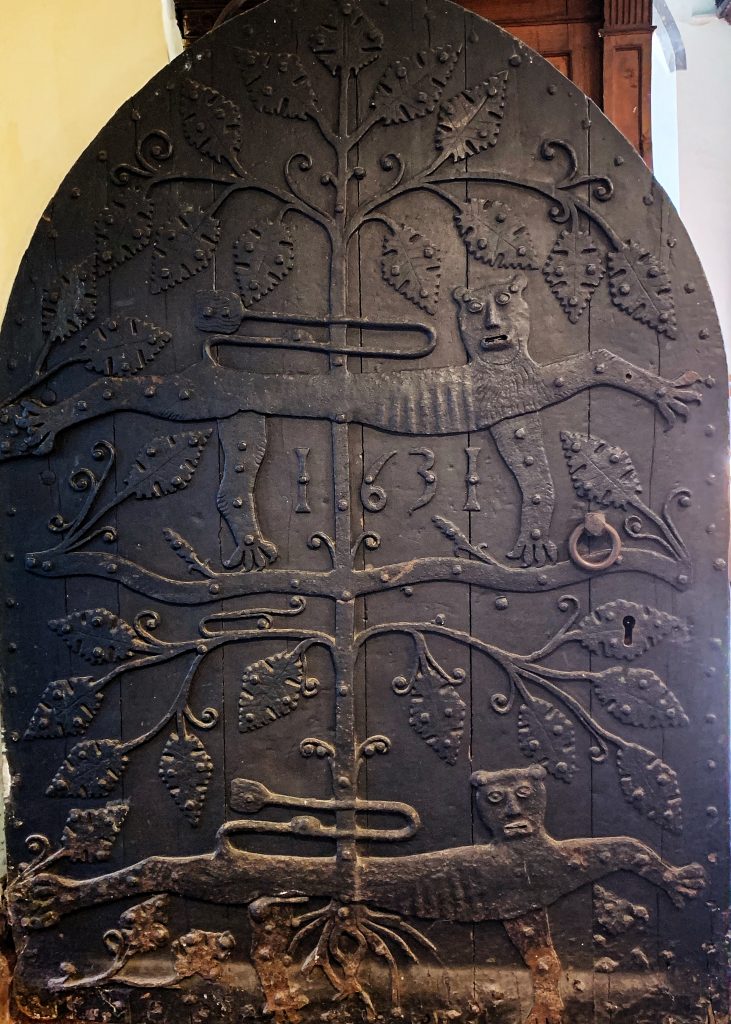 It is believed to date back to when the church was initially built but underwent major refurbishment in the 17th century and this is when the date 1631 was subsequently added.

During the 1970s the door was sent up to London for an exhibition at the Victoria and Albert museum showcasing a few of the finest Medieval ecclesiastical doors surviving in the country. At this time the wood was carbon-dated which confirmed that the oak was indeed felled prior to 1372.

The Pulpit and Rood Screen at Dartmouth Church 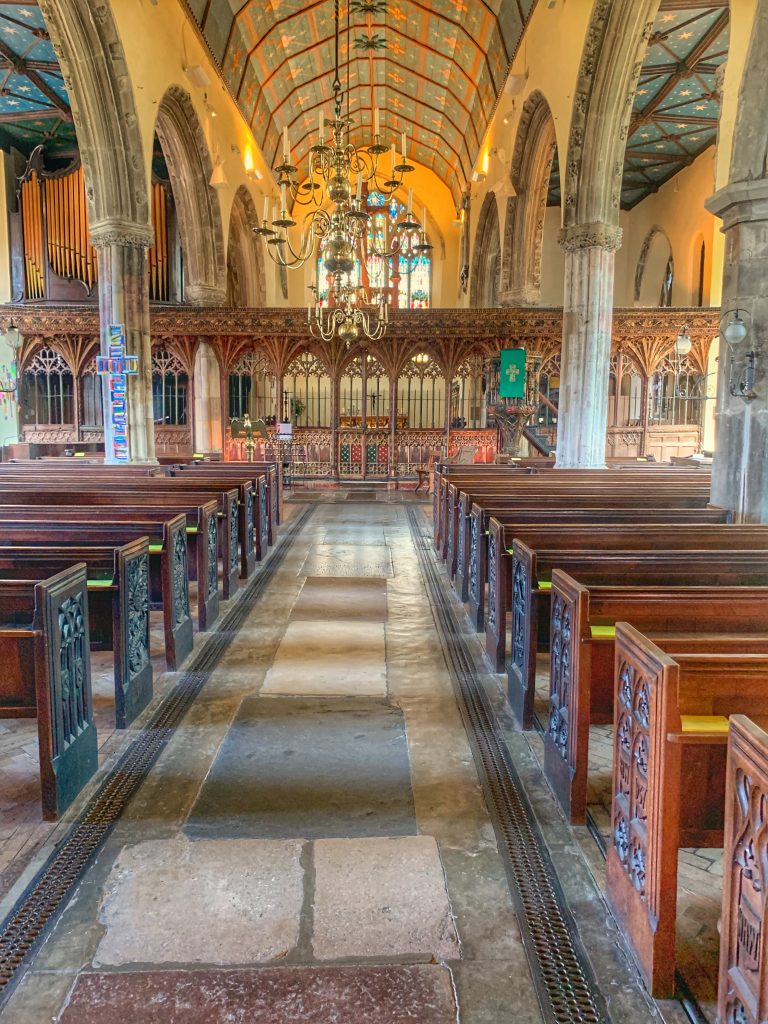 The Chancel is enclosed by a well preserved carved wooden Rood Screen that spans eleven bays and described by Pevsner as ‘unusually complete and impressive’. According to the church counts the screen was completed in the year 1496 Sadly most of the images of the saints and prophets have been very badly defaced, most probably during the time of the Reformation. The decorative parclose screens are a slightly later addition and bear the arms and also the initials of the then Dartmouth mayor, James Pelliton in 1567-1568. 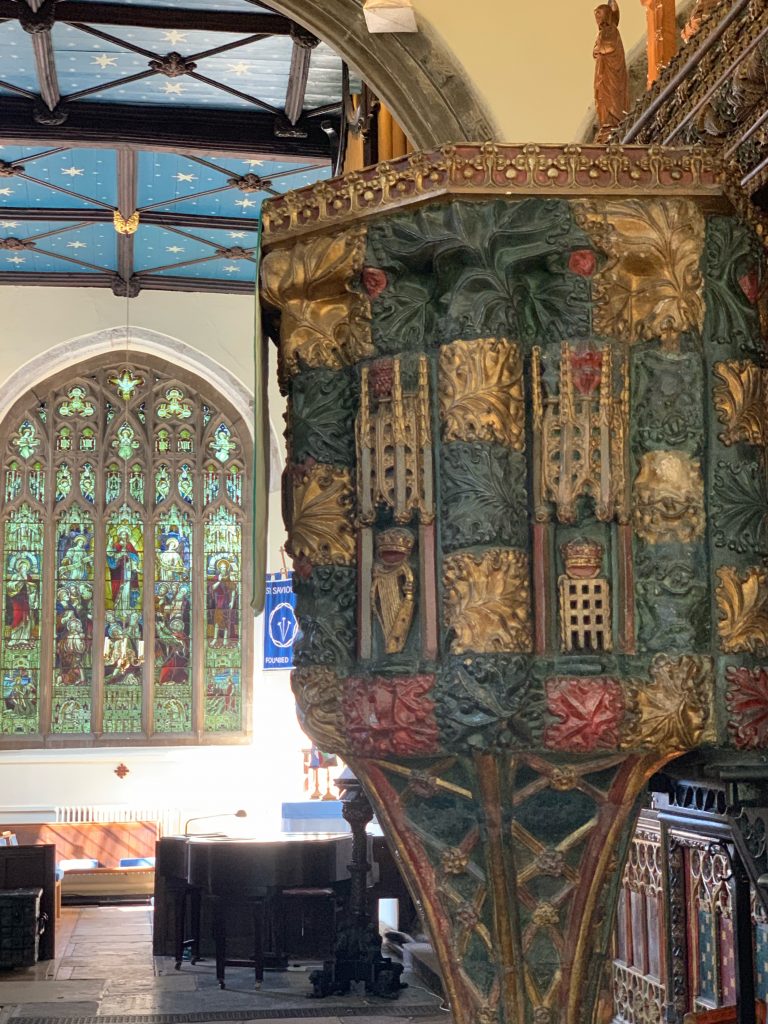 Just in front of the Rood Screen is the pulpit that predates the Rood Screen by a few years and was carved in 1490. It was originally in a more central position on the southern side but was moved to its present position in 1983.

At first glance, the pulpit appears to have been carved out of wood, similar to that of Chivelstone Church, albeit in a rather more sophisticated form. However, on further inspection it is possible to see that the structure is in fact intricately carved out of stone and then painted. It, unfortunately, suffered some damage during Cromwell’s Protectorate and a number of carved saints were removed, and most probably destroyed.

The niches where the saints once stood now contain various wooden coats of arms including the Portcullis arms of the Beaufort family and the Harp of Ireland; both of which can be seen in the photograph above. 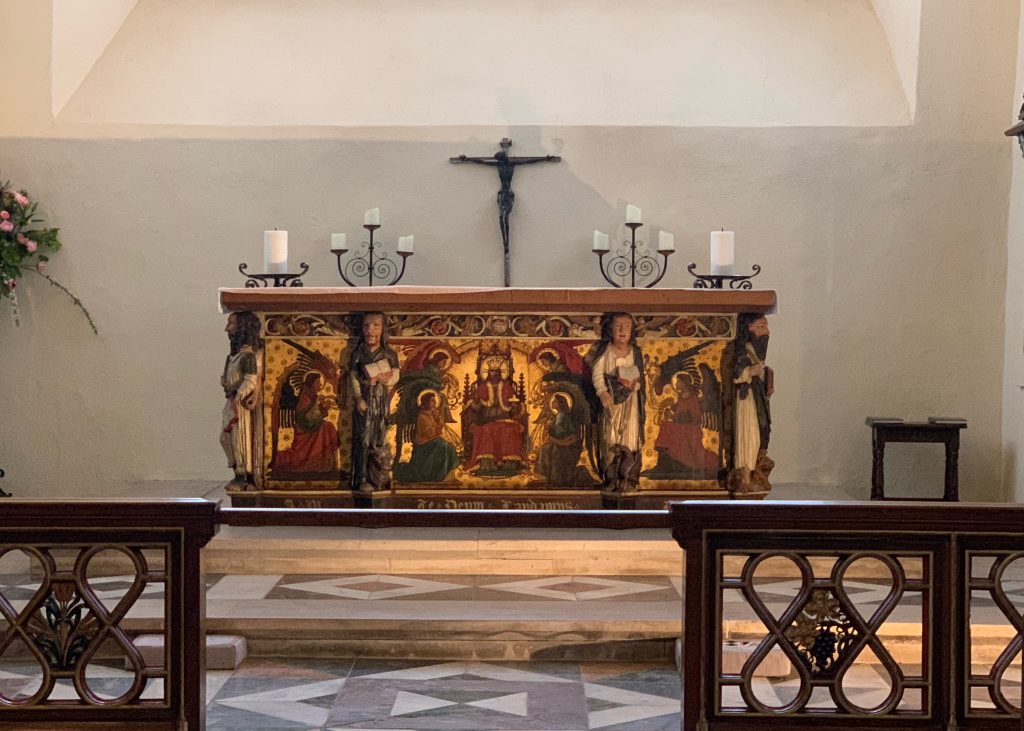 On entering the chancel that was constructed c.1402, and paid for by John Hawley II, you are immediately drawn to the highly decorative High Altar. This was created in the 19th century using the four legs of the original stone altar that was destroyed in 1552 during the Reformation like so many other churches in the vicinity, such as the Church of St Andrew in South Huish,  and indeed across the entire breadth of the country. 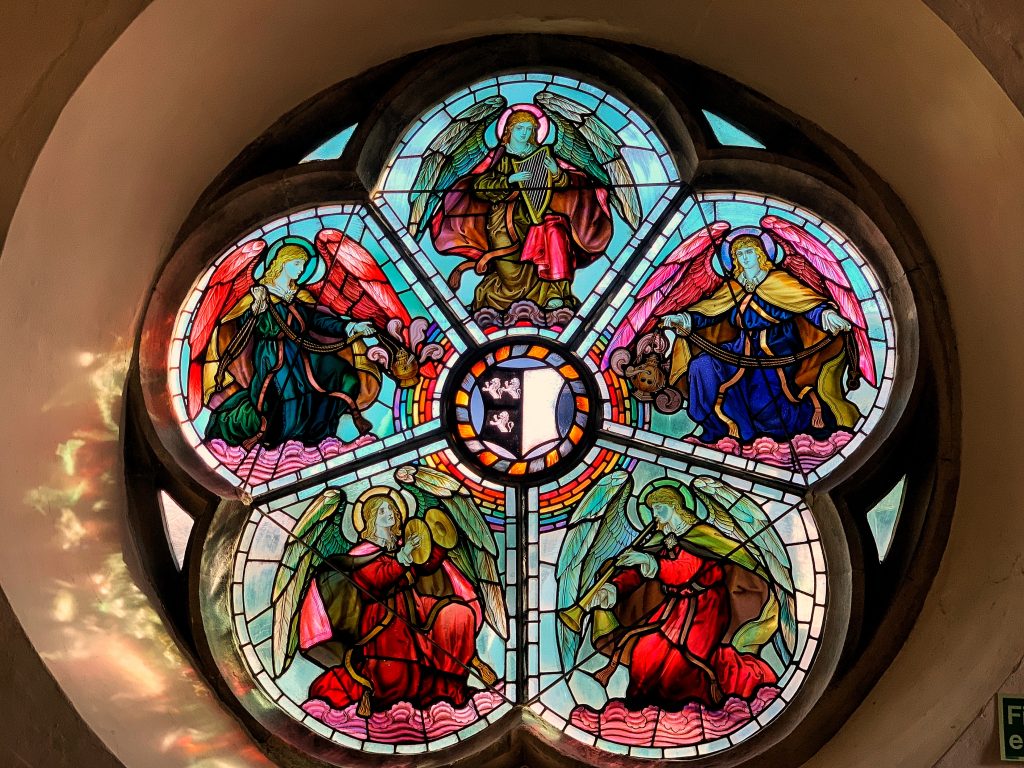 A merchant, landowner and politician, John Hawley was, just like the later famous Sir Francis Drake of nearby Buckland Abbey, a licensed privateer. For many of those involved, this was really just a formal way of legitimising piracy and for the monarch to fill his coffers by getting a cut of the spoils! Diplomacy went out the window and neutral ships were also indiscriminately raided with the king usually turning a blind eye.

Hawley managed to merge his rather nefarious activities with those of high office and was elected Mayor of Dartmouth fourteen times and became the town’s MP for two terms. It is believed that Geoffrey Chaucer, who met Hawley in 1373 on a visit to Dartmouth, based his rather ruthless shipman in Canterbury Tales on his character.

During the extensive renovation works that took place to the chancel, by EH Sedding in 1887, workmen discovered a wooden box containing a human skull that was the sole remains of Sir Charles McCarthy, erstwhile Governor of the Gold Coast (present-day Ghana).

In 1821 he was severely wounded in battle and his head removed by an Ashanti Chief. His heart was eaten but the skull used as a war trophy. It was later recovered by British troops and interred in the first British port which just happened to be Dartmouth and hence St. Saviour’s Church. 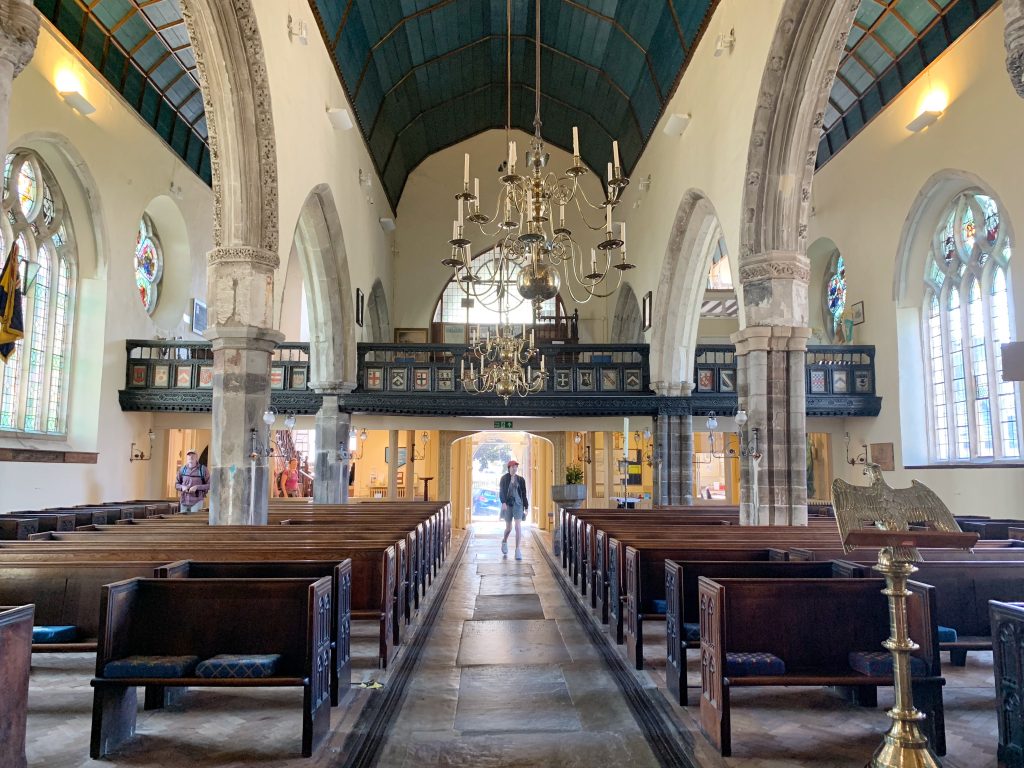 Looking down the church to the South entrance you can see the 13th/14th-century font to the north of the west entrance. Above is the fine Elizabethan-style gallery that was in fact built during the reign of James II in 1633.

It has been said that the timbers used in the construction of the gallery may be from wrecked ships of the Armada (1588) but this has never been substantiated and there is certainly a rather large time gap. However, there is an interesting naval chest on display to the front of the church that dates to the time of the Armada. 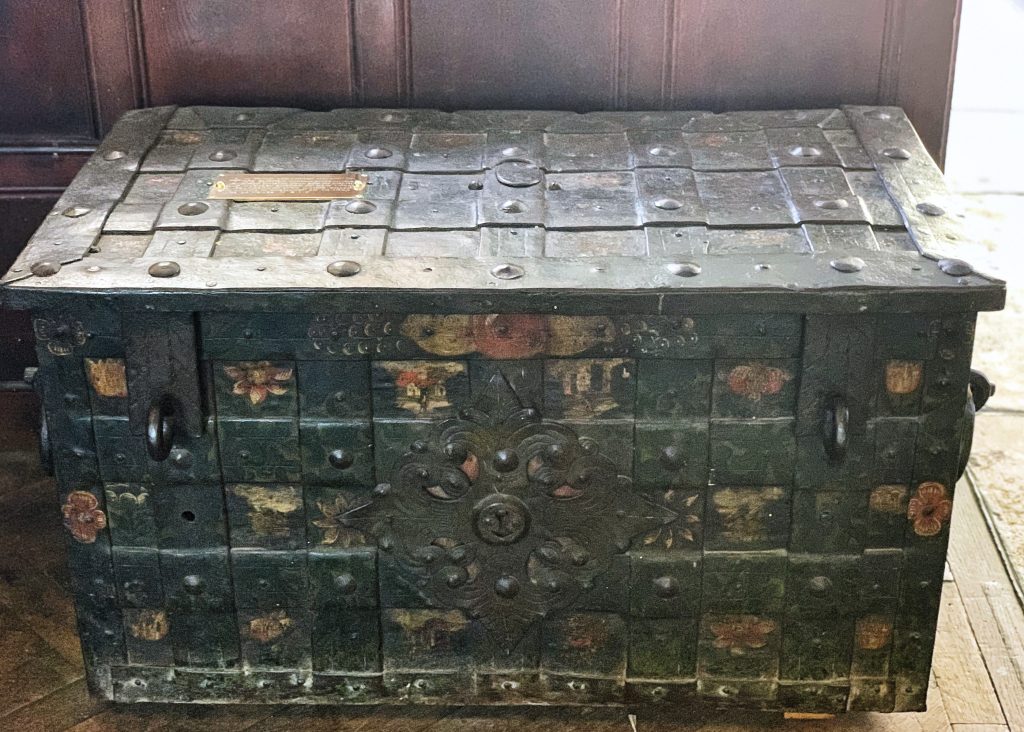 Along the front of the gallery are numerous coats of arms including those of the infamous John Hawley II, Sir John Hawkins and Sir Francis Drake. Upstairs are a number of memorials and two beautiful rose windows on the north and south walls. 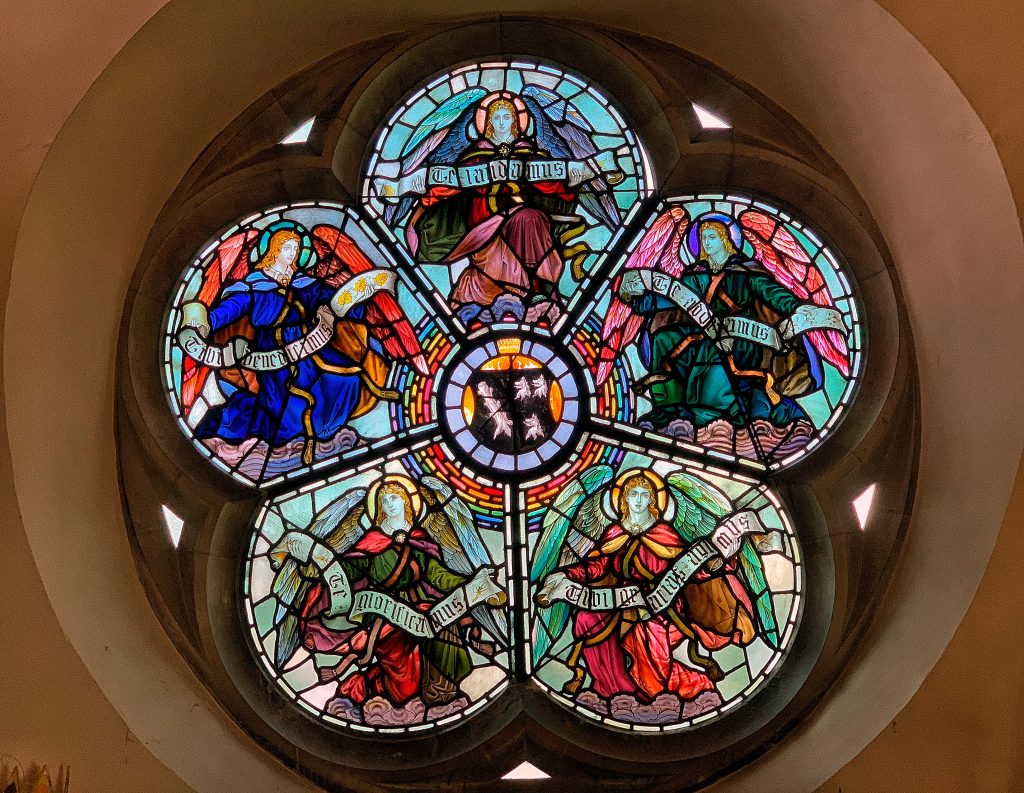 Nearby Attractions to Dartmouth Church

DARTMOUTH  – the picturesque town is chock-full of independent shops and great eateries, including Rockfish, a fish and seafood restaurant where you can experience some of the best fish and chips in Britain! An old merchant’s house is home to the local museum and was also the impromptu court to Charles II in 1671 when he was forced to sail into Dartmouth during stormy weather.

DARTMOUTH CASTLE – Begun in 1388 by John Hawley II, the fortress has ever since guarded the narrow entrance to the Dart Estuary up to the Second World War. A heavy chain was pulled up across the harbour to stop ships entering the narrow estuary and it was probably the first fortification expressly built to mount large cannon capable of sinking a ship. Now maintained by English Heritage it’s most definitely worth a visit.

BEESANDS – A popular small fishing village that is within easy walking distance of Start Point lighthouse, Slapton Sands and the lost village of Hallsands. Perfect for a tranquil stroll along the beach or a great lunch at either the Cricket Inn or Britannia on the Beach. For more inspiration, check out this guide to the best of Beesands. 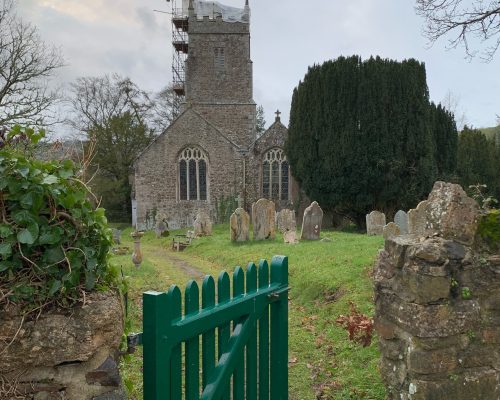