The term Slow-worm is a true misnomer as the graceful creature is neither slow nor a worm. Anguis fragilis, to give it its Latin name, is often mistaken for a snake but is in fact a legless lizard. 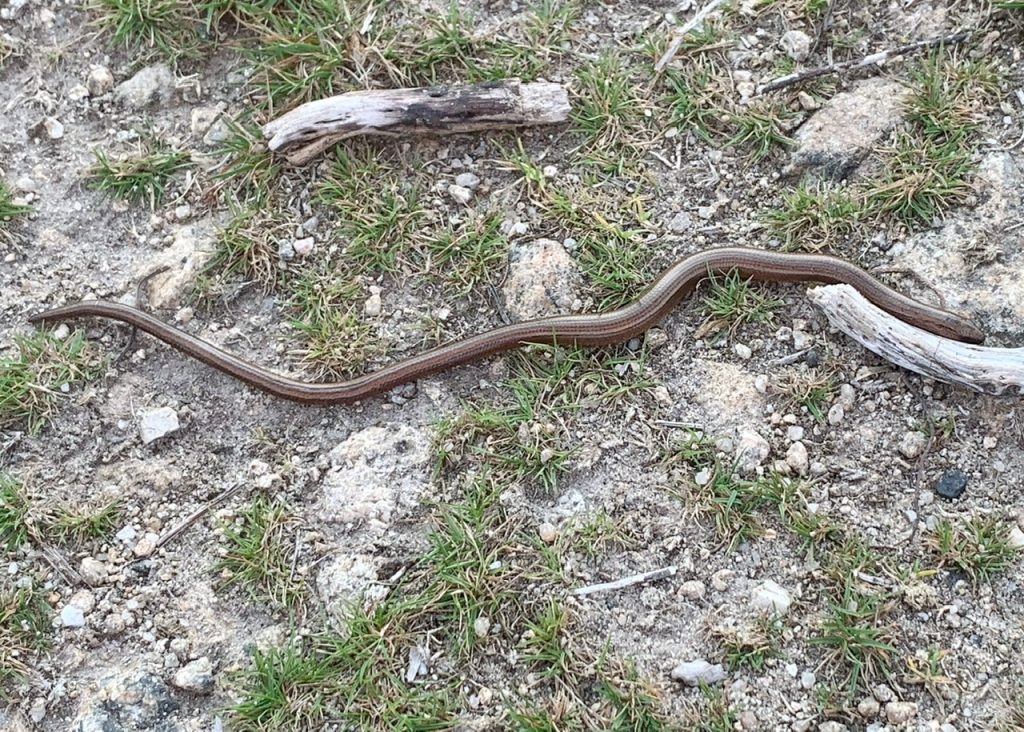 Anguis fragilis is commonly known as a slow-worm (spelled slowworm in the U.S.) which is a derivation from the old Anglo-Saxon word slawyrm; and is commonly referred to as a blind-worm in historical literature.

The slow-worm which is, in fact, a legless lizard, is a member of the large and diverse Anguidae family that’s native to the Northern hemisphere. There are just three species of lizard that are native to Britain and only the slow-worm is legless. It’s heritage dates all the way back to the late Cretaceous period (c.66-100 million years ago). 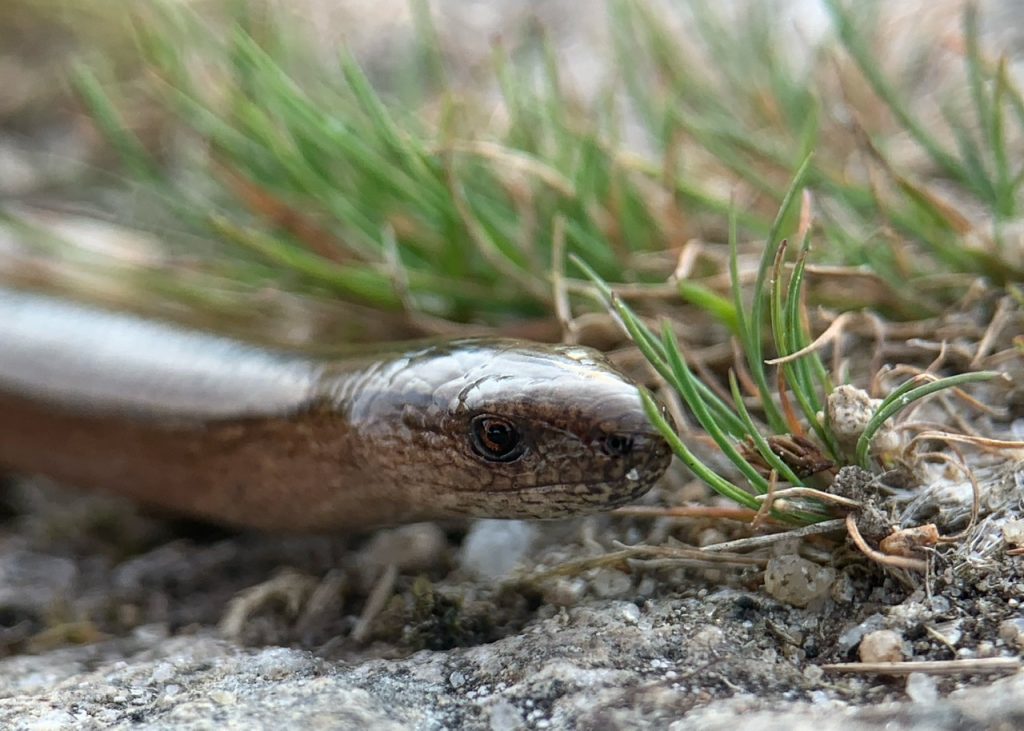 It was Carl Linnaeus, the famous 18th century Swedish botanist and zoologist, who first gave the elegant creature its Latin name. Like its common name this term is also rather misleading as Anguis means snake. Fragilis, though, is more understandable as the slow worm is capable of losing its tail as a deterrent to would-be predators.

What is the difference between a snake and a slow-worm?

There are a number of features that distinguish the two reptiles. Perhaps the most obvious is the fact that unlike a snake the lizard has eyelids and blinks. Its eyes are much smaller proportionately than that of a snake, so, this may be why it has historically been called a blind-worm. The slow-worm also has small ear openings, whereas snakes have no visible ears but ‘hear’ through vibrations. 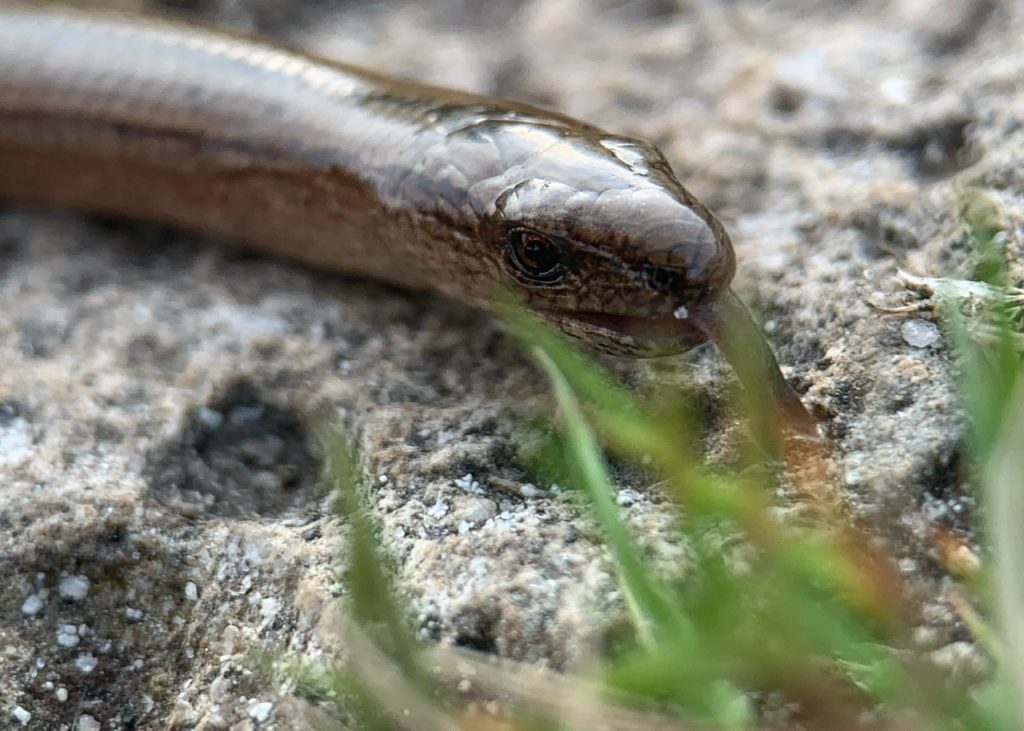 The metallic coloured lizard has a head that seems to merge with its glossy uniform cylindrical body as there is no visible tapering around the neckline. Perhaps this is the reason it’s been called a worm rather than a snake throughout history, as well as its propensity to burrow deep into the ground.

Snakes stick their forked tongues out of closed mouths. The slow-worm, however, has to open its mouth to stick out its black flat notched tongue.

With a mature length of between 40-50cm and a weight of just 20-100g it’s much smaller than the three native British snakes – grass snake, smooth snake and adder.

Slow-worms are native throughout mainland Britain apart from Ireland. St. Patrick must have been confused about their status too! The shy harmless creatures live in grassland, woodland, meadows, moorland and even gardens and allotments.

They love moist shaded areas and heat, so, it’s not surprising that they’re often discovered in garden compost heaps  These elusive carnivorous creatures can occasionally be seen basking in the sun on rocks or a log pile. They emerge at dusk to hunt their prey which comprises of slugs, snails and other small invertebrates. All in all a great asset to gardeners! 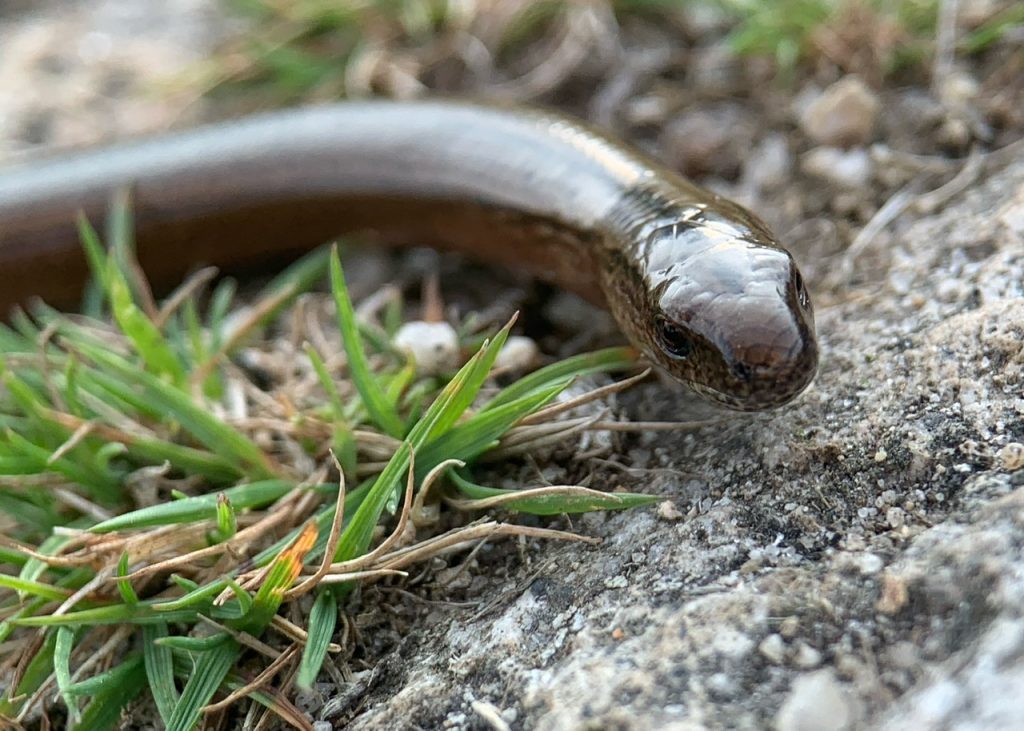 Unfortunately, these beautiful creatures have numerous enemies which look upon them just as a tasty morsel. Adders, hedgehogs, badgers and various bird species all have slow-worms on their menus; but, domestic cats are, by far, the greatest threat. However, if a slow worm does manage to keep a low profile and evade its numerous predators, it can live up to 20 years in the wild.

You won’t see any slow-worms during the winter months, once the temperature drops, as they hibernate either in crevices or burrowing underground below the frost line. This is generally from around October to March, but of course, is weather dependent. 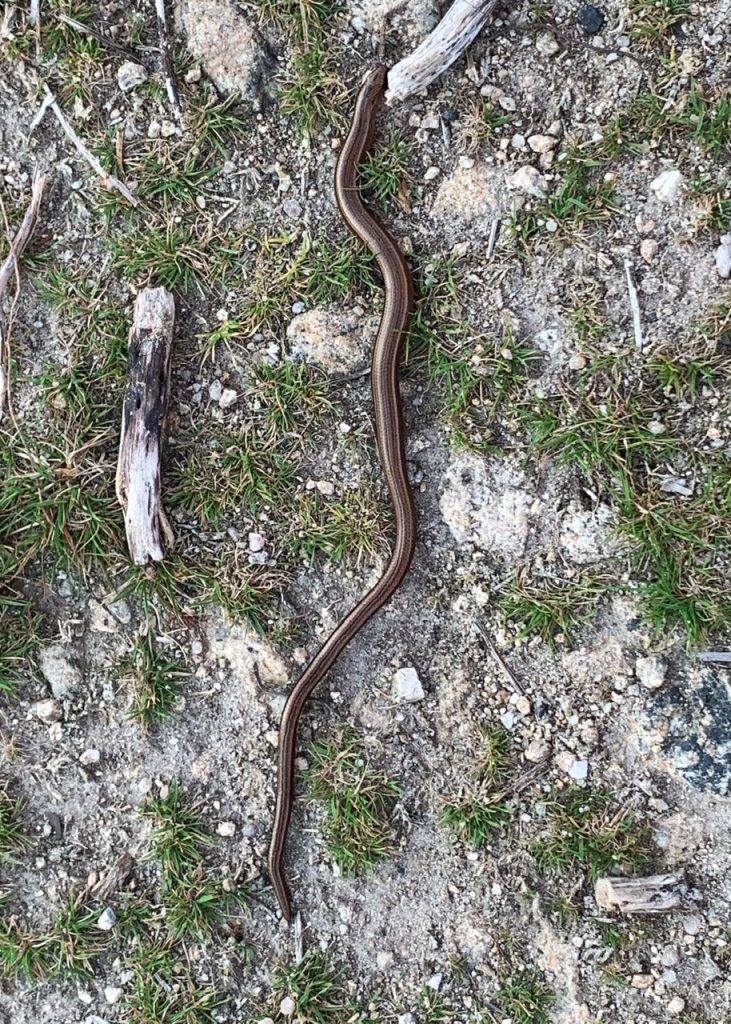 After a pretty tortuous marathon mating session which can last anything up to 10 hours, the female finally gives birth to its young 3-4 months later (anytime from mid-August-mid-September).

Like most reptiles, the female produces eggs. However, being ovoviviparous means that rather than laying eggs she incubates them within her own body and then ‘gives birth’ to an average of 8 baby slow worms that are already approximately 7-10 cm in length. It can take up to eight years for the young to reach their full size.

Eye of newt, and toe of frog,

Wool of bat, and tongue of dog,

For a charm of powerful trouble,

The harmless slow-worm (a.k.a. blind-worm) has been much maligned in historical literature. Even the great Bard himself mentions it, in a couple of his plays, as a poisonous creature to be greatly feared.

George Abbey in his book The Balance of Nature and Modern Conditions of Cultivation (1909) refers to these fears as follows:-

“… Country people, like Shakespeare, regard it as the ‘eyeless venomous worm’ and have a dread of the ‘blind-worm’s sting’ but both without cause,as it rarely bites, and scarcely makes any impression on the skin, its teeth being very small…” 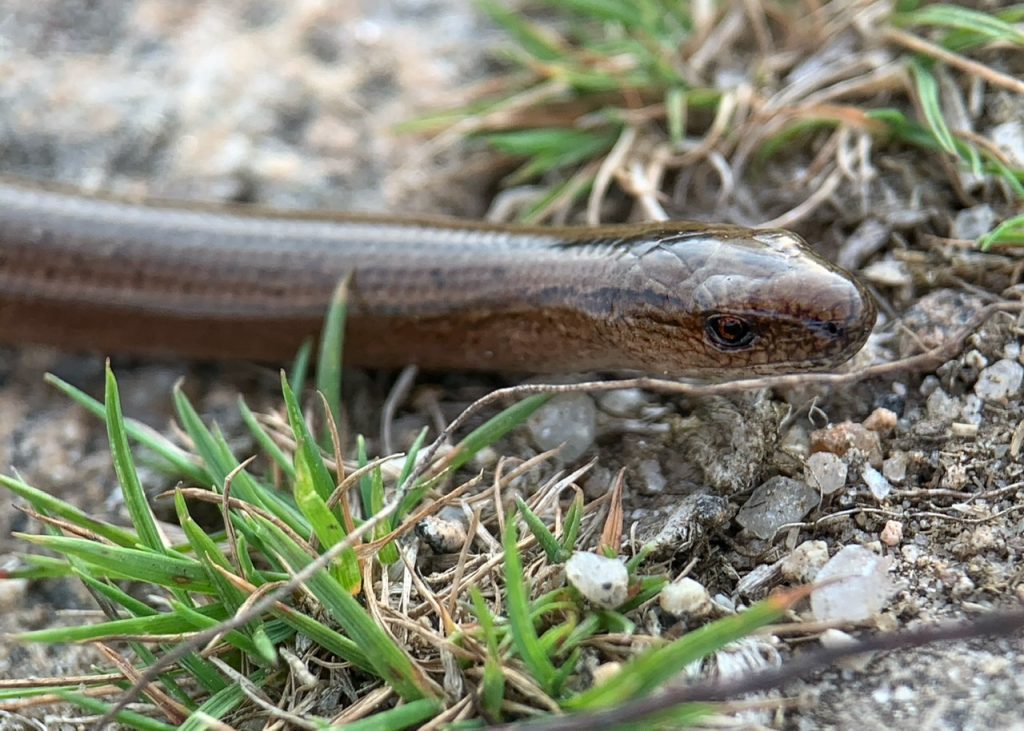 And finally… Can the slow-worm really lose its tail and survive?

The slow-worm can and does shed its tail as a form of defence. This is in line with most of its relatives within the lizard family. The detached tail is up to 5 cm long and acts as a deterrent, drawing the attention of the predator to it rather than the animal itself.

The nerves continue to make the tail thrash around quite violently for anything up to 30 minutes. Quite a disturbing spectacle, but this allows the slow-worm to make a quiet getaway or even remain immobile and play dead. However, it can only use this tactic once in a lifetime and it can take quite a while for its new tail to regrow.

This new appendage is, unfortunately for the slow-worm, no longer detachable. It can be fatal for a young animal if the loss of its tail happens close to winter. The energy required to repair itself can end up using all the creature’s reserves that were stored for the hibernation process itself.

* SLOW-WORMS ARE PROTECTED UNDER THE WILDLIFE AND COUNTRYSIDE ACT, 1981 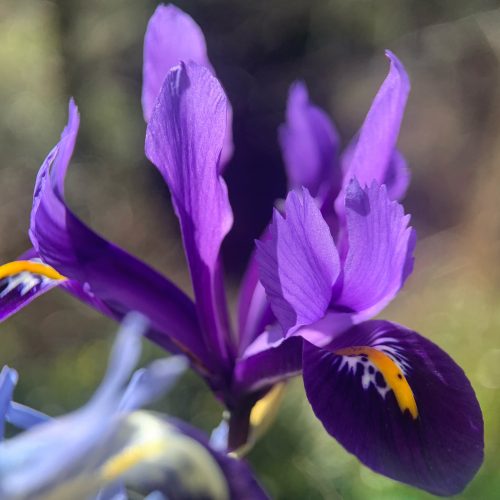 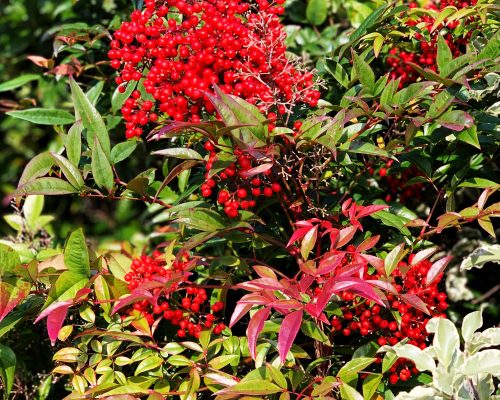 Three Plants to Brighten up Your Late Winter Garden