The gleaming spire of Buckfastleigh Church stands proudly on the hill rising high above the small market town of Buckfastleigh and the famous Buckfast Abbey. What isn’t obvious from a distance is that this ancient church is just an empty shell – a ruin, albeit a fairly well preserved one. It is the final resting place of Richard Cabell, a local squire, whose infamy is said to have been the inspiration for Sir Arthur Conan Doyle’s classic novel, The Hound of the Baskervilles. 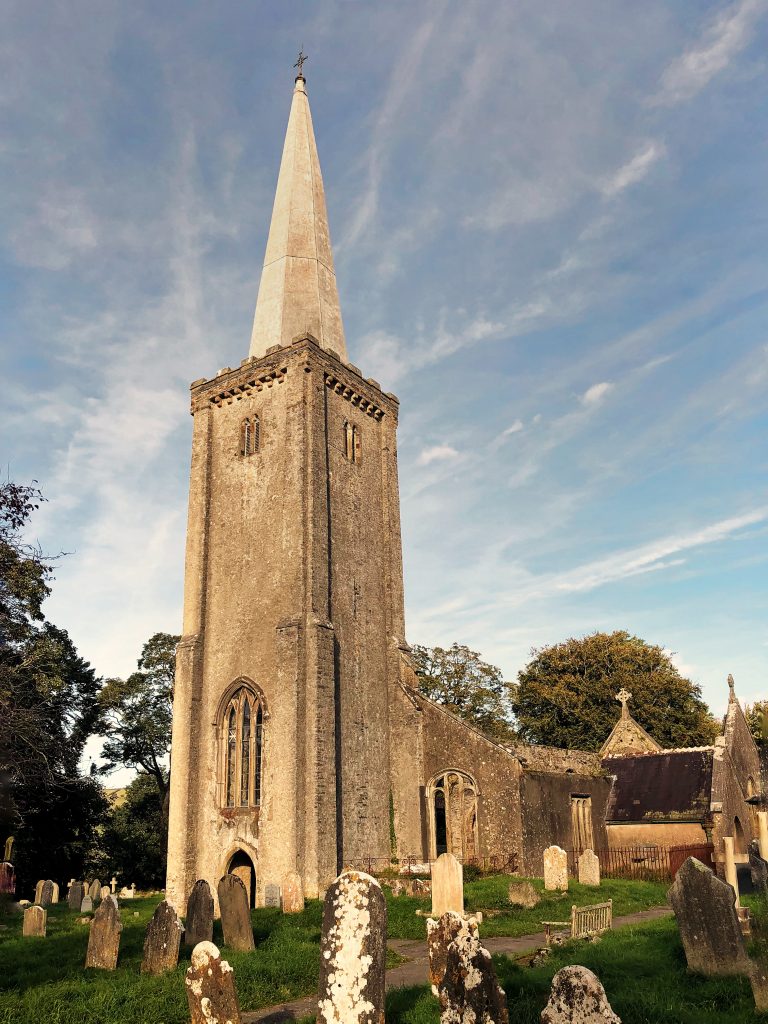 A Series of Unfortunate Events at Buckfastleigh Church (Holy Trinity)

The late 13th century Trinity Church has had a somewhat checkered past. Perched high atop a rocky outcrop, its isolated aspect has made it the perfect location for nefarious deeds carried out under cover of darkness. It’s been a target, on multiple occasions, of arsonists, vandals and even body snatchers. To add insult to injury meteorological events have also wreaked havoc, the tower being struck by lightning due to its elevated position. 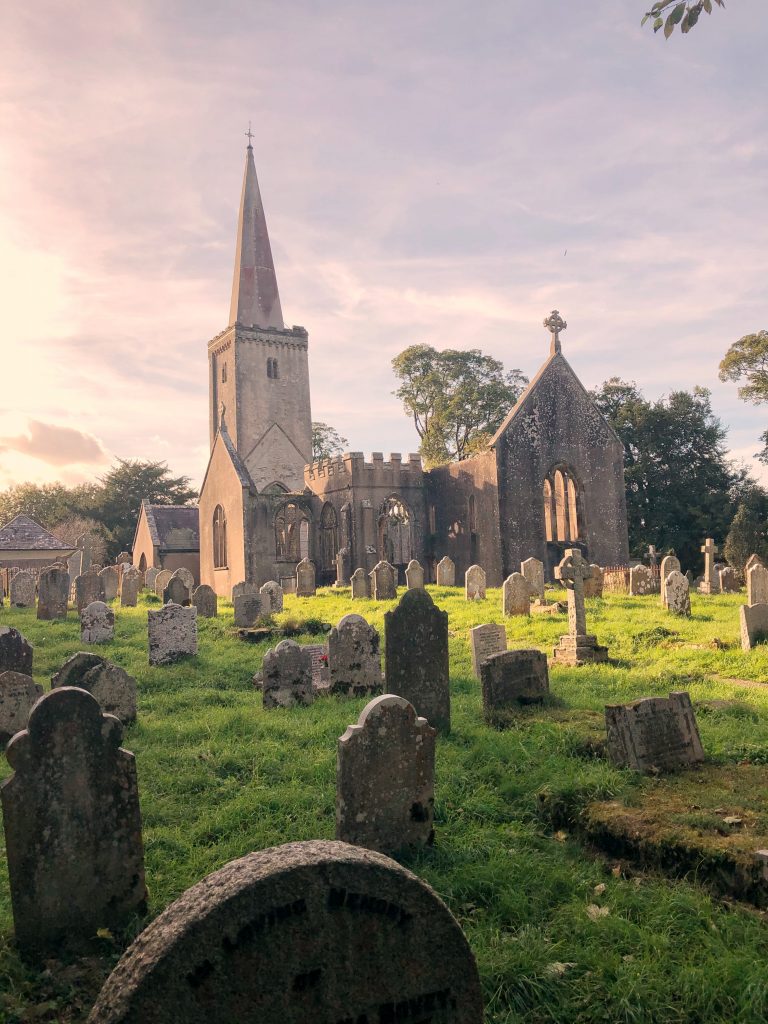 In 1849 a fire, potentially deliberate, destroyed the vestry, north aisle roof and also the altar. This is noted in “The History, gazetteer and directory of the County of Devon…” by William White – 1878/9

‘In the south transept is a mural tablet in memory of the late Admiral Thomas White, of the Abbey House, who gave the rich furniture of the altar, which was destroyed by fire in 1849…’

Just twenty-five years later, in 1884, the tower of Trinity Church was struck by lightning and had to be rebuilt. During World War II a number of the stained glass windows were destroyed after a bomb exploded in the vicinity. 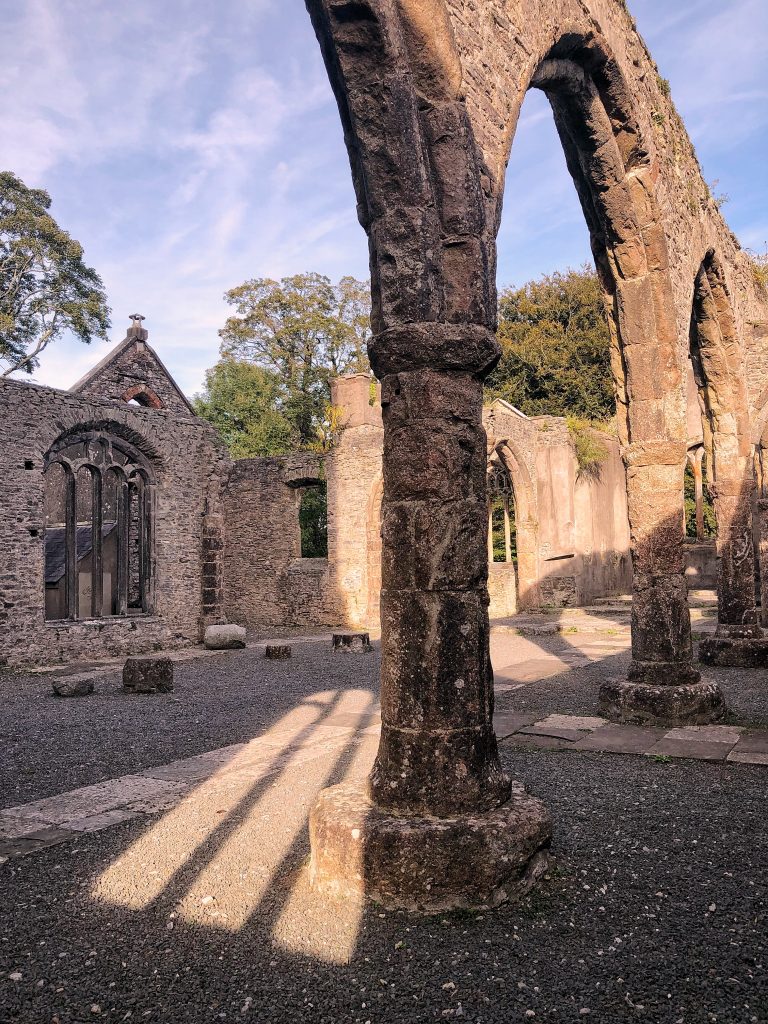 This catalogue of misfortunate events was to continue and on the 21st July 1992 the church was broken into and set ablaze. However, this time, unlike the previous 19th century conflagration,the church was totally gutted and the heat so intense that it shattered the ancient Norman font. It’s believed that the fire was started deliberately beneath the altar and, although unproven, rumours persist that Satanists were involved.

In the 18th and 19th centuries the church, or more precisely its graveyard, was a popular site for resurrectionists. These were people into body snatching for financial gain, usually selling the corpses to medical establishments for either dissection or lectures in medical schools. 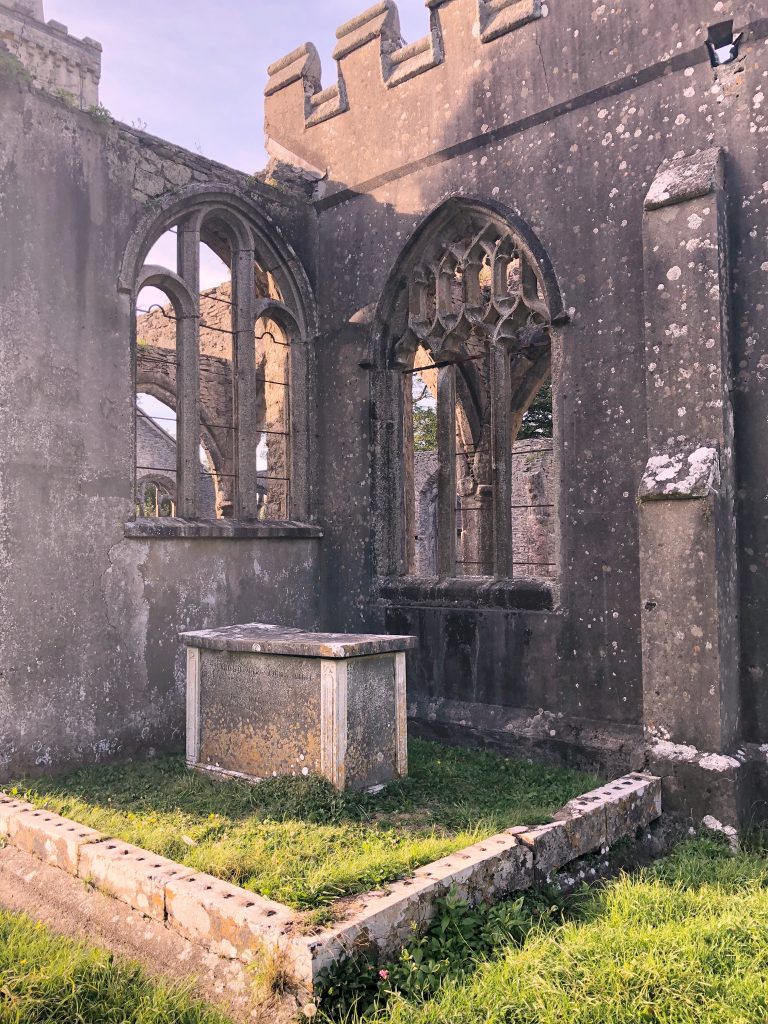 Until the Anatomy Act of 1832 only the bodies of convicted criminals were available legally for medical science and therefore creating a large opportunity for the black market trade in bodies recently exhumed. In Exeter, a new hospital  was opened in the Southernhay area in 1743 and the Dock and Stonehouse Public Dispensary was established in Devonport in 1815 with Buckfastleigh located almost midway between.

The History of Holy Trinity Church at Buckfastleigh

Between 2002 and 2005 a joint Research Project was carried out on the site by University College London and Dartmoor National Park. Excavations have established that the Medieval Trinity Church is built upon an earlier structure dating to the late Saxon period and is perhaps the site of the first Buckfast Abbey, which was already known to be in existence by 1018 A.D. 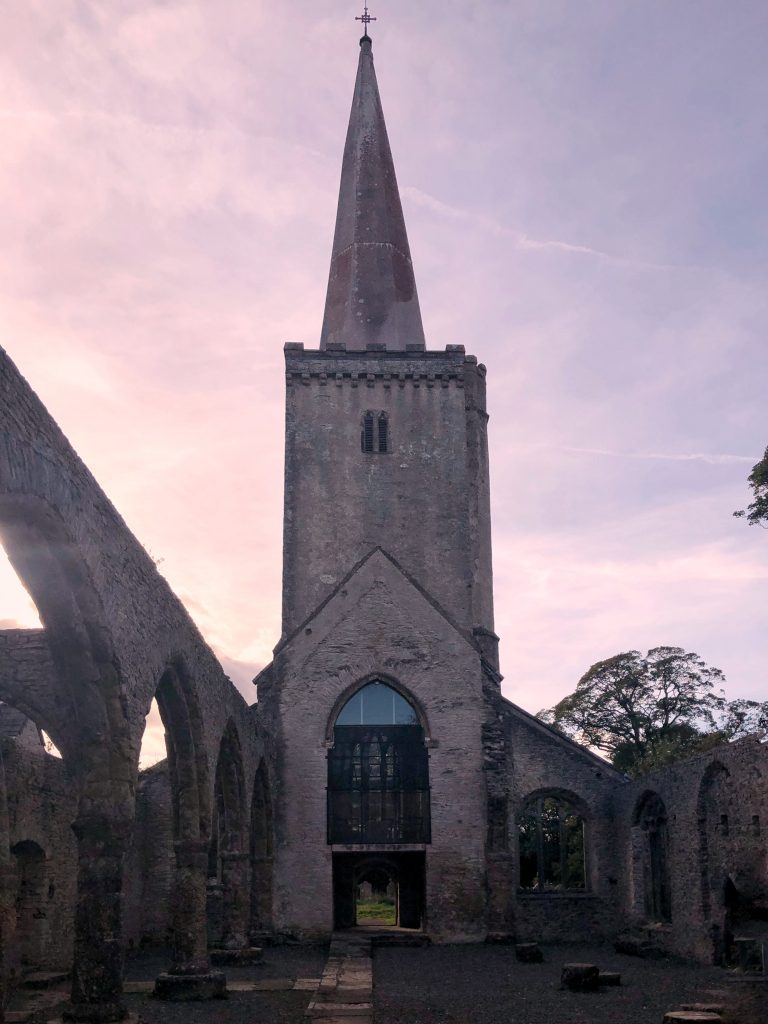 The tower, chancel and transepts were constructed in the 13th century with the aisles and chancel chapels added in the 15th century. By the mid 19th century the building had fallen into a ruinous state and underwent major restoration. William White in his “The History, gazetteer and directory of the County of Devon…”- 1878/9:-

‘The parish church (Holy Trinity) stands on an eminence, ascended by 197 steps, and is a large antique structure, which, after being in a shamefully neglected state, has been restored and beautified since 1844, at a cost of more than  £1,400…’

After the last fire in 1992 the Grade II* listed building stands open to the elements apart from the tower which has been restored and houses the church bells. The church remains consecrated and occasional services are conducted at the church, including weddings; and the graveyard is still open for burials. 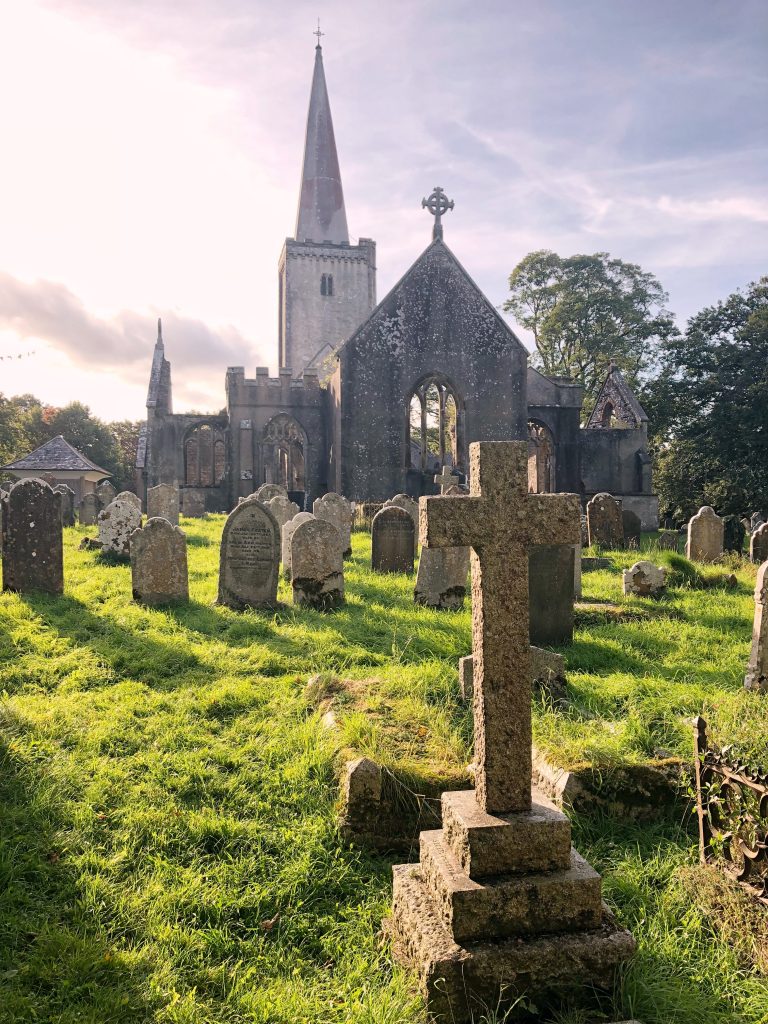 Situated on the south side of the church is a rather ugly plain building with a pyramidal roof that looks more like a bus shelter than a mausoleum. This unprepossessing structure is the source of legends and folk tales that have persisted for more than three hundred years and is allegedly none other than the burial place of Richard Cabell III who died in 1677. It’s known locally as The Sepulchre.

The names of Richard I and Susanna Cabell who died in 1612 and 1597 respectively and their son, also named Richard II (d. 1655) are inscribed on the chest tomb but there is no mention of the later purportedly evil relative who died in 1677. The mausoleum was constructed in 1656. 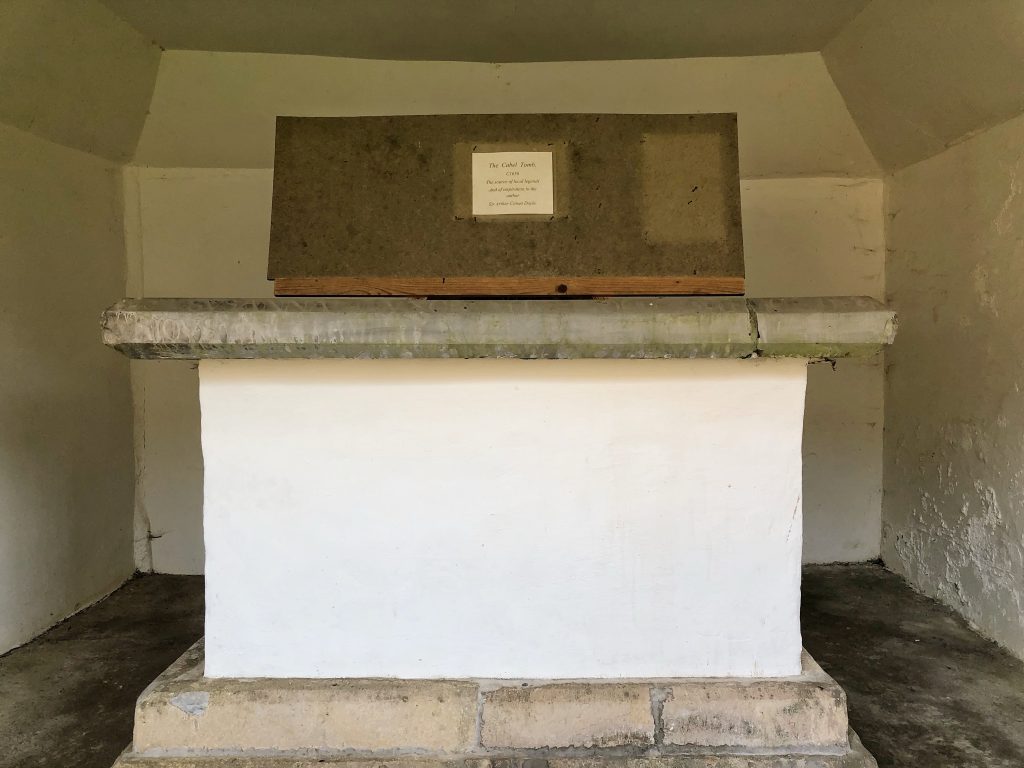 Sir Howard Colvin (1919-2007), an eminent British architectural historian, identified this building as being one of the two earliest freestanding mausolea in England. The other was erected in the same year, 1656, in Maulden Churchyard in Bedfordshire and is known as the Aylesbury Mausoleum.

Richard Cabell III was perhaps responsible for erecting the family mausoleum in 1656 and may well be buried there with his family. What is less clear is whether he truly was as evil as recounted, or somebody bore a huge grudge and decided to do a major character assassination posthumously. Whatever the case Richard Cabell III has certainly been depicted as a very nasty piece of work throughout the centuries.

Tales abound of him having made a pact with the Devil and murdering his wife. Whatever the truth they persist to this day – would you really want to be alone in Holy Trinity Churchyard at night?! 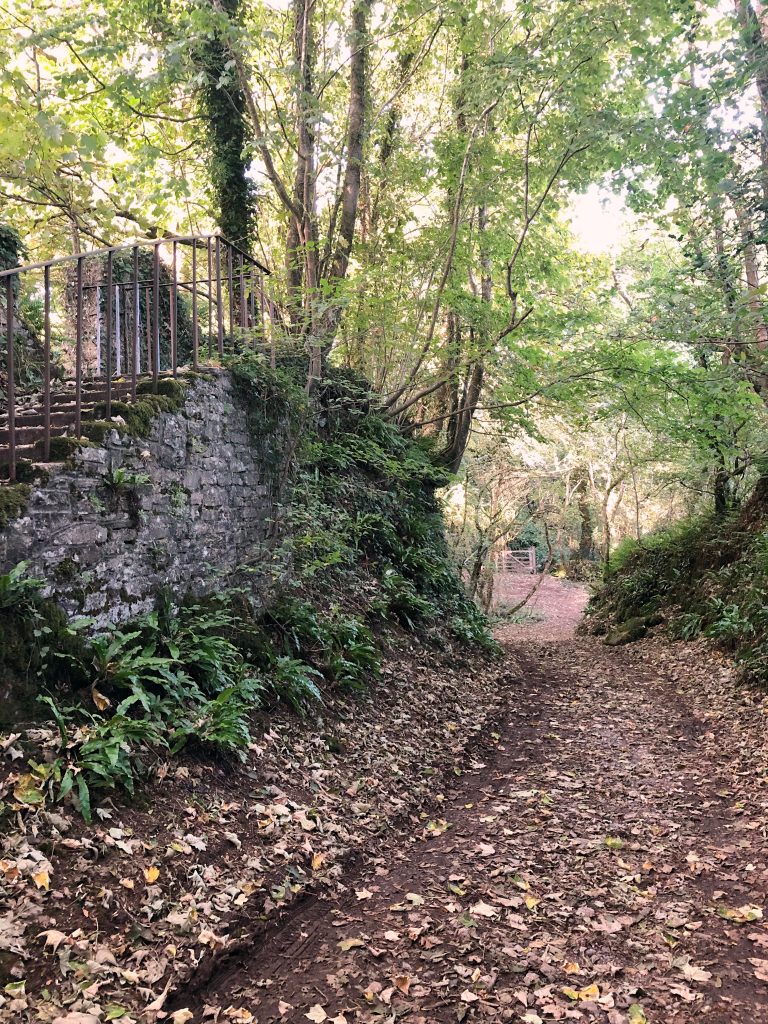 The Reverend Sabine Baring-Gould (1834-1924) was an enthusiastic antiquarian who carried out the first archaeological excavation on Dartmoor at Grimspound and also wrote extensively about the supernatural legends of Devon.

His description of Richard Cabell’s tomb in “Devonshire – The Little Guides” 1907 says it all:

‘Before the S. porch (of Holy Trinity) is the enclosed tomb of Richard Cabell of Brooke, who died in 1677. He was the last male of his race, and died with such an evil reputation that he was placed under a heavy stone, and a sort of penthouse was built over that with iron gratings to it to prevent his coming up and haunting the neighbourhood. When he died the story goes that fiends and black dogs breathing fire raced over Dartmoor and surrounded Brooke, howling.’ 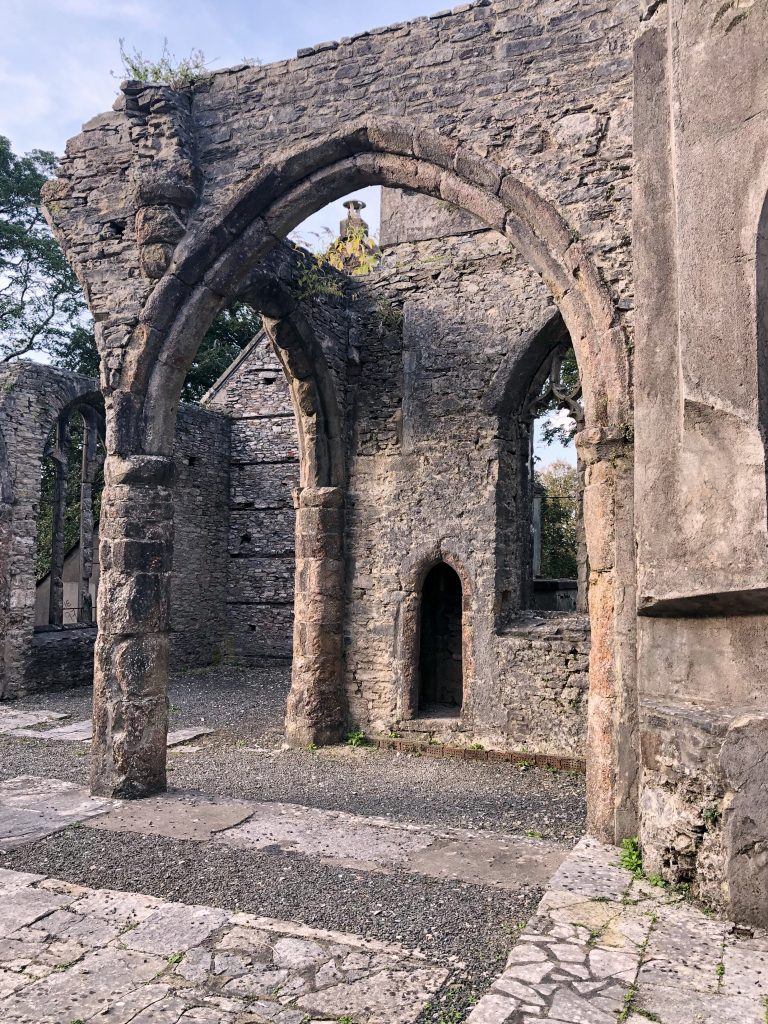 Hound of the Baskervilles and Richard Cabell

It’s believed that Sir Arthur Conan Doyle found inspiration for the Hound of the Baskervilles whilst conversing with his great friend Bertram Fletcher Robinson (1870-1907) on a voyage back from South Africa in July 1900.

Robinson, editor of the Daily Express at that time, had spent his childhood growing up in Ipplepen, not far from Buckfastleigh, and regaled Conan Doyle with the dark supernatural tales of Richard Cabell and the diabolical fiery hounds.

The following Spring of 1901 Conan Doyle visited Dartmoor and stayed at the Duchy Hotel at Princetown. It’s not known whether he visited Buckfastleigh in person but Richard Cabell certainly had  a large influence in the creation of the evil Sir Hugo Baskerville and thus the entire plotline. 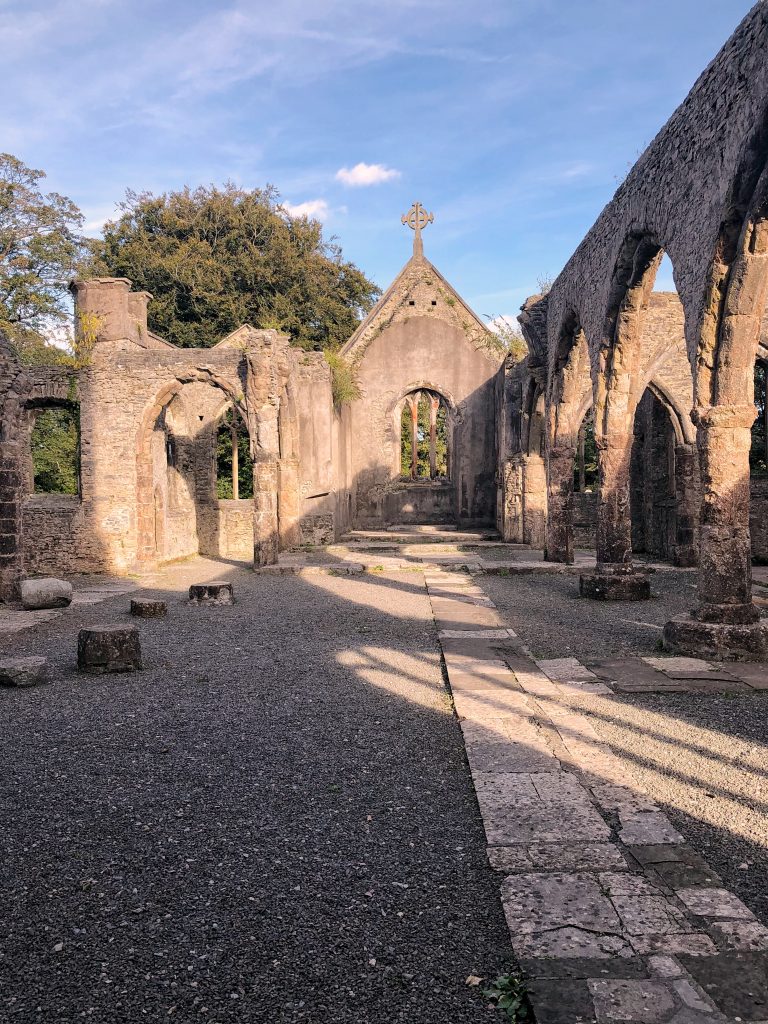 There are a number of conspiracy theories out there that purport Robinson had in fact, come up with the original script and that Conan Doyle was guilty of plagiarism.

Whatever the case may be, there is a footnote to the first edition of The Hound of the Baskervilles by Conan Doyle and simply states:

‘This story owes its inception to my friend Fletcher Robinson who has helped me.’

BUCKFAST ABBEY – Just down the hill from Holy Trinity Church you’ll find the magnificent Benedictine Abbey which was built by the monks themselves and completed in 1938.

HILL HOUSE NURSERY – Whether you’re an avid horticulturalist or just love mooching round a beautiful garden and then enjoying a delicious lunch or leisurely cream tea, Hill House Nursery in Landscove is definitely your go-to destination.

Does Bovey Tracey Parish Church really have links to Thomas Becket and Henry VII?
Here’s Where to Find the Best View of Warwick Castle 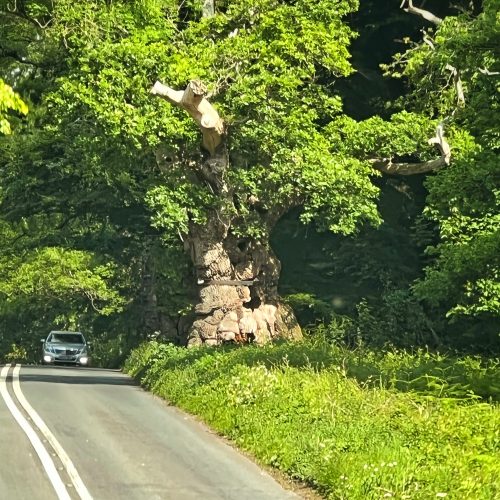 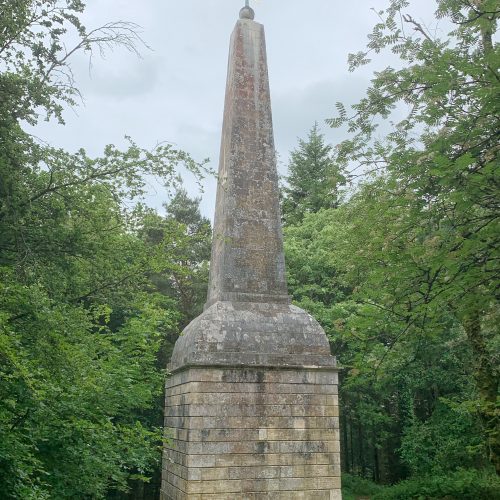