The attractive sleepy little village of South Milton is found just a mile inland from the well-known beach of the same name – South Milton Sands. Perched on one of the verdant rolling hills typical of the South Hams, you will discover the ancient Church of All Saints with its quirky blend of old and new furnishings, overlooking the village.

A Brief History of the Church of All Saints

The village of South Milton was listed in the Domesday Book (1086) as the Manor of Mideltone which at that time had around 15 households. It was held by Alfred the Breton who was one of the tenants-in-chief to King William I (ie. the Conqueror).

It’s believed there was a church in the village prior to the Norman Conquest, when the lands were still held by Anglo-Saxon thanes. There’s no written documents pertaining to the church before a licence for a chapel was granted by Bishop Branscombe in 1269.

The south wall contains sections of an early Norman Church and the Font, described below, is early Norman. The church was rebuilt and enlarged in both the 13th and 15th centuries. The most recent addition to the structure is the porch that was probably constructed in the 17th century.

The Unusual Font at All Saints Church at South Milton

By far the most bizarre and unusual feature in the Grade I listed church has to be the font, which is thought to be early Norman. The naive figures appear, at first glance, to be pagan, but the cable moulding around the base is pure Norman. Similar Norman fantastical fonts can be seen at the Church of St Nicholas and St Peter ad Vincula in Curdworth, Warks. and the magnificent tub font at the Church of St James in Avebury, Wiltshire.

The great British artist, John Piper (1903-1992), was obviously intrigued by early fonts as he photographed a number of those in Devon Churches between the 1930s-1980s. In 1987 he presented these photographs to the Tate Gallery and they can be viewed in the Tate archive.

Another very early object to be found in the church is a charming small bronze crucifix that was ploughed up at Trendwell Farm in 1961.

It now hangs on the east wall of the Chapel in the South Transept and has been dated to c.1150AD and (probably) English by the Victoria and Albert Museum.

The 15th Century Rood and Parclose screens have been extensively restored, but sadly, as with virtually all other churches, the Rood and Rood Loft were most probably destroyed during the Reformation. (Avebury Church is one of a handful where the rood loft was saved by parishioners who dissembled it and stowed it away.)

The twenty-six saints that are depicted on the screens are highly unusual in that every one is dressed in a simple white garb (compared to the jewel-like colours that can be found at the Church of St John the Baptist at Ashton in the Teign Valley).

When the church was restored in 1855 a decision was taken to remove the late 18th-century reredos from behind the altar. It completely blocked out the light from the east chancel window and so was it was placed in its current position on the south wall.

Moses and Aaron are the prominent figures in a temple and were painted in 1792. They are flanked on either side by the Ten Commandments.

The chancel at All Saints is a true juxtaposition of old and new, the Rood Screen and barrel vaulted ceiling marry perfectly with the attractive oak reredos that was installed in 1926 and the stunning window in the east window.

The stained glass was created as a memorial by the Bideford artist James Paterson and was dedicated in 1956.

… and finally, the Gate Lantern

On leaving the church take a minute to admire the magnificent rolling countryside and note the copper lantern hanging over the gate. It originally hung over the entrance of the Kingsbridge Workhouse.

South Milton Sands – Just a mile from the village is a popular long sandy beach with the iconic Thurlestone Rock standing majestically out to sea. A small wooden shack – the Beachhouse – offers fantastic food, and as you would expect, a wide range of seafood.

Hope Cove – Just down the coast is the attractive historic village that boasts a couple of sandy beaches protected by the headland -Bolt Tail and numerous places to dine.

Totnes – The bustling market town is located on the River Dart and overlooked by an 11th century Castle constructed by a Norman knight – Judhael de Totnes.

Evershot: A Picturesque Village In the Heart of Hardy Country
Finch Foundry at Sticklepath: Industrial Heritage on Dartmoor 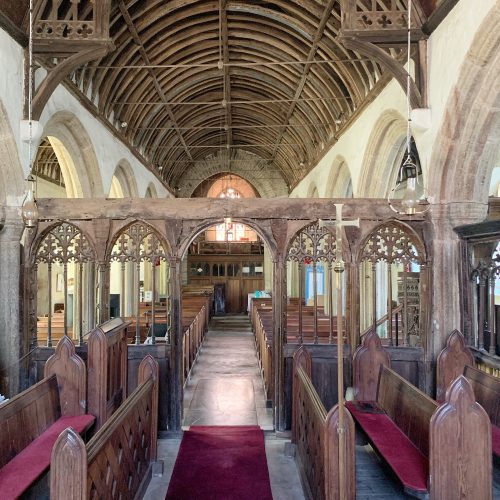 An Ancient Pulpit at Chivelstone Church in the South Hams 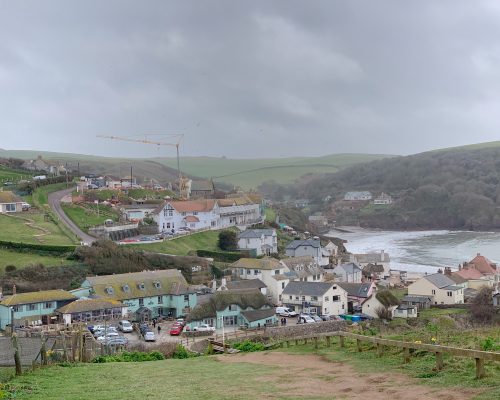 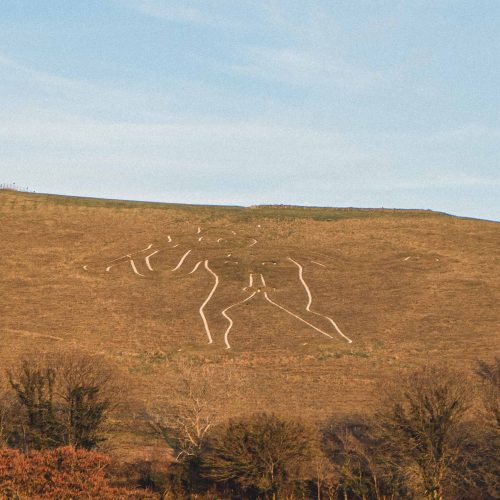